Looking for a night out with a twist?  Look no further than the Evans & Peel detective agency in Earls Court, London.

My friend, who has fabulous vintage style and can always be relied upon for a good night out, announced that the theme of her birthday celebrations this year would be film noir. Apart from the obvious translation to ‘a black film’, I’m ashamed to say that I knew little else about this, but Google is always on hand to help.

Film noir is a genre, retrospectively assigned by film critics, to Hollywood crime dramas from the early 1940s to the late 1950s.  The Big Sleep, This Gun for Hire, The Maltese Falcon and Double Indemnity are a few of examples of classic film noir.  The films tended to be quite pessimistic as was the general mood in post war America.  They are usually saturated with cynicism as well as using stark light/dark contrasts and dramatic shadowing, as a visual style.

For the occasion, I wore a black pencil dress from Pretty Kitty Fashion with wartime seamed tights and a cream faux fur jacket from New Look.  I set the outfit off with red Sarah Jessica Parker shoes in a classic t-bar style and a black vintage frame, clip top bag which incidentally, was bought for me years back by the birthday girl.  I styled my hair using a Heidi roll tool also from Pretty Kitty Fashion and topped it off with a burgundy pill box hat from Kiss Kiss Heart. 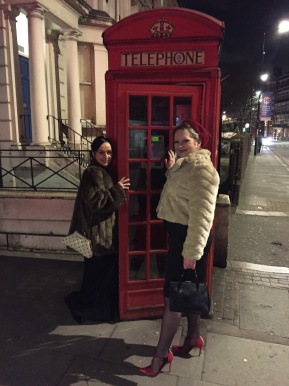 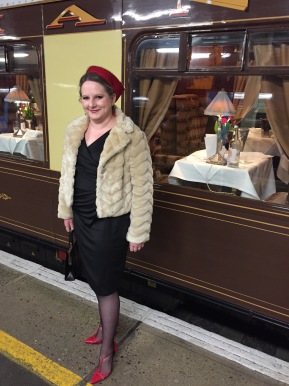 On arrival at the venue, you would never guess in a million years that it was a bar.  You are greeted by a simple door with Evans and Peel detective agency written on it and a buzzer.  After pressing said buzzer, you follow the stairs down to a dark office, where you are asked to state your case.  One of our group stated that their wedding ring had been stolen and they believed the culprit to be someone in our group.  The agency agreed to take the case on, at which point, a bookcase opens to reveal the bar.  Menus in brown case file envelopes are given out which list aptly named prohibition radiator moonshine beer amongst a selection of cocktails and it’s there I’m afraid, that the theme sadly ends.

Not for us however, as our case had been thought up, based on prior knowledge of the evening’s events that were still to come.  Suddenly a member of our group pointed at my friend’s boyfriend and said “it was you who stole the ring!”  To this, the smartly dressed ‘doctor’ dropped to one knee and proposed to my friend who was dressed as the classic Coco Chanel.  Her expression was priceless, she was completely shocked and clearly not expecting it, but very quickly that turned to pure joy as she accepted.

It was a beautiful moment between them that I feel very privileged to have been a part of.  I am so happy for my friend as she so deserves the happiness she has clearly now found.  I await their wedding in June with anticipation – I know it will be another beautifully styled vintage event.

Congratulations guys – who says film noir is dark and pessimistic – it certainly brought you guys great joy and happiness. 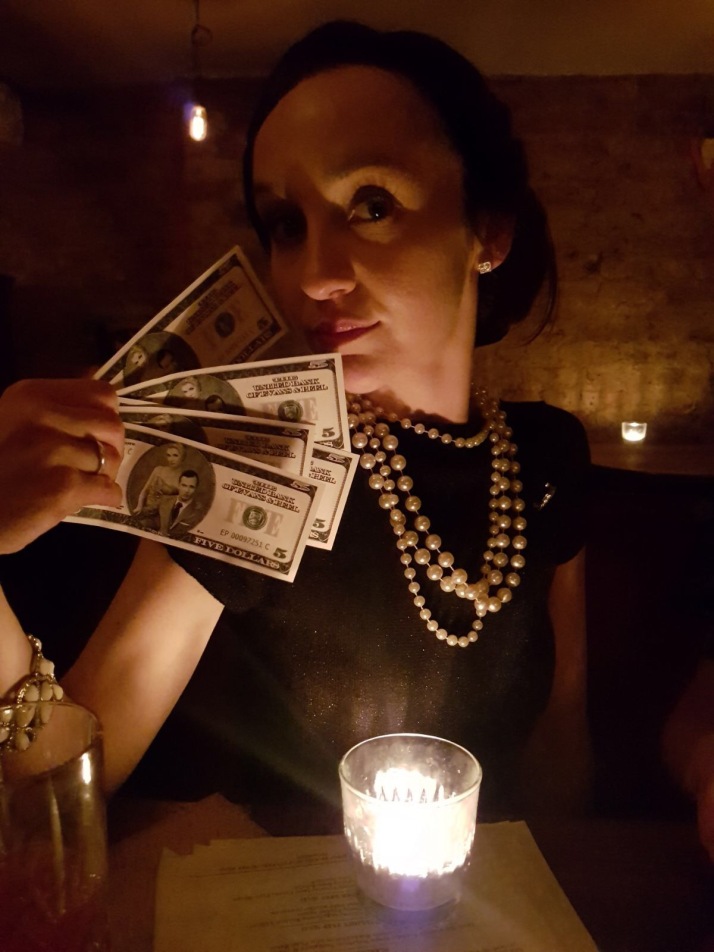