Having been blogging for some time now, I felt it was time I went on a course to refine my self taught skills.   In October, Medway adult education were running a Saturday class in Rochester and so I enrolled.

I was surprised it ran; so often you sign up to classes and there is not enough interest for them to run.  It was however somewhat of a disappointment when I discovered that not only had the teacher not prepared a lesson plan, but everyone in the class; apart from me, had never blogged, but rather just had an interest in starting.

It wasn’t a total waste however, it is always good to meet other writers and I did pick up a few tips.  It also gave me some time to practise writing, when we were all asked to write an introduction to why we blog.

Rochester provided a great back drop for a fashion shoot and my outfit for the day was somewhat geeky in style to fit in with the back to school theme. 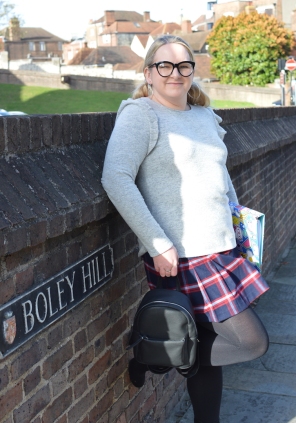 Skirt, jumper and tights are Oasis, boots are Kookai and bag is New Look.  I love a check woollen skirt for winter.  The clear lens glasses set of the geek chic perfectly and were a steal from Asos.  The Hello Kitty folder is from Paperchase, who have a fab range of back to school stationery. 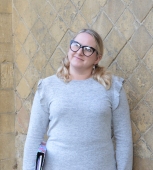 Remember you are never too old to learn and we can learn a lot from each other.  If you get the chance to do some adult education – go for it.  Let me know what you think of my ‘back to school’ look.

That was the question asked to Glamour readers in a competition to take over Dawn O’Porter’s column for a month.  Unfortunately I didn’t win, but thought I would share my column with you, my loyal blog readers.  Hope you enjoy it. 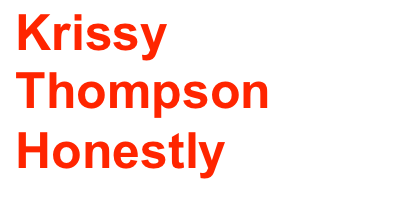 “Before embarking on the journey of life, always read the manual”

Life doesn’t come with a manual and if it did, we probably wouldn’t consult it until all else failed. Through their own experiences, our elders try to guide us, but we have all been young, with the mentality ‘I know best’.

When I was nine years old my uncle wrote in my autograph book ‘love all, trust but few and learn to paddle your own canoe’. At the time I didn’t really understand what it meant, let alone its significance. Now in my 30’s I finally realise just what a good piece of advice this was.

I strive to ‘love all’, putting others first and being thoughtful. A birthday card, a thank you note – little things that don’t cost a lot, but can really brighten someone’s day. There is so much hate in the world today and we could all do our bit and spread a little love. But I often forget to include myself in the ‘love all’. We all make mistakes in life; learn from them and then forgive yourself. Love the body you are in; if you want to make changes in terms of a healthier lifestyle, do, but you should never be made to feel in anyway inferior because your body doesn’t conform to the latest media ideal. Confidence is far more attractive than any body shape.

‘Trust but few’ has often tripped me up. I always see the best in people, assuming they will share the same values as me and unfortunately that means that I’ve been taken advantage of.   At work, a colleague from another location used to regularly pop in for a cuppa and a chat. Unbeknown to me, when I went to put the kettle on, they were helping themselves to my till! I thought the discrepancy was because I was rubbish at my job and it was only when they did it to someone else that the truth came out. That taught me to be careful who I put my trust in; trust needs to be earned.

The final part ‘learn to paddle your own canoe’ I have always found the hardest to follow. I have allowed others to dictate how I feel, when really only you can be responsible for your own happiness. Of course it’s nice to be popular but 1,000 friends on Facebook don’t equal happiness. For the most part they are barely acquaintances! Quality not quantity is what is needed in terms of friendships; otherwise, even with lots of people around you, you can still feel lonely and isolated. I wasted too much of my childhood wishing to be more popular but by the time I got to secondary school, I settled into a nice group and those friends are still my friends today. Never worry what path you should be following in life. I have come to realise that we all do things at different times and you should follow what you feel to be right.

This neatly brings me on to my final point about envy. We have all looked at others and thought ‘I wish that was me’; it’s natural but as my Dad once said ‘be careful what you envy’.

I learned some of these lessons far too late and I hope these small words of supposed wisdom can help you to bring happiness into your own life today; after all as the old saying by Dale Carnegie goes ‘today is the tomorrow I worried about yesterday’.

Coco Chanel once said ‘a woman needs ropes and ropes of pearls’.  Pearls have long been associated with royalty and wealth due to their rarity and difficulty to harvest. Thankfully the advent of the artificial pearl has made it possible for everyone to wear them.

Gone are the days of pearls only being used in jewellery, the Spring/Summer ’17 catwalk was filled with clothes adorned with pearls.  The association with pearls and twinsets is a distant memory with pearls often being added to grungy items such as boots and leather to give a softer, feminine edge.

I couldn’t resist these pearl embellished flip flops from Zara and what better time to wear them than a trip to Buckingham Palace, followed by tea in a Cinderella carriage! 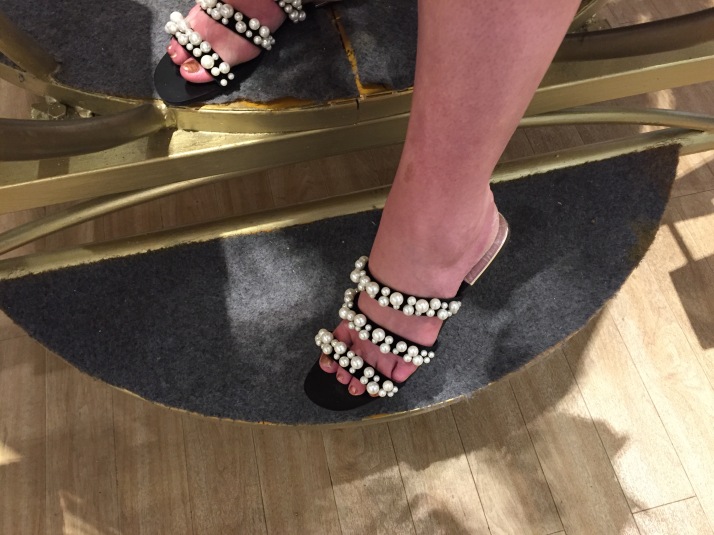 Buckingham Palace was first opened to the public in summer 1993, as a way to raise funds to repair Windsor Castle following the fire the previous year.  Since then, the palace, which is one of the few remaining, working palaces in the world, has welcomed over six million visitors.

The changing of the guard was in progress when we arrived, with the Old Guard leaving Buckingham Palace for Wellington Barracks accompanied by the band.  I immediately felt very proud of our country’s heritage.  We had chosen the State Rooms ticket, which includes the 19 rooms used for official engagements.  I particularly enjoyed seeing the Throne room and the Ballroom.  We entered through the porte-cochere or covered carriage entrance and admired one of the royal carriages. The Grand Hall leads to the magnificent staircase that is a masterpiece in gold.  Displayed on the staircase are various portraits of Queen Victoria’s family.  Each of the State rooms has various items from the Royal Collection, given to the Queen from countries around the world.  There was a special display for Princess Diana, curated by her sons, as a tribute,  being that 2017 is 20 years since her death.  Princess Diana was a great lover of pearls, mainly due to their versatility.  She made pearls appealing to a younger generation during the eighties.

I was a little disappointed that the view of the gardens was literally a quick glimpse on the way out and you have to buy an additional ticket to see more.

After the palace we made our way to Hyde Park and enjoyed lunch overlooking the Serpentine followed by a walk around Diana’s memorial fountain.

The last activity of the day was by far the best and that was afternoon tea at the Tea Terrace at House of Fraser Victoria.  A friend had shared with me on Facebook the fact that they had a golden Cinderella carriage there that you could book to have tea in.  This was right up my street given the carriage I chose for our wedding and my love of all things princess – fairy-tales do come true after all!

There is a usage fee and you can only occupy the carriage for one and a quarter hours, or it turns into a pumpkin, but what an amazing experience for all us girly girls.  The Tea Terrace is designed to give a traditional afternoon tea experience, painted in baby pink and blue with inspirational quotes on the walls.  There is a self playing piano to provide atmospheric music and the crockery is all Royal Albert fine bone china.  We indulged in the Celebration Afternoon tea that was served with prosecco.  There was a choice on sandwich fillings, which is often not the case with afternoon tea packages and beautiful warm fruit and plain scones served with the traditional jam and clotted cream.  A selection of cakes was also included although these were a little disappointing given that they were banana cake and lemon cake which are two cakes I am not keen on.  It felt amazing to sit in the carriage while enjoying this lovely British classic.  As Henry James said ‘there are few hours in life more agreeable than the hour dedicated to the ceremony known as afternoon tea’. 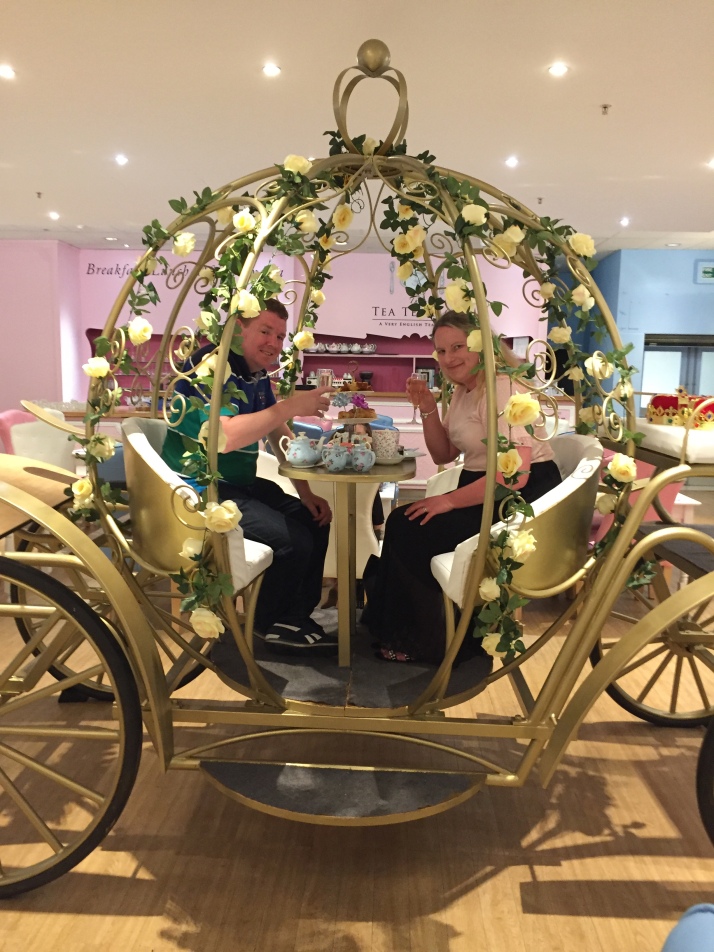 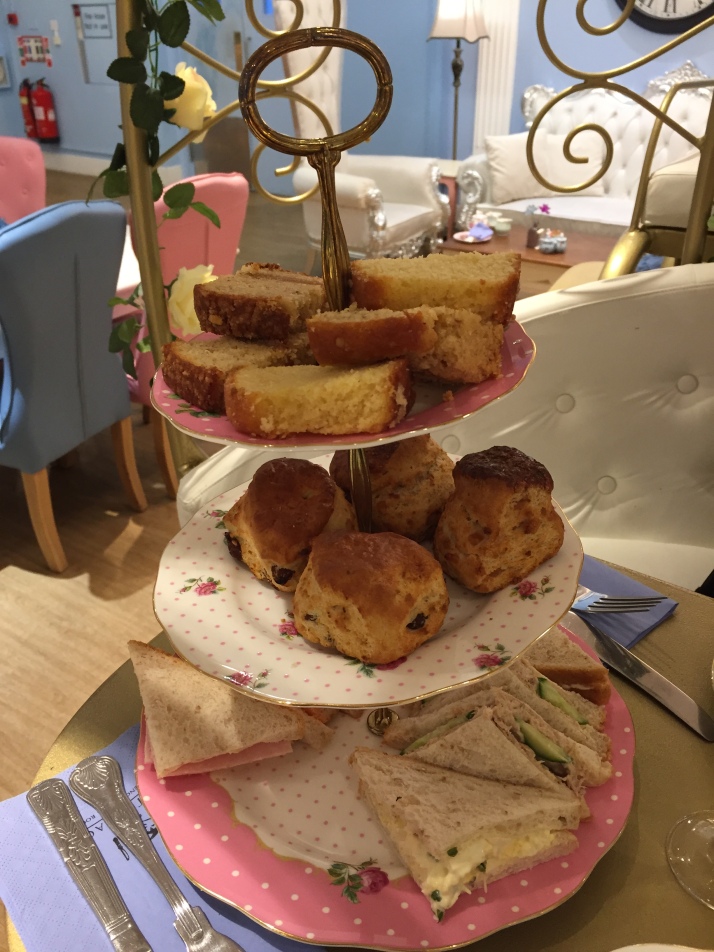 The pearl trend is going nowhere, with autumn/winter catwalks again filled with them. These pearl embellished jeans from Zara were a fabulous purchase. 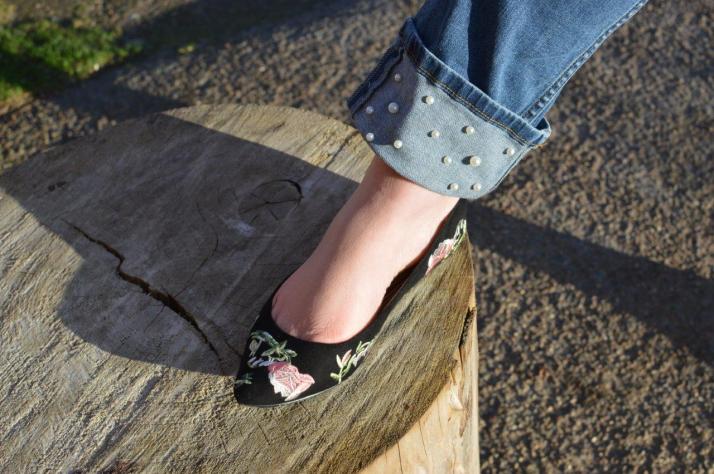 Why not share with me how you are rocking the pearl trend? I’d love to hear from you!