Life is full of contrasts and contradictions which is what makes it interesting.  As summer becomes a distant memory – grey has become en vogue.  By that I am not simply referring to the sky but the latest cult trilogy which has overshadowed Twilight – that is ‘50 Shades’.  Everywhere women are discussing it.  I have now finally read the first book, mainly to see what all the fuss has been about.  How can I sum it up?  Christian grey is a man of contradictions which is interesting as grey tends to be used to imply uncertainty or a mixture of good and bad.  Grey often symbolises boredom but paradoxically the book is very colourful despite the use of grey in the title.

On the subject of grey skies, this month saw the 25th anniversary of the hurricane in the UK or the great storm as many refer to it; when Michael Fish became a household name saying ‘there will not be a hurricane’.  Is anyone else finding it impossible to get up in the mornings now that it is dark and often drizzly?  Well the clocks went back this weekend so it should be a bit lighter in the mornings for a few weeks.

Before you all slip in to a grey depression, every cloud has a silver lining and there are some beautiful leaf colours at this time of year making a truly beautiful landscape, almost like a watercolour. 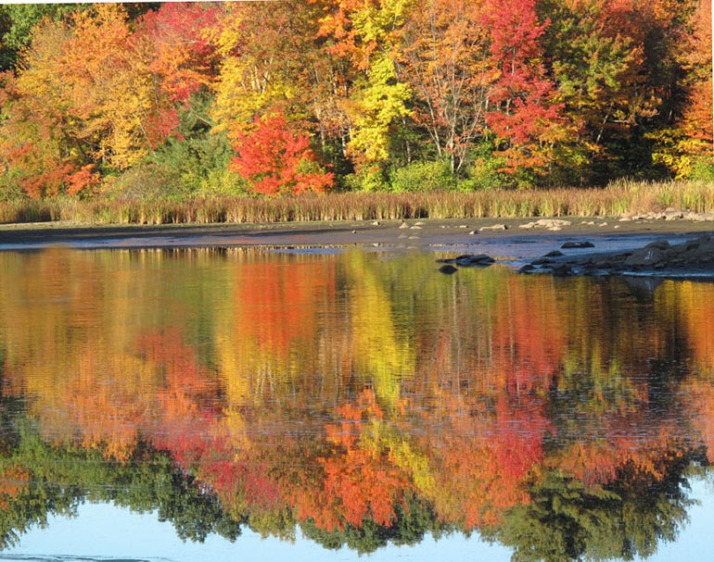 Fashion has certainly taken somewhat of a lead from nature.  Coloured denim is as big as it was in the summer but we move away from brights and pastels to more muted darks such as these burgundy jeans which I couldn’t resist from New Look.

Another transient trend has been birds but more specifically this season owls.  This top was a bargain purchase again from New Look.  I teamed it with a grey Oasis boucle mini and a light grey cardigan but it will look equally good with my burgundy jeans and my leather biker with knitted sleeves to give more of an edgy rock look. 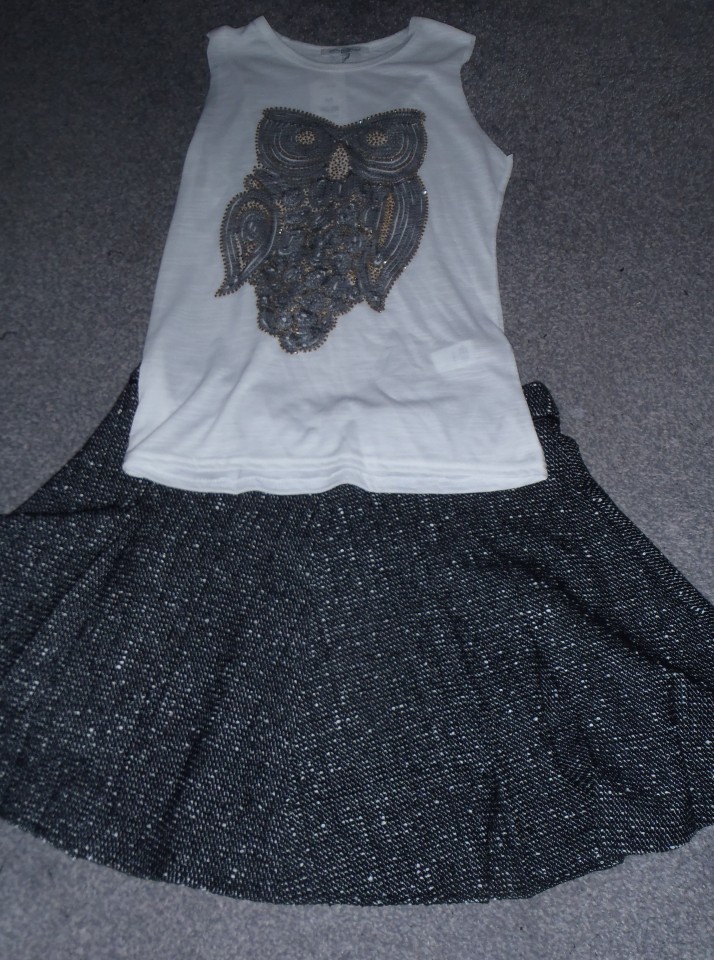 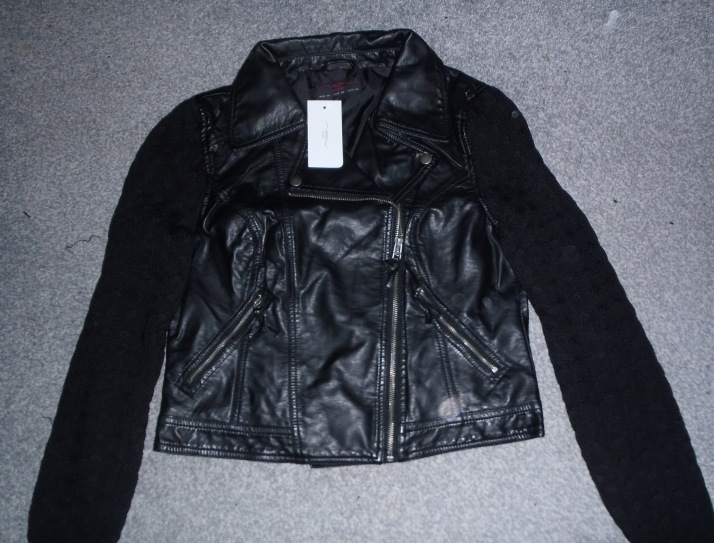 Nails have also gone back to nature with nude colours.  I love a Rimmel brown called ‘Beige Babe’.  Whilst on the subject of nails – Nails Inc have produced a couture range where you are able to design the bottle and personalise it and the box – what a great idea for Christmas presents and naturally I thought I would treat myself to one first.  Meet my new shade ‘cosmopolitan’.

I find the biggest fashion challenge of autumn/winter is finding the perfect pair of boots rather than the perfect coat as many fashion writers suggest.  I may well follow their suggestion however that the solution is not to try and nail it down to one but have a variety.  My favourite boots have seen better days; they were a cheap faux suede, black knee high pair from Primark.  I treated myself to these biker style boots but foresee myself also getting a pair of Uggs and some dainty high heeled ones too! 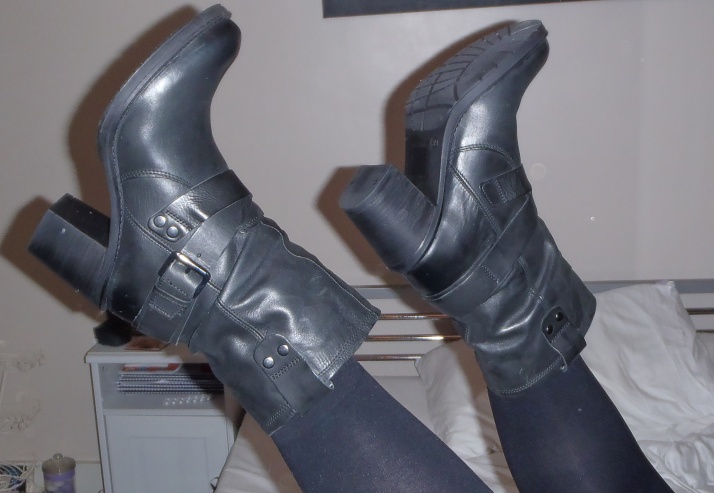 A few weeks back I went to Cheryl’s million lights tour at the O2 which was fantastic and I eagerly await the Girl’s Aloud reunion next year.  I have a very varied taste in music from Led Zeppelin and Stereophonics to current pop – another ambiguity.

Last weekend I surprised my other half for his birthday with a long weekend in Berlin.  Berlin is steeped in history – unfortunately most of it dark with WWII and the Berlin Wall.  They have acknowledged this past however as something to learn from and around it developed a modern, buzzing, cosmopolitan city especially at Potsdamer Platz which was the centre for the Festival of Light which took place whilst we were there.  Art and advertising was projected onto buildings and coloured lights are placed beneath the trees which create a magical feel. 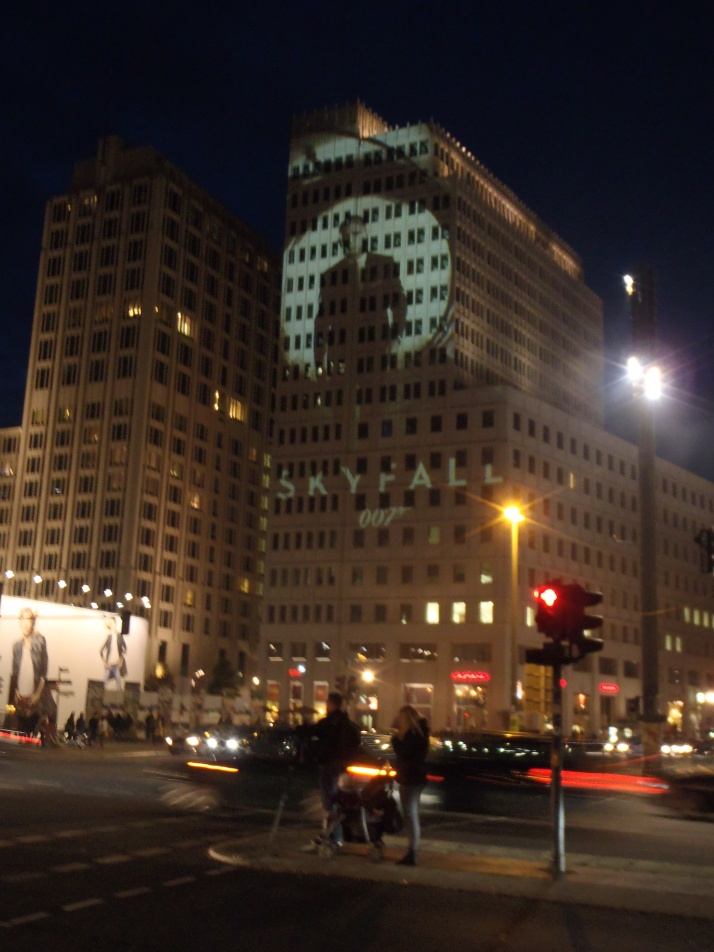 The most poignant place we visited for me was Gleis 17 at Grunewald station.  This is a disused platform nowadays but it was once where many Jews boarded trains to concentration camps during the war.  It is now a memorial to them.  Along the platform edge are the number of Jews deported each day and it really is horrifying.  1000 to Auschwitz, 1700 to Theresienstadt…..  Now it is peaceful and serene with only the sound of the wind in the trees to interrupt your thoughts and prayers. 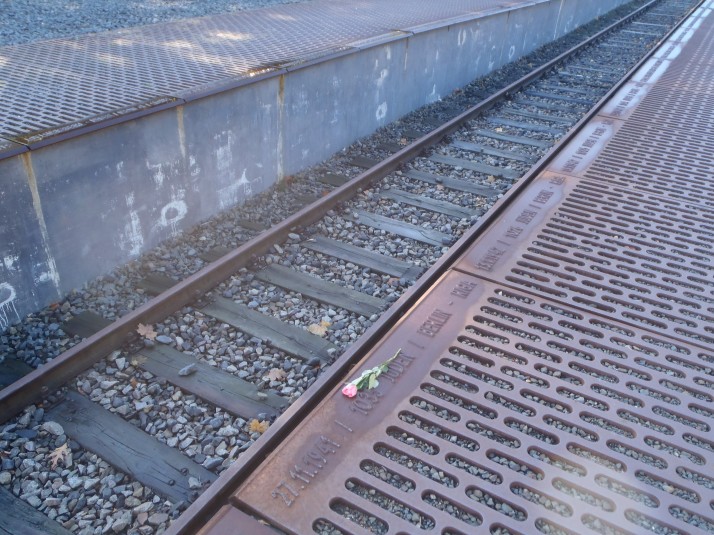 Other sites we saw were the Topography of Terror which is the sight of the Gestapo and SS headquarters but is now a records centre for the atrocities and takes you through how Hitler got his hold on the German people.  Something I didn’t know however was that concentration camps existed long before the outbreak of the war as early as 1933, where people who opposed the Nazi political party were sent.  We also visited the site of Hitler’s bunker which now has flats built on it – not sure I would want to occupy one of those flats!!

In some ways the wall and its history had more of an impact on me because it was in my lifetime and therefore easier to identify with.  I knew very little of the history before the trip.  The wall was erected in 1961 by the GDR to separate East Berlin and the rest of East Germany from West Berlin as it was believed that the West had not been fully de-Nazified.  Families were separated and in the East there were strict communism rules imposed by the Soviets including censorship of media materials.  The West was being built up and saw great economic growth whilst the East lagged behind.  Many East German people tried to escape to West Germany (estimates suggest 3.5 million) either through border houses, over the wall or by tunnelling and many were killed.  There is a photo memorial to them by the strip in Bernauerstrasse and a further memorial by the Reichstag. On 9th November 1989 the GDR announced the border reopened and in 1990 the physical wall was removed.  There are two long stretches of the wall left, the first at Bernauerstrasse where they have also uncovered the foundations of the border houses and one by the topography of terrors on Niederkirchnerstrasse.  It is unbelievable that this occurred in recent history.  When the wall came down in 1990, many gathered at the Brandenburg gate.  This iconic structure was also lit up as part of the Festival of Light. 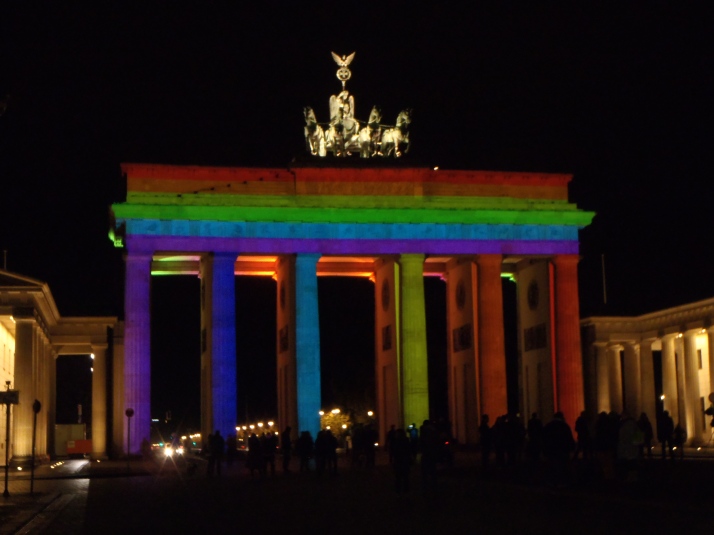 One of Berlin’s more modern structures is the Fernsehturm or TV tower, built between 1965 and 1969 and the countries tallest building at 368 metres.  The lift reached the top in 40 seconds, making my ears pop.  At the top we were treated to 360 degree views of Berlin.  I enjoyed a cocktail appropriately named 360º whilst we were up there. 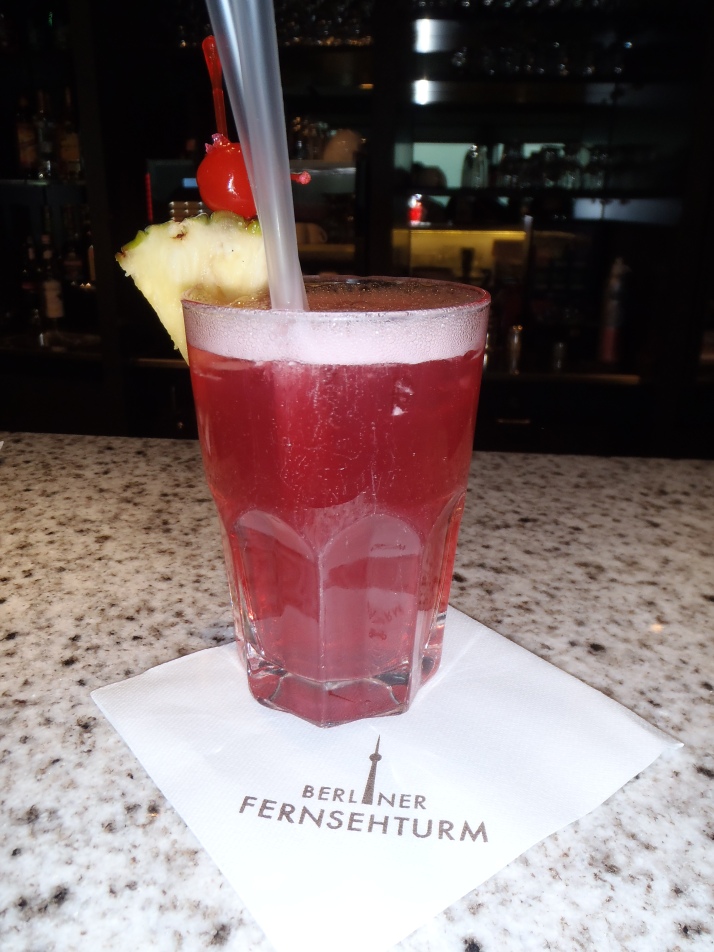 The weekend we went happened to also be Oktoberfest and at Alexanderplatz there was a traditional German market and plenty of beer on offer.  We warmed ourselves with a Jagermeister shot too.  I’m not normally a beer drinker but I must confess I quite enjoyed a Berliner and the Rothaus brewery beer Tannenzäpfle or Fir Cone (a beer from the Black Forest). 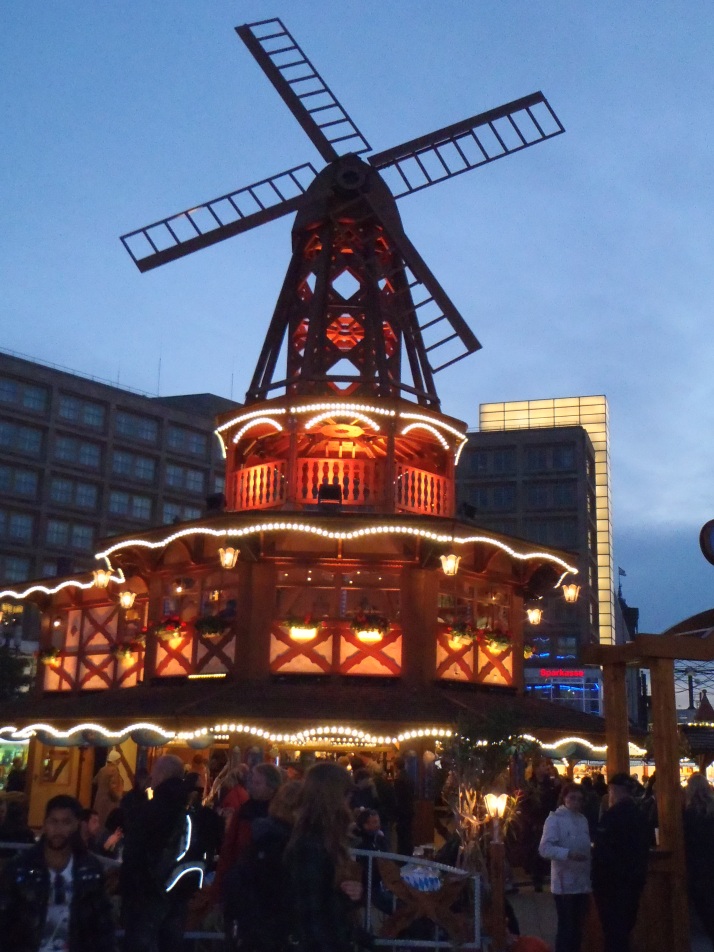 Berlin had so much to offer, we could have done with a bit longer there but we crammed in the highlights and on the last day, as a bit of light relief from all the history, we visited Berlin Zoo.  This has the largest collection of animals due to the fact that when the city was divided, there were two zoos and they have now been combined into the one.  I can honestly say it is the best zoo I have ever visited because they have really given thought to the layout with low bars so you can get excellent photos.  Of course the elephants were the highlight for me! 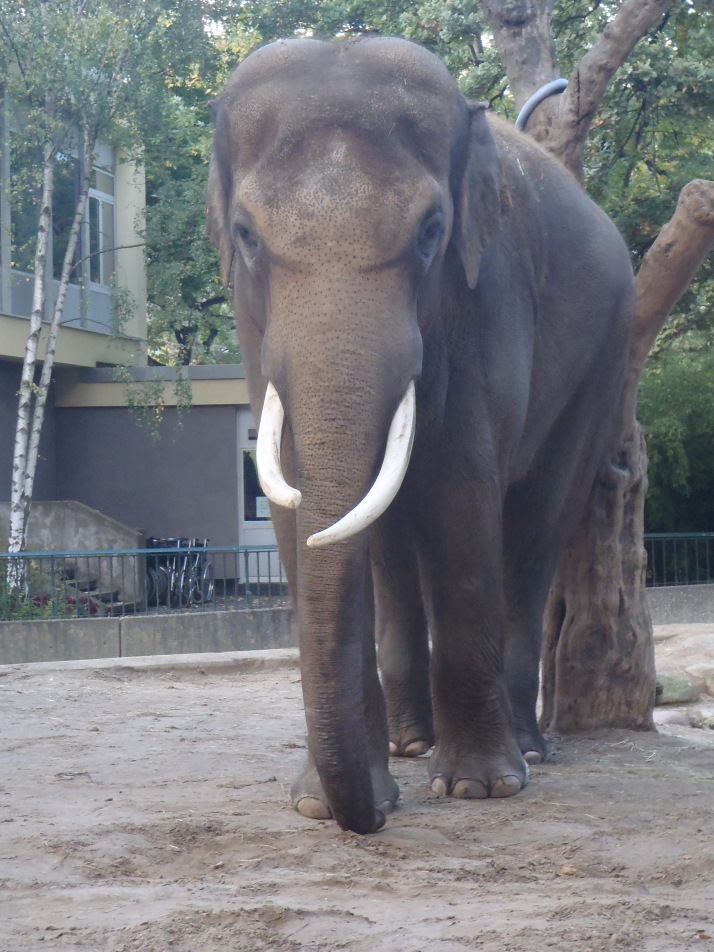 On the way home, the sky looked beautiful as we approached Schőnefeld airport, with the sun just coming up.  At the airport my partner treated me to some perfume as a thank you – Daisy eau so fresh by Marc Jacobs.

With X Factor live shows now well under way – the countdown to Christmas has truly begun – only 57 days until Christmas day!  Before that though we have Halloween approaching and make sure you visit the cinema to see the new Bond film – Skyfall, released this week – we went today and I must admit I have never been a great Bond fan but I thoroughly enjoyed it and now want to see all of them and   Adele has smashed the theme tune.  Can’t believe this film marks 50 years of Bond and it’s still as popular today as when the first film was released.

Have any of you got memories of Berlin you would like to share?  What are you doing to cheer yourself up on these grey days?