February, along with September is always a highlight in any fashionista’s calendar as it is London Fashion Week.  I attended the 18th London Fashion Weekend, organised by the British Fashion Council, as I have done in previous years.  It is an opportunity for anyone to get a sneak insider preview of the season’s trends as well as giving access to designer brands at discount prices.  This time it was held for the second time at its new home, the Saatchi Gallery and this was my first time at this new venue.  The Saatchi Gallery has moved location numerous times but its current location is in the 1801 Duke of York HQ which is a beautiful pillared building, just off of the Kings Road. The Kings Road has always been renowned as one of the great shopping streets of London, so is a fitting location, with more than enough glamour to complement the fashion event.

For this occasion I decided to embrace the current 90’s trend of cropped tops and wore skinny jeans, with a black vest top and a cropped sweatshirt bearing the name of fashion’s bible – Vogue.  To learn more about Vogue check out my last blog  I accessorised with a small backpack (another 90’s throwback) and my Kookai suede boots.  My hair was done in 2 French plaits.  My new favourite leather look biker jacket, kept the winter chills out.  On a previous occasion I wore another cropped sweatshirt, this time grey with a Mickey Mouse logo and again following the seasons braid trend, this time with a small french plait at the front of my head.

Fashion week has been at the forefront of the media recently with the suggestion that rather than show autumn/winter in February and spring/summer in September, this would be swapped so the items seen on the catwalk appeared in the shops before the hype from fashion week is a distant memory.  They also want the shows to be less about the media and buyers and more about consumers.

Upon arrival, with our silver tickets, we received a Preen by Thornton Bregazzi tote bag filled with goodies.  The designer couple, met as students on the Isle of Man and began with a shop in Portobello road sharing their love of Victoriana. Twenty years on they are now a global brand with a signature look of combining femininity and masculinity in their designs.  The bag was a pretty floral design mixed with a geometric pattern.  My favourite goodies inside were the Garnier Moisture Bomb and Maybelline lip balm.

My friend and I opted to view the trend show rather than that catwalk show in the hope that we would get more achievable ideas for our everyday looks for the upcoming spring/summer season.  I treated us to front row seats too.

It was disappointing that the models stopped just short of us so when they posed we could generally only see their backs.  Another disappointment of the day was the quality of the refreshments. There was a small coffee bar that only took cash and a champagne bar which had all the ambiance of a cardboard box.  They did however provide us with wrist bands so we could go outside for sustenance.

The trend show was presented by Laura Jackson (you may remember she had a collection at Oasis last autumn) and was styled by VeryExclusive.co.uk.  The hair was done by Toni and Guy and the make up by Maybelline.  The four trends showcased were Beautiful Botanicals, Americana, Pop Art Brights and New Romance. 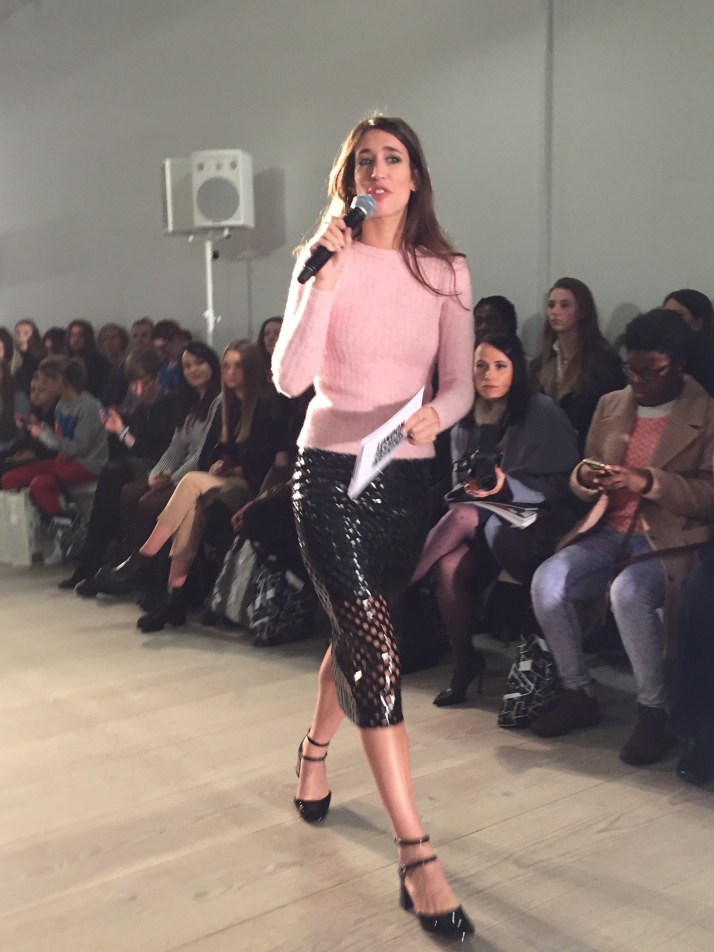 Beautiful Botanicals promoted the floral motif which I love because it is so feminine and evokes the feeling of a beautiful British summers day.  This particular dress is Paul by Paul Smith. 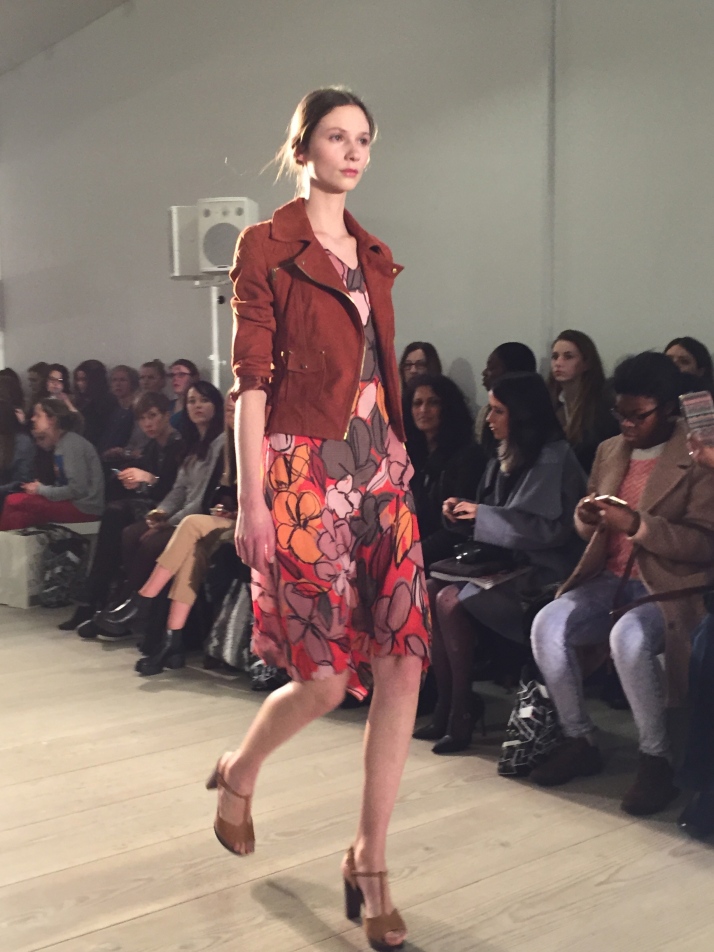 Next up was Americana, drawing on the components of the American flag – stars, stripes and red, white and blue.  I loved this military style jacket as well as this denim jacket which were both Marc by Marc Jacobs.

Pop up Brights as its name suggests injected a lot of colour onto the catwalk.  Make a statement with accessories in clashing pantones with your outfit.  I loved these two dresses; the striped one by Karen Millen and the other Love Moschino. 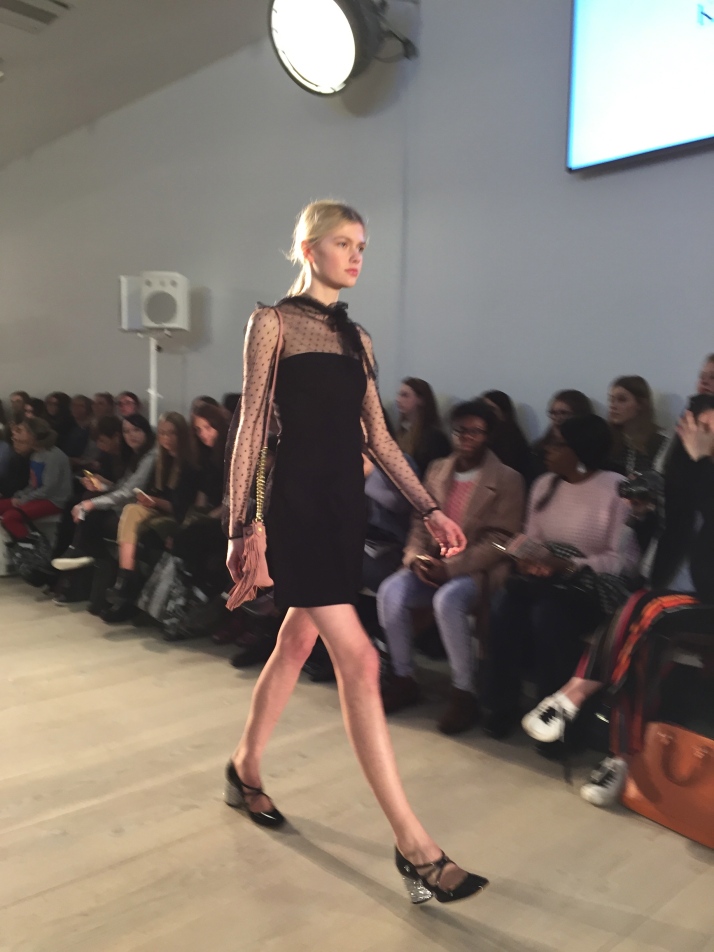 Both my friend and I fell in love with the Marc by Marc Jacobs shoes with glitter heels seen on the models in the final trend. Unfortunately they would blow the budget but online I managed to find a similar style by Miss KG, only nude instead of black, which were a fraction of the cost so of course I had to buy them for my ever expanding collection. 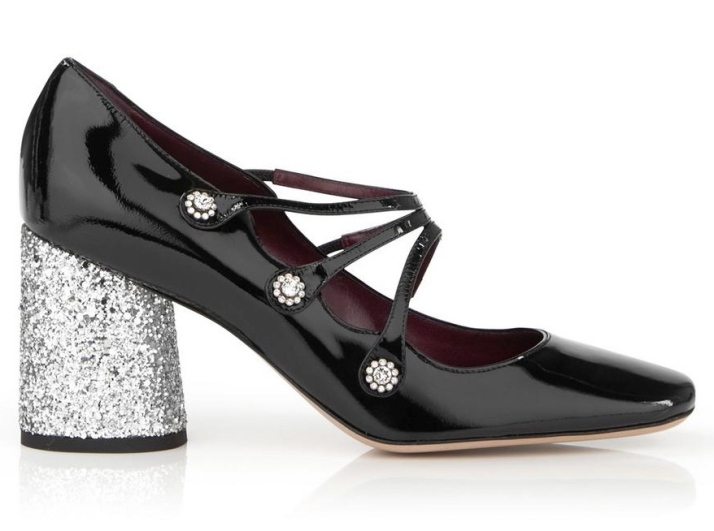 Afterwards, my friend and I browsed all the designer pop ups including Miss Patina loved by Taylor Swift, Ukulele and Bad Denim amongst many others.  I couldn’t resist a nautical striped dress by Winser that was reduced from £79 to £39!  I was pleased to see that they had a shoe gallery this year and especially liked shoes at House of Spring and Alexander White but was for once restrained on purchases!

When we had literally shopped ‘til we dropped we headed to a pub on the Kings Road for a good old catch up over several glasses of wine.