Mary Quant once said “Risk it, go for it.  Life always gives you another chance, another go at it.  It’s very important to take enormous risks.”  That’s exactly what she did in the Swinging Sixties, redefining what it meant to be young and seizing every opportunity that came her way.

The Fashion and Textile Museum’s latest exhibition; ‘Swinging London: A Lifestyle Revolution’ explores the design and the fashion of the Chelsea Set, in particular Mary Quant and Terence Conran, but touching on the work of other designers of the era, who worked with them such as Laura Ashley and photographers of the time.

I visited with my Mum, who grew up during the wonderful Sixties in London.  I often think it must have been a fabulous era to be a teenager in.  Taking Mary’s philosophy of risk, I chose a different outfit to something I would normally wear which also gave a nod to the Sixties/Seventies, along with embracing the current trend of co-ordinates.  The skirt and top were from River Island, the beige mac was M&S (I was channelling my inner Mod here) as well as the orange espadrilles.  The bag I styled it with was also River Island – a great copy of the Dior saddle bag.  I tied in the orange shoes by also wearing orange hoop earrings from Accessorize.  Unfortunately, the risk didn’t really pay off as the outfit was not a great choice for my fuller figure.  Fashion is about having fun and Quant certainly promoted fashion as a game, but we have all had our fashion fails.  Why not share some of yours below? 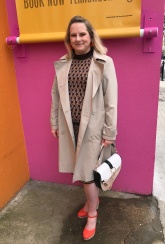 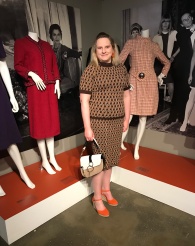 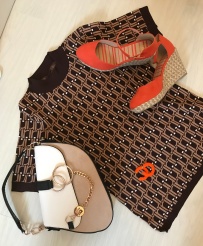 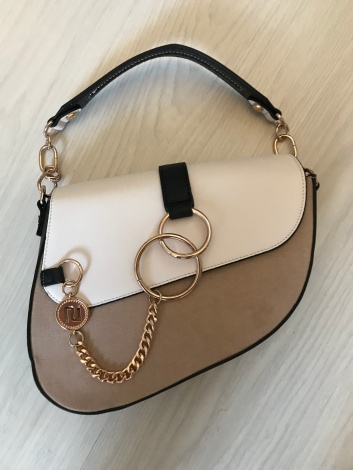 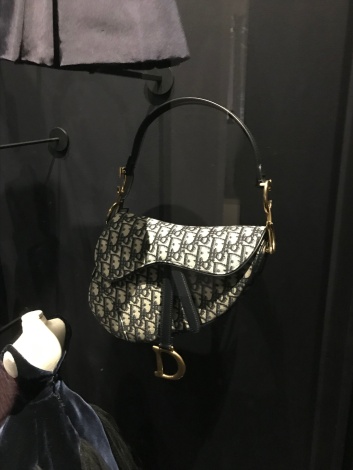 While a relatively small exhibition, Swinging London gives a great overview of fashion from 1952-1977, displaying homewares, fashion, furniture, lighting and ceramics and is very reasonably priced to visit at less than £10 per ticket.  Visit before the exhibition closes on 2 June 2019. 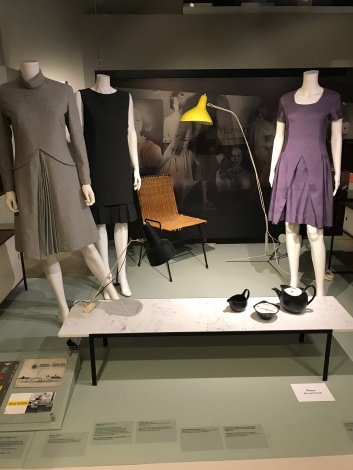 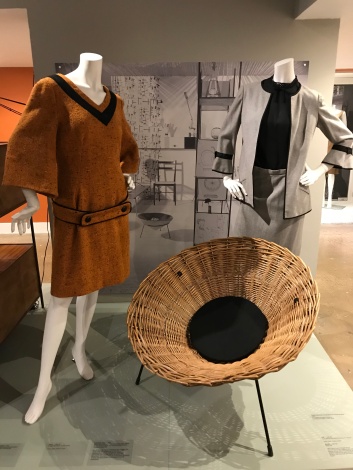 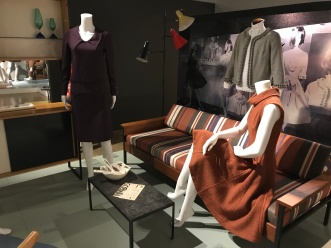 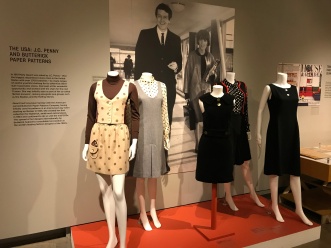 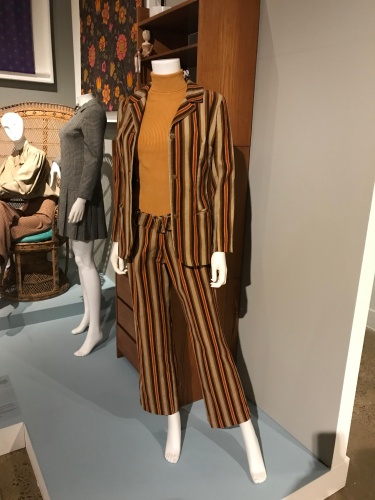 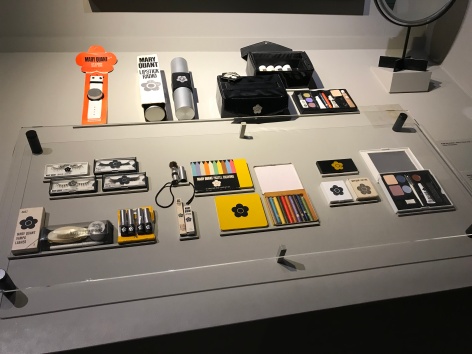 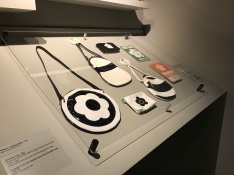 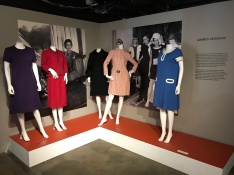 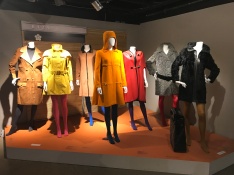 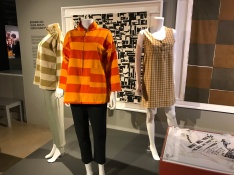 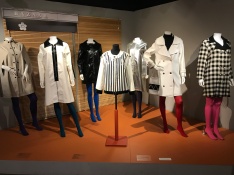 Mary Quant was born in Blackheath, London in 1930 and was instrumental in the Mod and youth fashion in the sixties, along with being one of the designers accredited with the mini skirt and hot pants.  She opened her first shop, Bazaar in Chelsea in 1955 and two years later a second branch, in Knightsbridge, designed by Terence Conran. 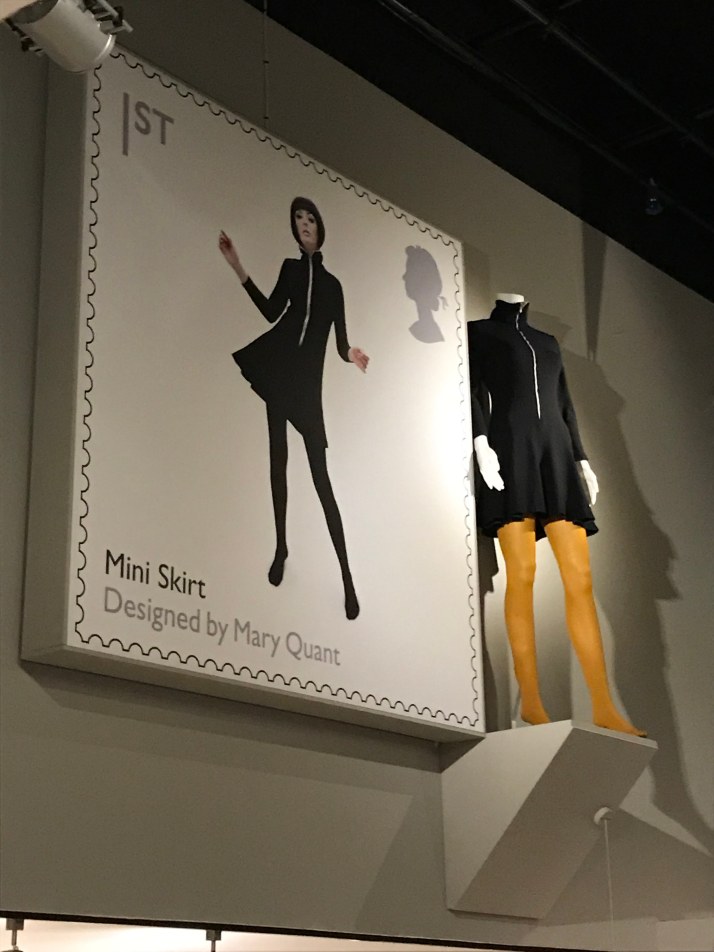 Terence Conran was born in Kingston Upon Thames, London in 1931and started his own design company in 1956, designing a shop for Mary Quant.  He is most famous for the household and furniture store, Habitat, opening the first branch in Chelsea, London in 1964.  Involved in other retail businesses, along with architecture and interior design; more recently he is known for a number of London restaurants which he has created. 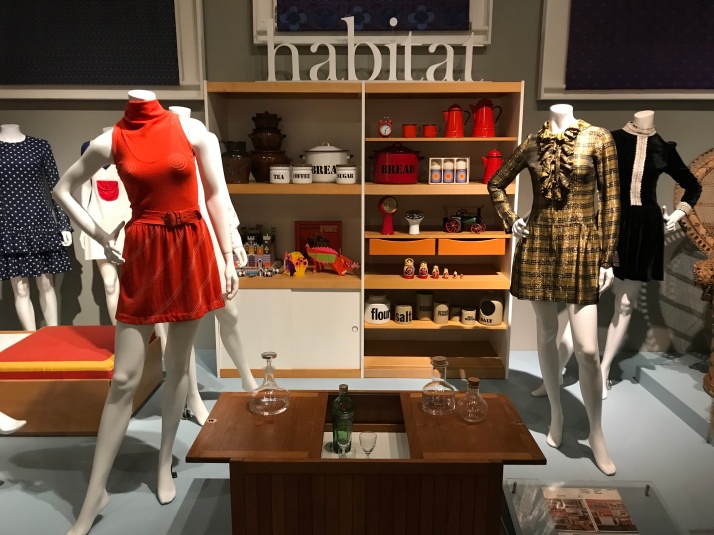 The below photo shows the co-ord set designed by Quant in 1965.  The design of the fabric was a textile from Liberty of London, originally an early twentieth-century block-printed fabric, which Liberty converted to a screen-print.  The ‘Sgt Pepper’ coat is by Michael Mott for Paraphernalia, a leading boutique in New York who acknowledged the influence of Mary Quant and her boutique. 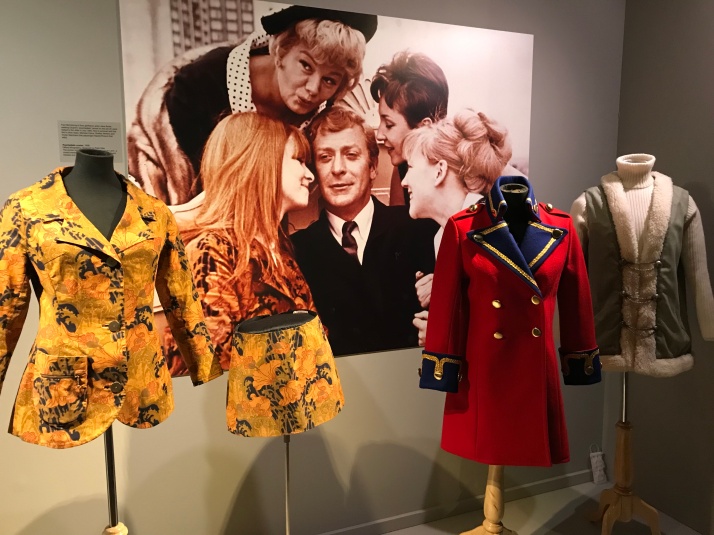 The shoes below, came with a carry bag and are from a 1967 range by Quant when she collaborated with G.B. Britton – a work boot manufacturer.  They proved to be unpopular, given that like wellies, they were too hot and sweaty in summer and too cold in winter. 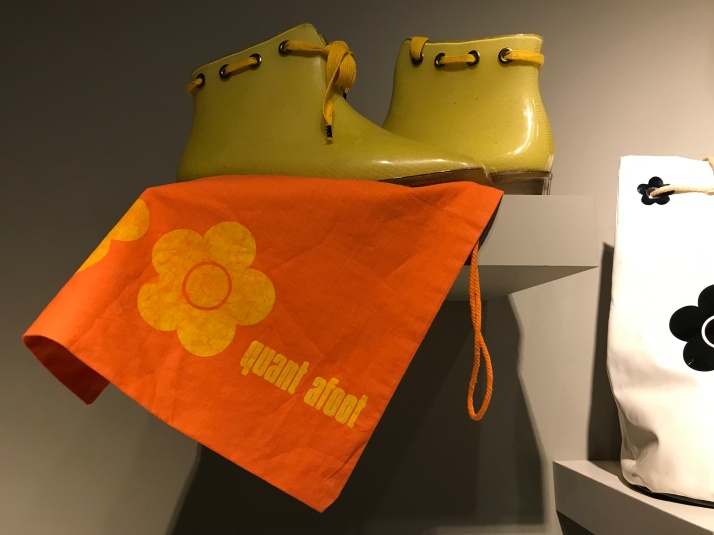 Part of the exhibition was Elizabeth Suter’s sketches which captured the designs from the sixties catwalks.  What makes these sketches all the more brilliant is that they were drawn mainly from memory, as sketching during the shows was not allowed.  These were captivating and showcased such a wonderful talent.  I would love to have some of these framed on my walls at home. 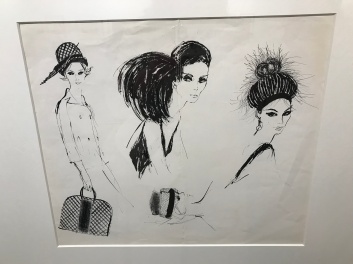 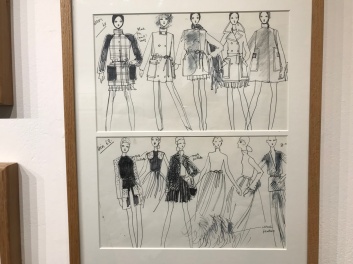 Following the exhibition, Mum and I explored some previously unvisited corners of Bermondsey and discovered a lovely parade of cafes and shops which included Kat Maconie the shoe designer and London Glassblowers where they display glassblowing as well as selling signed decorative pieces by Peter Layton.  We went on to discover Vinegar Yard, an urban garden and street food market that has pop up shops selling vintage clothing, antiques, records and art, amongst other things.  Vinegar Yard only opened in April this year and you can’t miss it, due to its art installation of a train carriage with giant ants crawling over it.  Artist Joe Rush created the ants and has a working studio within the yard.  Just round the back of London Bridge station, this is a classic example of what I love best about our Capital, there is always something new to discover around the corner! 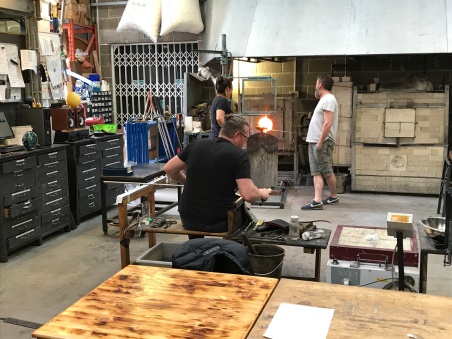 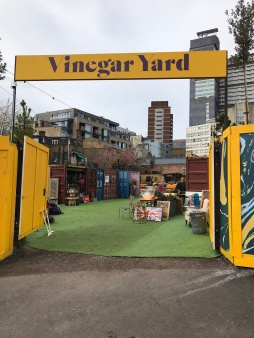 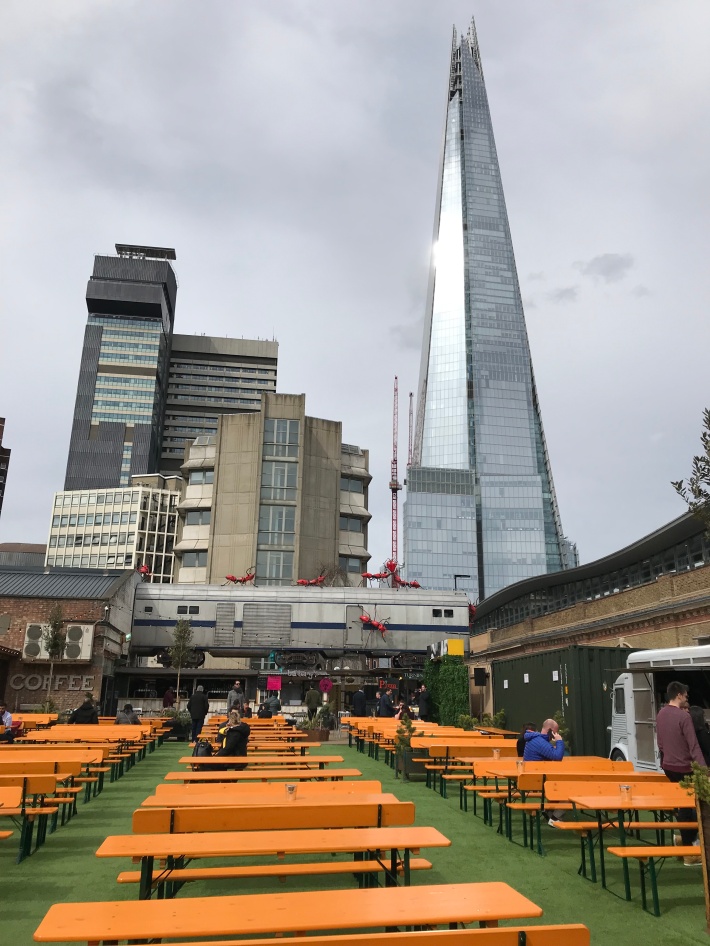 We finished the day in the vibrant Borough Market with lunch at Fish! which served delicious fish and chips in the heart of the market. 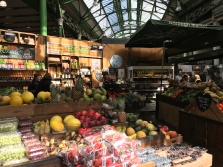 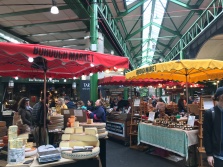 We had a lovely day out, proving that South London has just as much to offer as the more central and traditionally tourist parts; after all Mary Quant herself was a South London girl!

Why not take a leaf out of Quant’s book and take a risk, after all when you die you always regret the things you didn’t do.