On American Independence day, I visited the Victoria and Albert Museum in London with my friend to see the Shoes: Pleasure and Pain exhibition. I had been looking forward to this for weeks as it is certainly an exhibition made for me; my idea of heaven.

I’m sure women everywhere can identify with the fine line between pleasure and pain that shoes often occupy. How many times have we worn a fab pair of heels dancing and ended up crippled by the end of the night and sometimes even walked home in bare feet? So why do we do it? Shoes have the power to make us feel differently about ourselves, that’s why.

Status is often implied by the shoes we wear – when we see a flash of a red soled Louboutin – we know the person has not only class but money. History also supports shoes as symbols of status with royalty wearing heels to tower above their subjects and geisha shoes with their huge platforms that elevate the geisha to quite a height so that they were in the eye line of men and above other women.  Talking of platform shoes, on display at the exhibition were the famous Vivienne Westwood blue mock-croc platforms which Naomi Campbell fell over on the catwalk in during a Paris fashion show in 1993.

Heels make us walk differently – they thrust our hips forward and elongate our legs which is seen as attractive to men, hence shoes often being seen as fetish objects.

An entire outfit can be changed by the choice of shoes – how many times have we borrowed a pair of heels in a dress shop in order to get a true impression of the dress?

Personally I feel that heels make my silhouette appear to be thinner and therefore I feel more self-confident. There is the added bonus that once we reach adulthood our feet don’t change size so they always fit however many chocolates you have eaten! I have often been shopping and resolved to buy nothing, having had my self-confidence shattered by the mirrors in the changing rooms to only then purchase a pair of shoes to cheer myself up.

I felt as though I should wear some nice shoes for the exhibition, which gave me an excuse to purchase a new pair! (Not that I need an excuse). I had read an interview in Look magazine with Kat Maconie, a British shoe designer who launched in 2009, and I was inspired to check out her collection. I purchased these stylish black sandals with chain ankle strap and the must have block heel. I wore them with an embroidered playsuit from Boohoo. I must admit I am a convert to the playsuit trend since purchasing this one. In the past I have found them not to suit my build particularly well but thought I would try again since stars such as Ella Henderson look fab in them without being stick thin. I am so pleased I did as this black one complements my curves and the embroidery is so pretty and unusual. I used my red quilted bag from Fashion Union to complement the red embroidery. 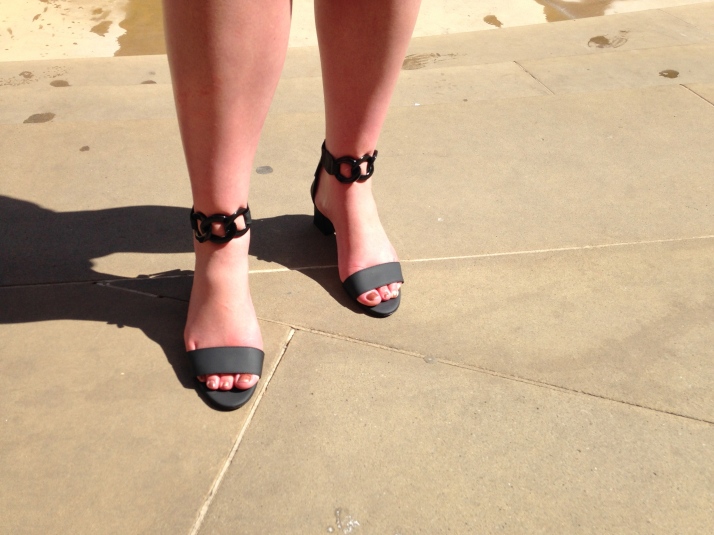 The exhibition contains around 250 pairs of shoes and looks at the history of shoes, the basics of making them, the fairy-tale quality of shoes, shoes as tools of seduction as well as our obsession with them and contains a sample of some shoe collectors hoards, as well as many shoes from the museums archives.   There is a pair of Imelda Marcos’s shoes – she infamously had a collection of some three thousand pairs. It has been suggested that her obsession may have been born out of the denial of shoes when she lived in a garage with her ailing mother as a child.   Interestingly the collections were not all of designer shoes and one in particular contained lots of high street labels.

There was a video running shots of shoes from movies and my favourite scene of Big proposing to Carrie with the blue Manolo’s I wore for my wedding was amongst them, although I was disappointed that the shoe itself was not part of the exhibition   There were however a few pairs of Manolo’s there and also a Jimmy Choo shoe which Carrie wore in an episode of Sex and the City. There was also a pair of white stilettos worn by Marilyn Monroe. 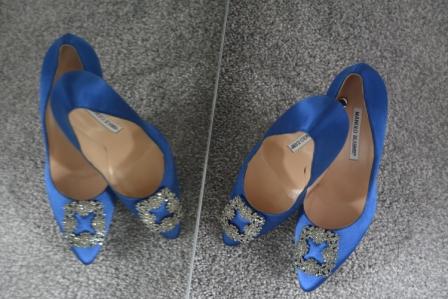 There is no doubt that shoes have power over our emotions but in fairy tales their magical qualities have been explored. At the exhibition were the red ballet shoe worn in the film, The Red Shoes, released in 1948. In this film a young ballerina joins an established ballet company and is chosen for the lead role in the ballet called The Red Shoes which is based on the Hans Christian Anderson fairy tale first published in 1845 about the red ballet shoes that danced by themselves. In the film the girl is torn between her love of ballet and her romantic love, which when she chooses the man, she dies wearing the red shoes.

Red ballet shoes made for Victoria Page (Moira Shearer) in The Red Shoes (1948), silk satin, braid and leather, England 1948 Freed of London (founded in 1929), Photograph reproduced with the kind permission of Northampton Museums and Art Gallery

I thought I knew all there was to know about shoes but I did learn something; the height of Louboutin shoes varies according to the size of the shoe. This keeps the silhouette of the shoe the same and avoids some unwearable angles.

Anyway, enough from me, who better to tell you about the exhibition than the curator herself, Helen who I was lucky enough to be able to put my questions to.

What inspired you to do this particular exhibition?

The idea of this exhibition came about 5 years ago when I came across drawers in one of the V&A stores filled with heavily embroidered Indian shoes with long curly toes made out of rich and colourful materials, embroidery with iridescent green beetle wings, silk, spangles and gold. These were unpractical, beautiful shoes for the Indian elite. I then realised that this was, and is, happening in many other cultures and historical periods such as ancient Egypt China, Renaissance Italy, Manchu China etc… and of course nowadays.

How many pairs of shoes were originally identified to be included and how did you narrow it down?

From the start of this project we always knew we would have around 250 pairs of shoes in the exhibition but choosing the final selection of around 250 pairs of shoes has been one of the most challenging aspects of my job. The V&A holds an extensive footwear collection, both Western and Asian, encompassing over 2000 pairs spanning 3000 years of history. I have also explored several private and public collections worldwide. Choosing the right pair of shoes has not always been easy. I wanted thought to convey a specific message and tell a story, I have consequently chosen shoes that could help me follow the narrative. I also chose pairs and shoes that were beautiful, sculptural and in a good conservative condition.

How long did the exhibition take to pull together?

Do the curators have a favourite shoe?

The favourite shoe changes from day to day – but to be able to include the Cinderella slipper from Kenneth Branagh’s Cinderella movie was quite spectacular!

What’s the most outrageous shoe on display?

Perhaps the shoes for bound feet from China, as people find this practice particularly gruesome and painful. But the history of foot-binding is incredibly complex, and there is not one story but many as the practice and meanings of foot-binding evolved and changed over time. In the beginning foot-binding was an elite urban fashion, not so different in a way from stiletto-clad westerners, achieving what was culturally conceived to be a sexy walk and to give the impression of small feet. And to be seen as wealthy and belonging to a privileged and exclusive circle.

All shoes have their own story behind them but is there a story you found particularly inspiring and if so what?

A pair of boots from 1943 were made by a local shoe maker in Kensington, London from the client’s old coats (one red leather coat, one ozelot fur coat). During the Second World War, the design of shoes was dictated both by a lack of materials and sensibility about what was appropriate. But these beautifully made boots circumvented wartime rationing. They push the boundaries of the acceptable, with scene-stealing red leather platforms and 10 cm high heels. The boots document the human desire for new and beautiful things, even in the midst of war. They show creativity, innovation and coping in adversity.

The exhibition runs until 31st January 2016 and is a must for all you shoe lovers out there.