The release of Mary Poppins Returns, a sequel to the original sixties made film, coincided with shops releasing some fabulous merchandise.  A new generation has been introduced to the magical nanny and Disney has shown it can move with the times.  A little less magical than the original, the film is still escapism at its best.

Given my love for afternoon teas, I couldn’t resist a visit to The Shard who are offering a Mary Poppins themed afternoon tea.  My husband was reluctantly going to accompany me, until he broke his toe, so Mum kindly stepped in and my husband treated me to a Mary Poppins Pandora charm as an apology; so all’s well that ends well!

I wanted to wear something that had an air of sophistication and a nod to a previous era, words which could also describe the film.  I decided a boucle jacket would fit the bill perfectly and saw a gorgeous one from Sister Jane but, unfortunately they are a sizest company and don’t go up to fat bloater size – so that was out!  Luckily I found just the one in Marks and Spencer.  I paired this with skinny jeans from Oasis and a plain white t-shirt.  I accessorised with red Sarah Jessica Parker heels, a red ‘Mulberry’ clutch and a geometric silver necklace from V&A museum.  The real piece, that set off the outfit, was a handmade large oval brooch depicting Mary Poppins’ tape measure and the slogan ‘practically perfect in every way.’  I purchased this online at Etsy, from a store called Shrinking Violet Jewellery, which I highly recommend.  The product was excellently made and delivery was fast.

After clearing security, the lift took us up 32 floors to the restaurant area of The Shard and we made our way to Aqua Shard – the restaurant offering the tea.  The corridors along the way have some wonderful illustrations depicting the map and sights of London.  As we were early we had a drink in the bar and took in some of the stunning views across London.  I noticed that some of the tables for tea had a window view and hoped we would get one, but was doubtful.  However I was pleasantly surprised when we were ushered over to one. 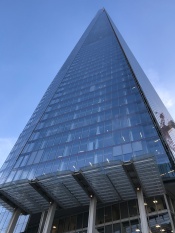 Many people would probably think the cost for this tea (almost £75 including tip) was over the top, even by London standards, but the theme was done fantastically and we couldn’t have asked for a better view or a more pleasant afternoon.  Goodness knows what it feels like to go up as high as the viewing platform as even on this floor, I was looking down on the roof of my old office and the trains looked like toys! 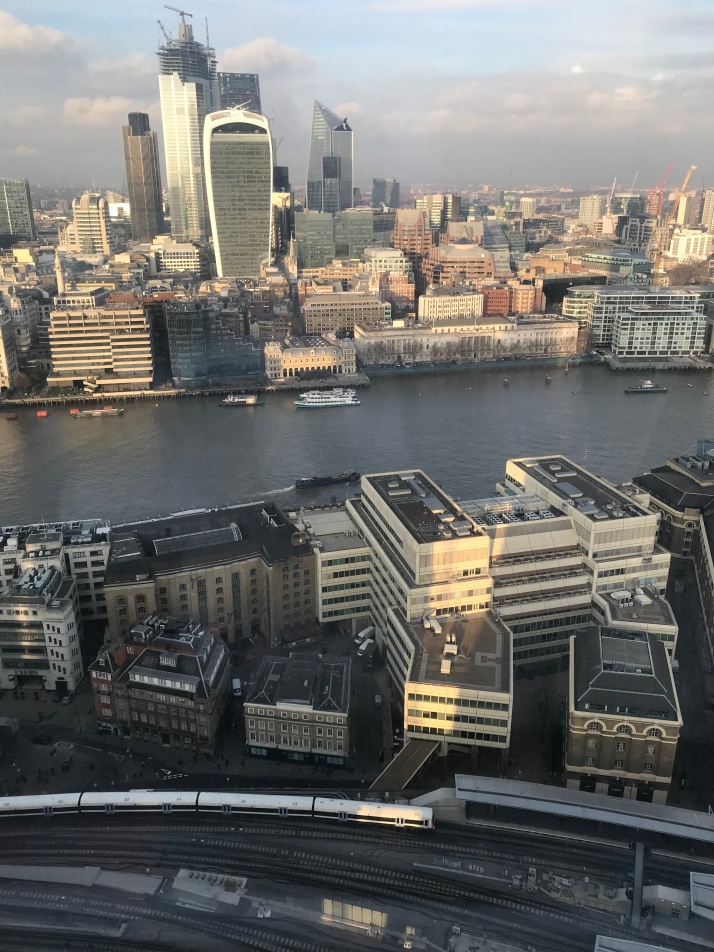 A mirror was handed to us that had the menu printed on it and all the crockery on the table was Mary Poppins illustrated.  Our glass of champagne (which was so smooth, you could tell it was a luxury one) was delivered to us and we had the choice of adding a flavour to it, which were in medicine like bottles on the table. 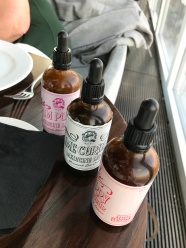 The tea stand itself was even themed with Mary Poppins umbrella on the top and her boots as the feet.  A tray of sandwiches was brought over while the stand was full of delicious sweet treats, including one that resembled Mary Poppins hat and a very novel tin containing a syrup desert. 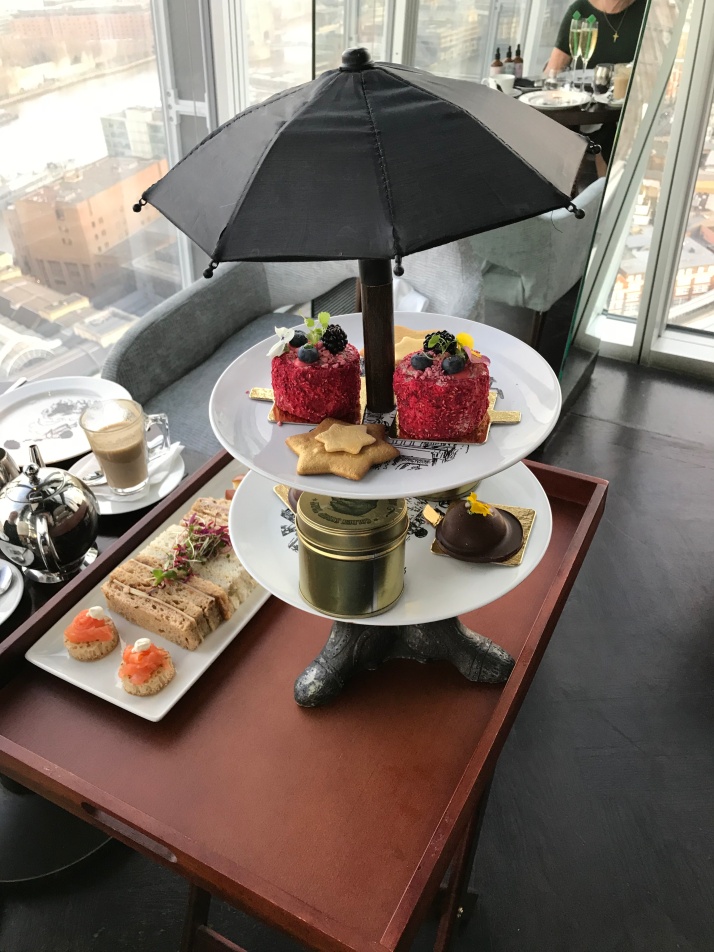 At this point, I was concerned that the key component of an afternoon tea was missing – the scones.  I need not have worried though as a rather handsome waiter arrived at our table and pulled a paper bag with them in, from a Mary Poppins carpet bag.  It was the icing on the cake. 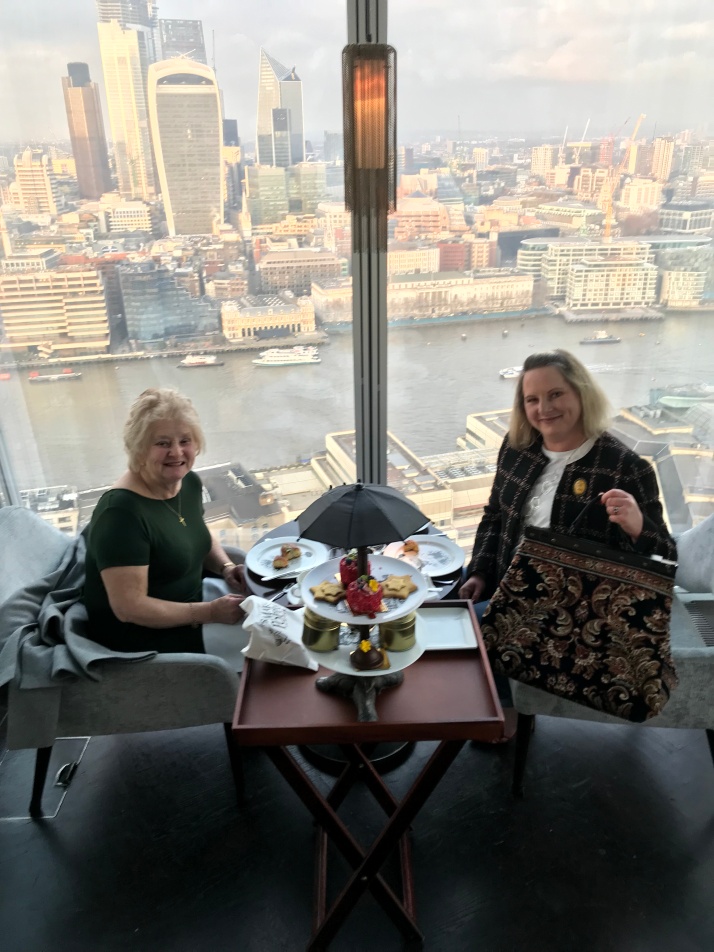 To finish off the fabulous tea, the final course was candy floss!  Talk about take you back to childhood! 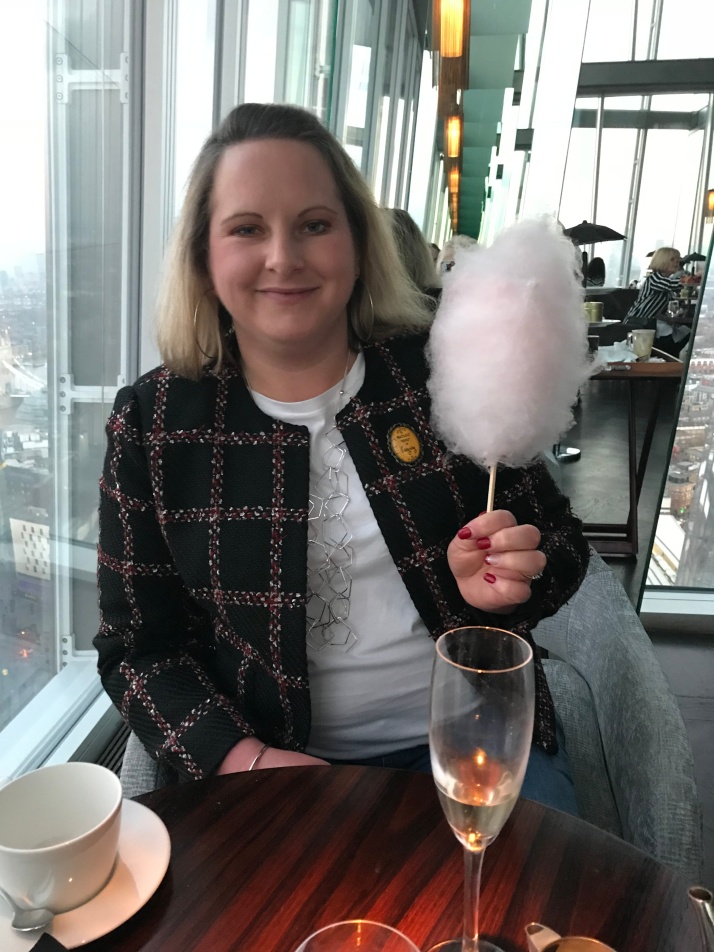 After all that we were both stuffed and had spent a wonderful afternoon having mother/daughter time and catching up.  By the time we left, darkness had enveloped the sights of London and we could observe all the pretty lights. 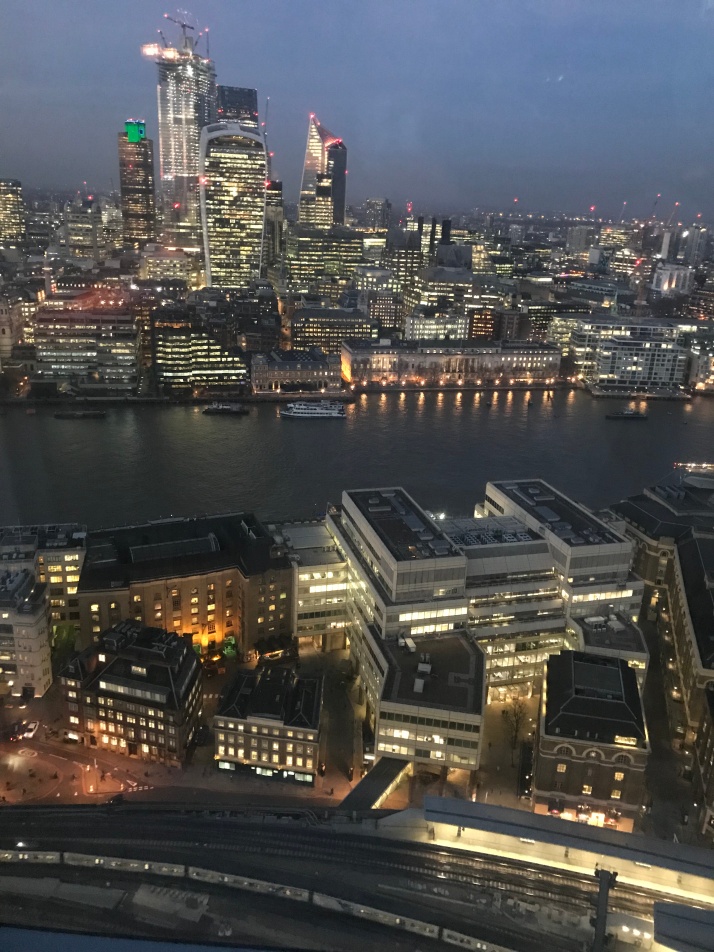 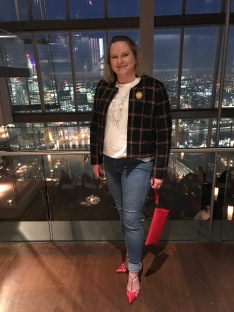 If you wanted to take some of the magic home with you, there was an opportunity to purchase a Mary Poppins book and themed tea leaves on your way out.

I highly recommend this tea for all Mary Poppins fans.  Escape reality for a few hours and be spoilt in a beautiful restaurant with an even more beautiful view – practically perfect in every way!