Vogue magazine takes its name from the French phrase ‘en vogue’, meaning ‘in fashion/style’.  Vogue started life in 1892 in USA as a weekly newspaper with the intended audience being the American aristocracy; America had glamour and showmanship but wanted to emulate Britain’s class and style.  The title may have been a consequence of the fact that during that time, both the USA and Britain looked to Paris for their fashion guidance.  Condé Nast bought Vogue in 1905 and changed it to a bi-weekly publication. It was as late as 1973 that it became a monthly publication.

The British edition of Vogue was first published in autumn 1916, so celebrates 100 years this year.  To mark the centenary, the National Portrait Gallery London has organised an exhibition entitled ‘Vogue 100: A Century of Style’ which runs from 11th February – 22nd May 2016.  The exhibition consists of some 280 prints from the Conde Nast archive and international collections.  The show is a who’s who of photographers, models and celebrities over the last century.  There have been over 1500 issues of Vogue to date and still it remains the authority on fashion.

For the exhibition I wore a navy long sleeve butterfly dress from Asos with a leather biker jacket from New Look to contrast with the girly butterflies and give the outfit an edge.  My shoes were some Mary Jane black patent shoes which I got in the Oasis sale and I absolutely adore the gold detail on the heels.  To match the shoes I accessorised with a beautiful gold and black box clutch from Aldo.  I had been admiring a very similar one from Biba but this one was a great find at half the price.  In my hair I had a navy suede alice band, the inspiration for which came from Chanel’s autumn/winter 2015 catwalk where the black ribbon was worn by their models. Ribbon always slides out of my hair so the alice band is a great alternative to achieve the same look. I also sported this trend in Hong Kong with a black leather alice band see previous blog. 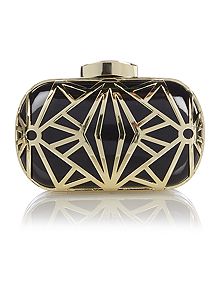 The exhibition was laid out with a room for each decade from the magazine’s birth up to the current day.  Many original images were used – with rips and scribbles to prove it.  The earliest surviving vogue print was one of an heiress to a Philadelphia banking fortune which featured in the third issue. There was also a long room which had laid out a copy of an issue from each year of Vogue’s production along with iconic images of models over the years displayed on the walls.  Vogue magazine has evolved over the decades and has seen some of the greatest defining fashion eras; the roaring 20’s, swinging 60’s and punk rock to name a few; what Vogue doesn’t know about fashion isn’t worth knowing and it is now considered by many to be “the fashion bible”.  Celebrities are desperate to feature on the cover.  As well as the exhibition being a tribute to fashion over the last century it is also a great overview of the key historical events in Britain with the tribute issue to each of the deaths of George VI, Marilyn Monroe and Princess Diana.  Cecil Beaton who proved to be a great asset to Vogue following his first published photo in 1924, covered the coronation of the Queen in July 1953.

There is somewhat of a lack of imagery from the early war years as in 1942 Vogue recycled the majority of its photographic prints to help the war effort.  Vogue was however vital to the morale of the home front and there were in depth reports about the war, showing a more serious side to Vogue.  The depth of report was not seen again until 1993 when Marie Colvin revisited post war Baghdad.  Post WWII, Norman Parkinson’s photos re-emphasised traditional values and signalled that the nation could once again think of prosperity. 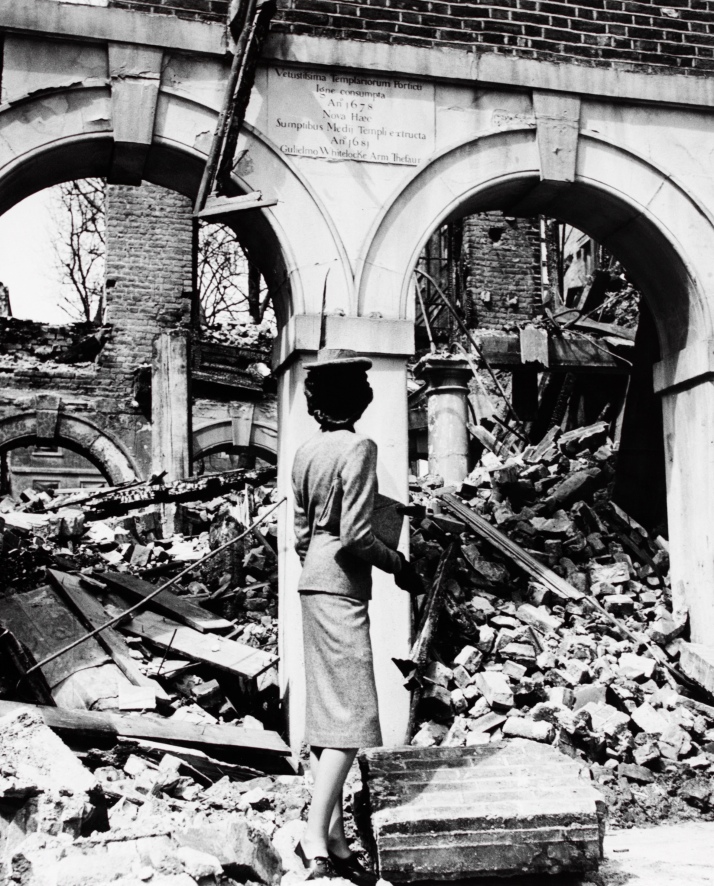 Early editions of Vogue came with patterns for women to make clothes but as the art of dress making lost its popularity and people had a greater disposable income to use in shops, these disappeared.

In 1953 Vogue revealed a new fashion demographic in the young and developed ‘Young Idea’ pages.  This youth culture strengthened through the 50’s and 60’s and in 1955 Mary Quant and Alexander Plunket opened a boutique in Chelsea aimed specifically at the young, called Green Bazaar.  Mary Quant claims to have launched the mini skirt in the 1960’s, named after her favourite car and later popularised hot pants.  The 1960’s were a classless period.  For Vogue, David Bailey became another prominent photographer at this time which is much attributed to his special relationship to the model Jean Shrimpton.

Vogue is known for its firsts – with 1966 seeing Vogue use the first black cover model.  Vogue’s first colour cover was as early as 1932 by Edward Steichen and Vogue led the field with the finest quality colour pages.  Vogue.co.uk was launched in 1996 and the first digital issue of the magazine was launched for iPad in 2010.  In 1936 there was a shoot called ‘April comes to Paris’, which saw fashions modelled in the streets of Paris rather than in a studio and it was novelty to see clothes in everyday situations.  It’s interesting to see how fashion photography has changed with the advent of airbrushing and Photoshop.  There was a print at the exhibition of a swimsuit shoot in 1930’s and you can clearly see it was shot on a cold day as the model has goose bumps on her legs – something they would never show nowadays.

The magazine featured Christian Dior’s first collection in 1947.  In 1939 there was an interesting spread entitled ‘Where there’s a will, there’s a waist’ showing the love affair Britain had with the corset. August 1994 saw the explosion of the Kate Moss phenomenon – an ordinary girl from Croydon and turned fashion on its head, changing the way we saw beauty and style.

My favourite cover was July 1926, Vogue constellation by Eduardo Benito and I was able to purchase a print of it in the store.

Following a couple of great hours spent immersed in the exhibition – my friend and I decamped to the gallery restaurant that overlooks Trafalgar square.  Despite the rain it was a lovely view of London and we enjoyed afternoon tea with a champagne cocktail each. 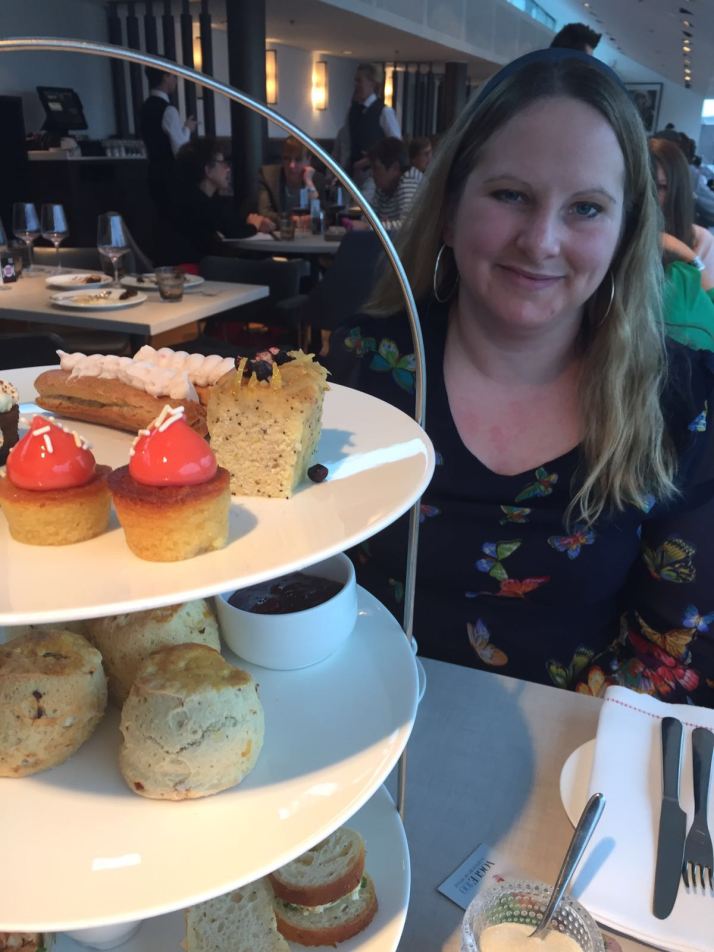 The first man to feature on the cover of UK Vogue was Manolo Blahnik in 1974.  Manolo Blahnik opened a new boutique in Burlington Arcade – only the second shop in the UK on 3rd Feb this year. I tried to get to the opening night cocktail evening but unfortunately it was already fully booked.  Would have been great to get a couple of quotes from him directly as my blog is named after him.  I did however visit the new store after the Vogue exhibition and it truly is a little bit of heaven.  I was almost intimidated by the luxury of the store and was anxious that my shoes, wet from the drizzle might mark the soft cream carpet.  I need not have felt anxious however as on entering the store, the staff couldn’t have been more helpful.  A lovely guy in purple Manolo’s showed us around the store. I pointed out my lovely wedding shoes as worn by Carrie in Sex and the City and he asked if I had worn them since.  He thought it hilarious when I replied only in the house and said ‘some people have slippers, you have Manolo’s!’  The store appears to be quite small until you make your way up a winding staircase to the second floor where more delights decorate the Victorian fireplace and shelves.  By far my favourite pair of shoes I saw was the rose bud sandals but at over £900 they are sadly out of my budget. 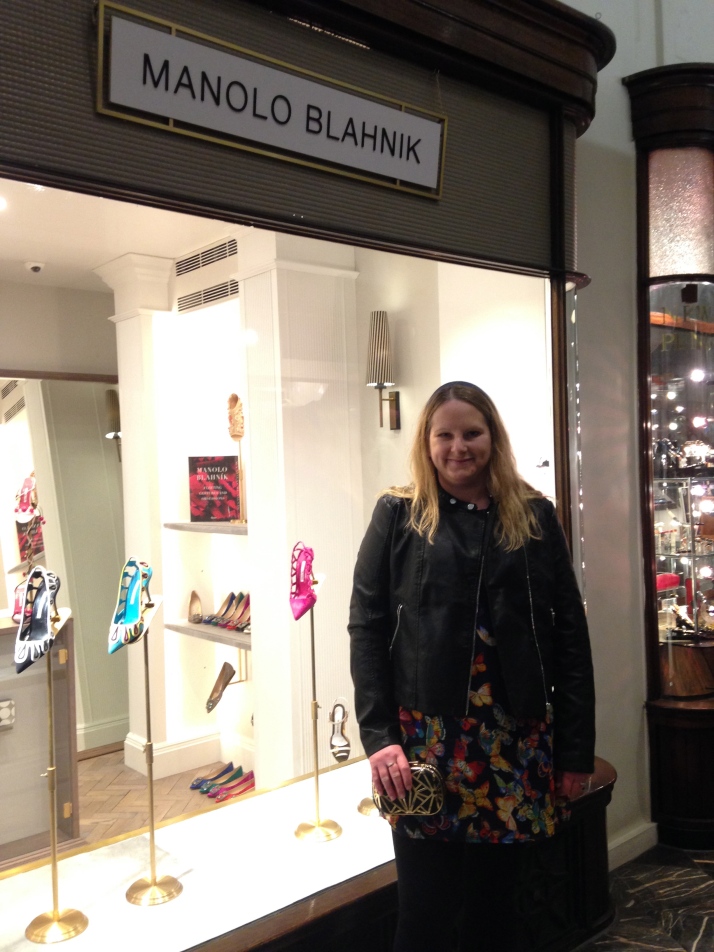 It was a fantastic day out and inspired me to start colouring in my Vogue colouring book that I received for Christmas.  2015 saw the rise of the adult colouring book with at least 4 of them appearing in Amazon’s top 20 book sales.  It has been suggested that they can assist with mindfulness and I did find it surprisingly relaxing. 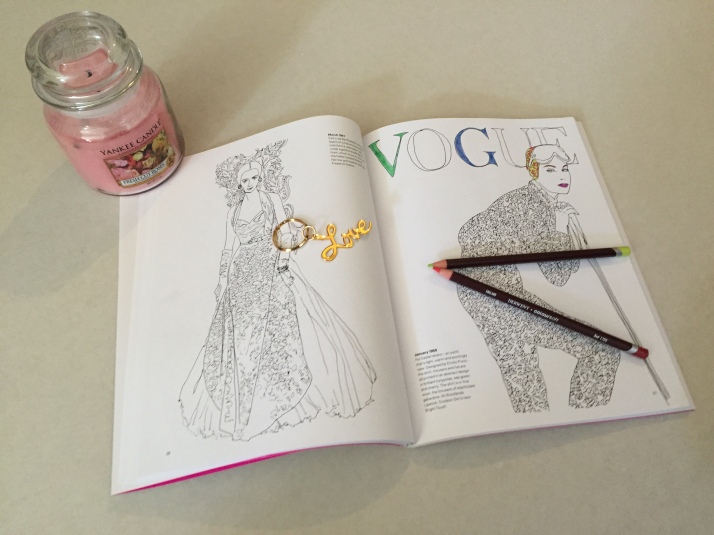 Vogue colouring book, ‘Love’ keyring as seen in first Sex and the City movie and a Yankee candle

Check out the Vogue exhibition whilst you can and they even do a combined ticket so that you can enjoy afternoon tea in the restaurant too.  It makes for a stylish girls day out.  Here’s to the next 100 years of Vogue!

On a beautiful hot, summers day my friend and I arrived with sea legs via the Thames Clipper in leafy, historic Greenwich.  After making our way through the thriving market area with many colourful and interesting stalls, we came out on Nelson Road to discover an intriguing shop owned by someone my friend used to work with. The shop is called Joli Vintage Living (Joli being a clever combination of the owner and her son’s names) with the added bonus of being like the French word ‘Jolie’ meaning pretty. The quirky shop, selling all things vintage, opened around two and a half months ago. The owner, Jo, used to work in charity shops for Save the Children and The Maypole Project. She has always had a love for vintage things and previously had her own shop that she had to give up due to family commitments; now her son has encouraged her to once again follow her heart. She selected Greenwich for its diversity in terms of people from every nationality and a good mix of tourists and locals.

As we entered the store the sweet sound of a baby grand piano welcomed us. You feel like you have been transported back in time as you are surrounded by beautiful furniture and crockery, some of which has been previously sold in high end stores such as Harrods. This then gives way to jewellery, bags and other accessories. As we made our way through to outside there is a back yard, harbouring many more classic items including an old highchair and pram, a stunning dolls house and a London bus stop sign as well as a rail of clothes.

Heading downstairs via a staircase decorated with London scenes on each step; a nod to the tourist clientele as well as vintage posters down the wall such as an advert for Audrey Hepburn in Breakfast at Tiffany’s there was the distinct sound of a vintage record player, before we reached two further rooms with more furniture and a host of clothes, shoes and bags. Everything is displayed expertly, with clothes ordered by era; it is like an Aladdin’s cave – every time you look, you see something new. Jo sources at auctions mainly as well as doing commission sales; EBay is not for her as she prefers to see items in the flesh so you know exactly what you are getting.

The shop began with furniture and home accessories but fairly swiftly branched into clothing when the demand for it became clear. Currently 80’s and 90’s stock is flying off the rails. I asked Jo what she thought the best era for fashion was and she thought the 50’s were very elegant but the 60’s and 70’s stand out for her due to the new found freedom people had. I couldn’t resist this beautiful dress, which although new, has been made in a 1960’s style. Currently I can’t quite fit into it but there is some motivation for the diet.

The most interesting pieces she had when I visited were the baby grand piano which attracted many a budding musician to tinkle the ivories; and some London traffic lights.

Only a short boat or train ride from Central London, a summer trip to Greenwich is a must on any tourists bucket list and this shop is not to be missed. The shop opening times are below: