My fast becoming favourite museum, the V&A, is currently running an exhibition entitled Ocean Liners: Speed and Style, until 17 June 2018.

The main draw for me to visit this exhibition was the fact that a piece of the Titanic was included, which has not been seen in Europe since the ship was built. I must confess to having somewhat of an obsession with the fated Titanic’s maiden voyage – not least because of the film starring Leonardo DiCaprio which was released in 1998. As an impressionable, young 14-year-old – I idolised Leonardo and wanted to be as elegant as Kate Winslet. I cried bucket loads when I saw the film at the cinema. Anyone who has seen the film, cannot forget the moment that Rose, laying on a part of the ship and floating in the atlantic, has to let go of Jack. This is what sprung to mind when I saw the wooden panel fragment from the first class lounge of Titanic, the largest remaining fragment from the ship, which was found floating in the Atlantic and is on loan from a museum in Nova Scotia, Canada.  It is in fact what the film’s set designers modelled the floating refuge on. 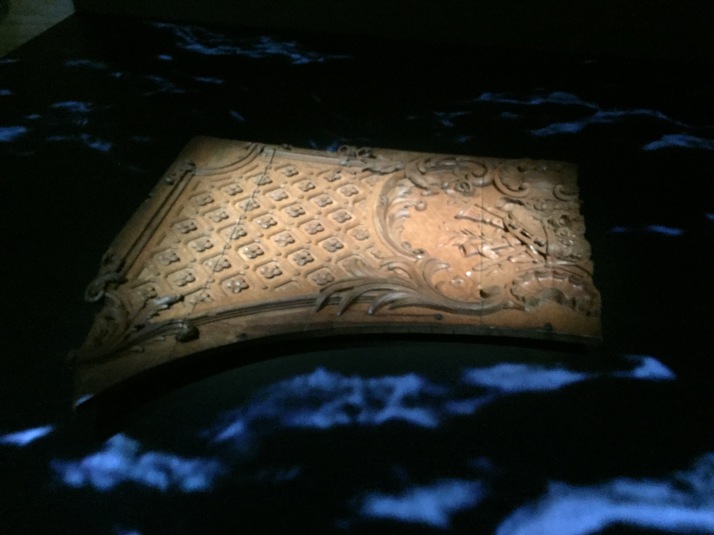 I was pleasantly surprised that the rest of the exhibition enthralled me just as much.  The exhibition is very much a show of the luxury that could be found on these ships all those years ago.  People were supposed to forget they were even at sea, as the great ships aimed to replicate first class hotels.

With the introduction of passenger flights in the 1960’s, Ocean liner trade declined significantly until it ceased in 1986 except for transatlantic crossings by the Cunard line shipping company. The cruise trade has boomed however.

The lines are blurred between descriptions of cruise ships and liners, and often the terms are used interchangeably. Liners had higher fuel consumption and fewer windows as their use was to transfer passengers from one point to another whereas cruise ships follow circular routes, sometimes with no stops.

Cruises nowadays are of course more of a relaxed affair – no longer are you expected to dress for dinner every night for example.  While this is good as it opens up the demographic, I can’t help but mourn an era where luxury ruled supreme; especially given that I have always had champagne taste and beer money!

The first room of the exhibition concentrates mainly on poster advertising for the liners.  You then move into a room where various interiors from different ships are mocked up – giving you a feel of the attention to detail, when they were designed with elaborate wooden carvings.  The next room was my favourite as it was very much focused on the fashion and the glamour. 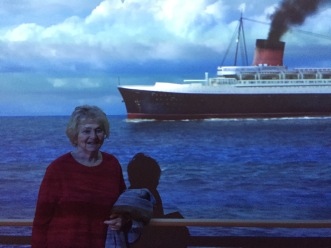 Mum, posing against a moving backdrop to give the illusion of being at sea

Christian Dior day suit worn by Marlene Dietrich arriving in New York on board the Queen Elizabeth in 1960 and luggage previously belonging to the Duke of Windsor, 1940s 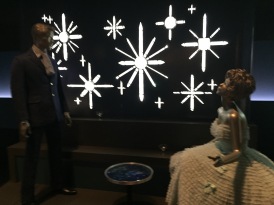 Art deco at its best 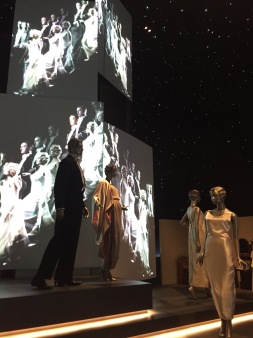 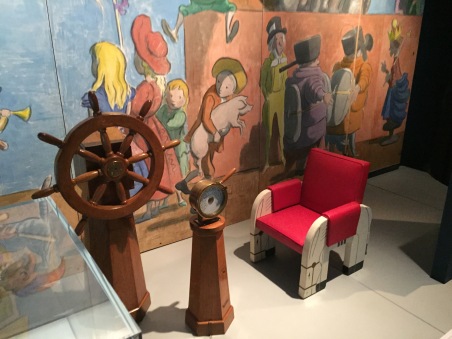 Children’s chair from first class playroom on the Normandie c.1934

Having enjoyed the exhibition, my Mum and I decided to sample a piece of the luxury, offered by London today.  We went for afternoon tea at Number Sixteen – a high-end hotel in South Kensington.  We enjoyed prosecco, sandwiches, scones and some delightful cakes in the orangery of the mid-Victorian white terrace, looking out on the beautiful private garden.

No girls day out would be complete without a visit to the shops, so we hopped onto the tube to Knightsbridge and visited the home of luxury, Harrods and browsed all the many delights I would love to be able to afford.