In May this year my parents celebrated 40 years of marriage which is an incredible 14600 days of matrimony. From that wonderful union they have 2 children and 2 grandchildren and they still love each other as much as they did on their wedding day. My brother and I clubbed together and bought them a garden companion seat with a celebratory plaque.

Sitting on their celebratory bench

What an achievement 40 years is in this day and age where people are all too quick to file for divorce. Marriage isn’t easy and has to be worked at but my parents are testament to it being possible for love to last a lifetime.

How different the world was in 1976 when they married. Technology which we now take for granted was in its absolute infancy. Can you imagine a time when you couldn’t just google the answer to any question that popped into your head and you had to wait in at home if you were expecting someone to call you? 1976 saw Ford release the first Fiesta which was to become in 2014 the UK’s bestselling car, Concorde did its first commercial flight, England won Eurovision and number 1 the week of my parents’ marriage was ‘Silly Love Songs’ by Wings.

Traditionally the 40th wedding anniversary is referred to as the Ruby anniversary. This association is because the ruby is believed to have an eternal inner flame which glows brighter each year just like the passion and love in a marriage.

My parents decided this landmark was worthy of a big celebration so my Mum and I set about planning an event akin to a small wedding reception. Dinner was held at a golf club for family and friends with a DJ after. We decided on a theme of travel which may seem ironic to those of you who know my Dad well as he hates holidays. However I thought the travel theme was appropriate in more of a metaphorical way because of the journey they have made together through 40 years of marriage.

An old suitcase was used for the table plan and we hung a luggage tag for each table’s guests inside. Each table was named after somewhere my parents had visited together – thank goodness we didn’t have more than 5 tables or we would have been stuck on locations with their limited holidays! The table name was stuck on a cut out of a suitcase and a photo of them in the place put on the back. Place name cards featured a suitcase logo. The centre piece of each table was a single red rose – a symbol used to denote total devotion to one person.

I made up favours for the tables which were love hearts in a ruby coloured organza bag and I made a cake for them with a photo of them cutting their wedding cake on the top. 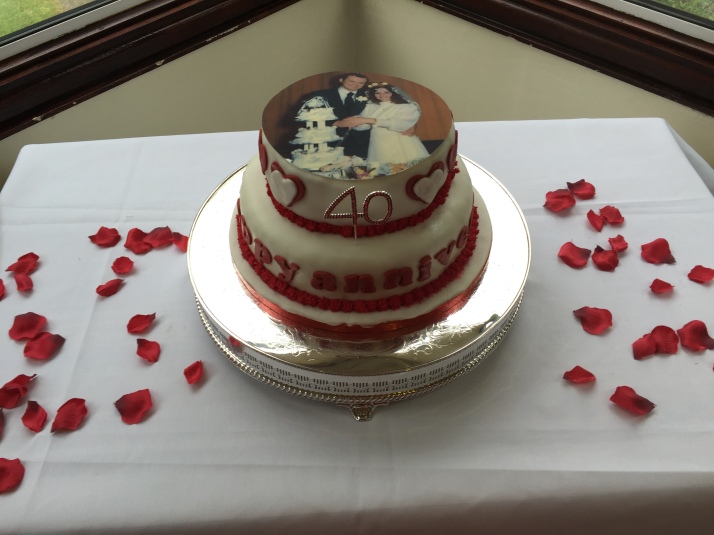 For the event I wore a dress from Coast, similar to the style of my bridesmaid’s dress at my wedding and reddish/pink in colour to tie in with the ruby theme. I accessorized with some silver diamanté sandals which I got in John Lewis when I was a bridesmaid at my friend’s wedding (see I do wear some shoes more than once!) I also had this gorgeous fan shaped metal clutch with a 1920’s art deco feel to it. I got this from Vintage Styler.  I added a red butterfly clip in my hair.

At the entrance Mum decorated a small table with old photos from the day, decorations from the wedding cake, along with her garter, which was her something blue, blue being seen as a colour representative of constancy and loyalty; and other trinkets hooked over her arm on the day including a horse shoe and a rolling pin. The rolling pin would have been seen as something useful to give a wife so she could make meals for her husband (often a wooden spoon traditionally rather than a rolling pin) and a horseshoe for good luck going back to the 10th century when horseshoes were used to mark the door of Christians thus protecting them from the devil. Many wedding customs are the same today although the gifts hooked over a brides arm are not so common nowadays – I know I didn’t receive any at my wedding.

My Dad gave a wonderful speech which detailed how they met as a blind date and how he had always loved her and the speech ended with him presenting her with a ruby ring. I also gave a short speech which included a poem which my uncle composed music to and sang at the wedding but unfortunately he was unable to make the party for a second performance of it. The poem is called ‘The Life that I Have’ and was originally written by Leo Marks in 1943 for his girlfriend who had recently been killed in a plane crash. It was used as Poem code during the Second World War. It was common for secret messages to be passed using a poem as code but was proving unreliable as the enemy could find the original source of the poem – Marks got around this by using his own creations. The poem was famously used in the film ‘Carve her Name with Pride’.

A fantastic evening was had by all and it was beautiful to see Mum and Dad dance once again to their first song from their wedding ‘I’d like to teach the world to sing.’

The month of May also saw my husband and I celebrate our second wedding anniversary. Cotton is the symbol given to the second anniversary symbolic of the couple becoming closer and their lives becoming more intertwined. It is also said to represent the couple learning to be flexible and adapt to each other’s needs as cotton is both strong and soft. I bought him a shirt – which he wore to Mum and Dad’s do and some cotton trousers. He bought me a cotton vintage quilt I had fallen in love with from the shop Kiss Kiss Heart in Rochester. We celebrated with a trip to Port Lympne Safari park (one of our early dates) and a curry in a new Indian restaurant in Rainham.

Two years has flown by and I’m sure the next 38 will too. I hope we can be as happy at 40 years as my Mum and Dad obviously are.