The first weekend of July was a fantastic one, if very hectic with my Indian friends wedding, birthdays and a trip to Kensington Palace.  I took the Friday off work and pampered myself; having my highlights done and finger and toe nails painted.  I then set about making birthday cakes; Ben 10 for my 6 year old nephew and Peppa Pig for my 3 year old niece.

Friday evening was the Sangeet night for my bride to be friend.  This is a ceremony which takes place before a Punjabi wedding and in this case was combined with the mehndi ceremony.  Women only customarily attend the Sangeet night with a few men attending if they are close to the bride or groom.  The event was held at her house and was like a wedding in itself.  There was a marquee, a DJ and staff serving food.  The beats of the Indian music were already in full swing when I arrived and certainly was in keeping with the English translation of ‘Sangeet’ as ‘sung together’.  The many colours of the saris were breathtaking.  It is traditional for the women to wear vivid colours to add to the festival feel at a mehndi ceremony.  I wore a bright red lacy dress.  Mehndi is henna used as a temporary skin decoration and is applied to the hands and feet in very intricate designs.  It is traditional for brides to have very elaborate designs; sometimes with the groom’s initials hidden in it.  I couldn’t wait to have my hands done and was amazed at the wonderful patterns created freehand with a henna cone which looks rather like a piping bag.  As the henna dries it forms a hard layer which then cracks and falls off to reveal a reddish brown stain.  Oil is applied to the hands to darken the pigment.  The henna lasts for approximately one week. 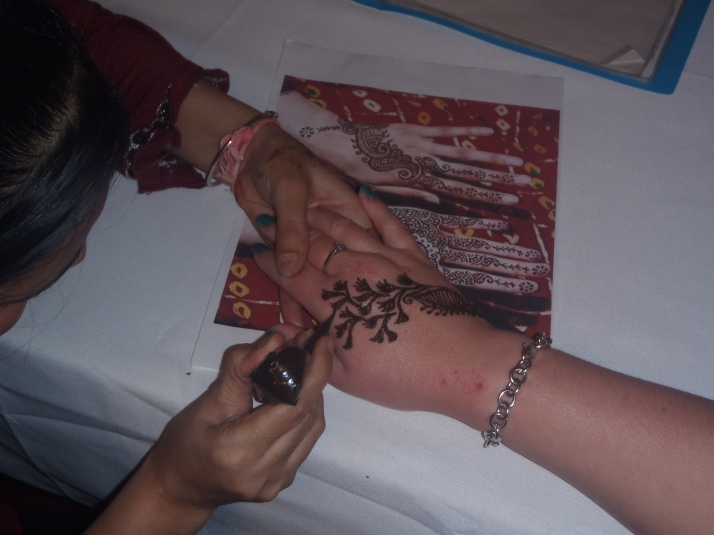 The delicious scents of Indian cooking set my taste buds alight.  Following food, there was much traditional dancing and the DJ’s music was also accompanied by the dholki which is a traditional two headed drum with cotton rope lacing.  It was a wonderful experience and on leaving her mother gave me a beautiful bag filled with Indian confectionery.

On Saturday I headed up to London for some British history with my Mum, aunt and cousin and we visited Kensington Palace. This was the home of Queen Victoria before she became queen and many royals have or have had apartments there; including Diana and now William and Kate.  Some of the highlights for me were Queen Victoria’s wedding dress and an assortment of Princess Diana’s dresses.

Another of Diana’s dresses

Sunday was the day of the wedding itself.  I ordered a Lehnga Choli especially from India for the occasion and also wore gold bangles.  A friend gave me a bhindi to complete the look and I wore gold, jewel encrusted heeled sandals.

We arrived early; around 9 at the Gurdwara.  I thought that was an early start but it was nothing compared to the bride herself who had been up since 4.30 am having her make up applied!  The bride was kept in a room by herself as she was not to see the groom before the ceremony.  The Baraat then arrived which is the groom’s procession.  He carries a sword and male and female relatives of his walk behind him.  He looked fantastic in his traditional dress.  Milni then took place where the bride and grooms family formally greet each other beginning with the fathers.  Garlands are placed around each others necks and prayers read.  Breakfast for all then commences.  This comprised of samosas and onion barjis with traditional Indian tea and the very addictive Indian sweets.

We then all make our way to the main area of the Gurdwara where the ceremony is held and we are required to remove our shoes, cover our heads and men and women sit on separate sides on the floor.  I must admit I was rather worried at the prospect of locating my shoes again in the racks and racks of them!  The main ceremony is called Anand Karaj which translates as blissful union.  As we entered, we were required to walk up to the Guru Granth Sahib (the holy book of the Sikhs which is the scriptures of the ten Gurus of Sikhism), kneel down and place money in a box in front of it.  The Guru is treated like a human Guru and as such respect is always shown and no one must sit higher than it hence sitting on the floor.  The book is placed on brightly coloured cloth and has a canopy over it.  The Giani (priest) waves a Chaur over the Guru as a sign of dedication and respect.  The Chaur consists of yak hair on a wooden or metal handle and dates back to the times when people would gather round one of the ten Guru’s to listen to his teachings and fan him because of the hot climate.  The bride then entered and looked absolutely breathtaking in traditional red and gold with bracelets with like cymbals hanging from them.  She must wear the bracelets for 40 days after the marriage although some can be removed after 11 days.  The bride and groom then sit at the front with the bride on the groom’s left.

Unfortunately as the ceremony was in Punjabi, I could not understand it but essentially the groom has a sash over his shoulder called a palla and one end of this is placed in the bride’s hand.  As each of the Laava (four sacred hymns) are read, the bride and groom circle the Sri Guru Granth Sahib and on the fourth circle they are married.  A Sewardior servant then brings round karah Prasad.  This is a sweet pudding made of semolina, sugar and butter.  It is prepared in a special way with prayers and should be received in cupped hands lifted up for the Sewardiand then transferred to one hand and eaten with the other.  It should never be refused or given away.  It was very nice and this marked the end of the ceremony. 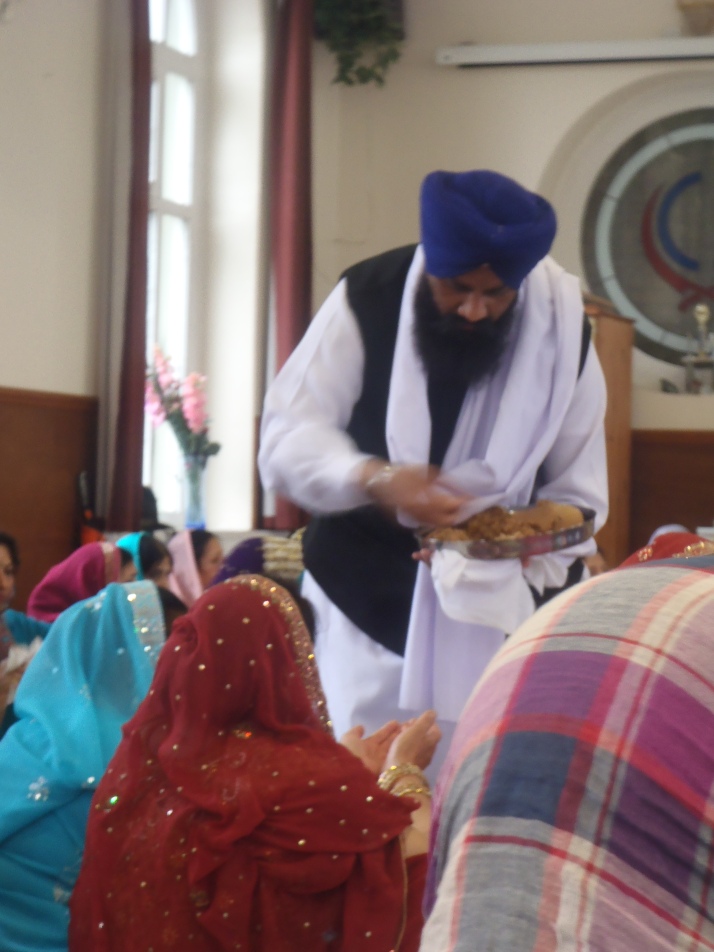 We then all travelled to a community centre where the reception was to be held.  The weather was against us with torrential rain but as I mentioned in my blog last year when my other friend got married, rain is seen as lucky on your wedding day, signifying a lasting union.  Thoughts of the weather were soon banished though as we entered a marquee containing a chocolate fountain, fruit, champagne and various tasty fruit juices including lyche. 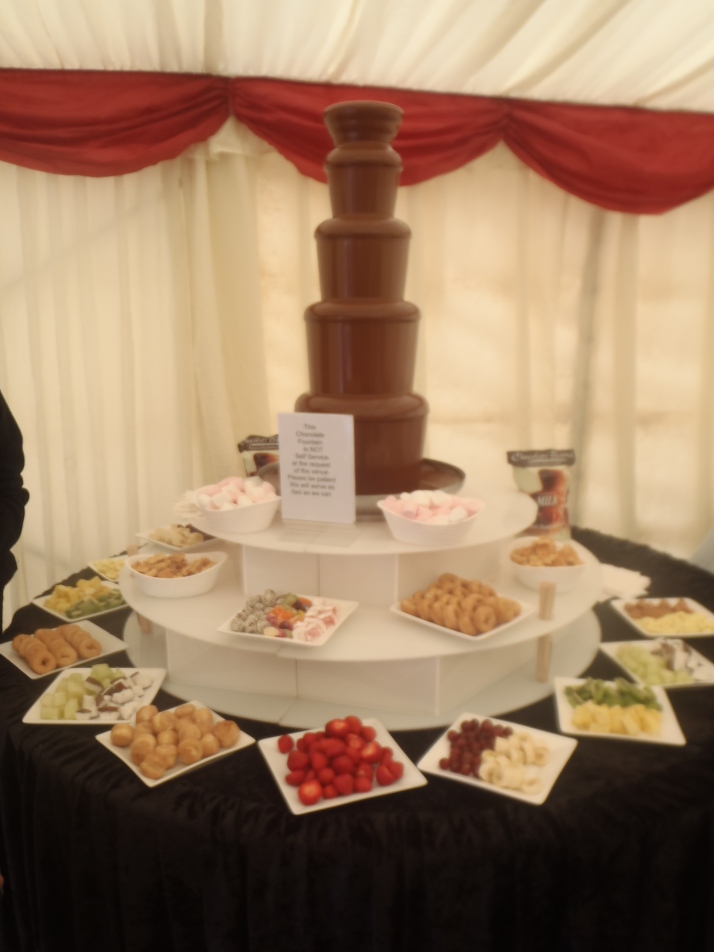 Once seated the starters were brought out which were delicious.  The bride and groom then arrived to a chorus of dholki with the family in a procession behind them.  The cake was then cut and they had their first dance to Googoo dolls which was lovely. 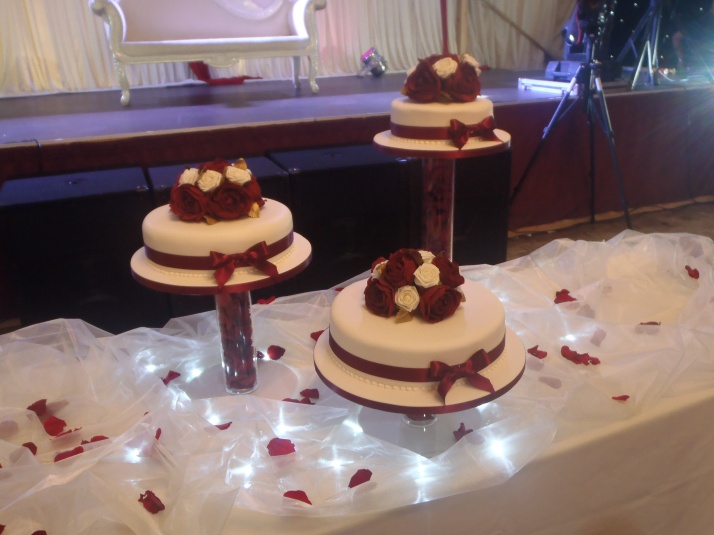 The bride and groom then sat on the stage in a lovely white chair.  Photos were taken and people went up in turn to congratulate the couple and place money in their laps which is the custom rather than wedding gifts.  Our main was then served and the mother of the bride handed out boxed confectionery to us.  There was then much dancing until an early finish for the bride to return to her house for a farewell with her family before going with the groom and his family to where they live.  As the bride and groom left, we threw confetti and waved them off.  It was a wonderful day and it has made me more adventurous with Indian food.  When my boyfriend and I went for a curry on Saturday night, instead of my usual Korma, I ordered Chicken Darjeeling which I enjoyed very much.

To end with another celebration; on 20th July I went to see the Olympic torch relay come through Medway where I live.  It was lovely to see the community spirit and the pride of the country that we are hosting this great event.  People were out on mass with their Union Jacks and the crowd buzzed with excitement.

I am fortunate enough that this is my second viewing of the torch as I saw it in Skiathos in 2004 when Greece hosted the Olympics but to see it in my own town was something far more exciting.

Anyway I shall end there.  Did you see the Olympic torch or perhaps you would like to share some interesting wedding traditions of different cultures?  Until next time….