I can’t believe that five years or half a decade has passed since I married my soulmate on a beautiful hot May day in true fairytale style.

The traditional gift associated with five years of marriage is wood.  Since ancient times trees have been thought to symbolise strength and wisdom.  The idea is that after five years, deep roots have been formed meaning that the relationship is strong and you are wiser in that you have learnt from early mistakes and disagreements.

I was a bit stumped (no pun intended!) on a gift for my husband but saw they had released a limited edition Formula One print to celebrate the 1000th race which I knew as an avid fan he would love so got that and a wooden frame to put it in so it fitted with the theme.  He got me a wonderful wooden swing seat for the garden – something I have longed to have for many years.

We always like to do something nice to celebrate our anniversary and if possible go away somewhere.  I am a devoted reader of Stylist magazine and when I saw Mollie’s Motel & Diner featured in there, I just knew that was where I wanted us to go for our anniversary, especially as we had considered doing route 66 across the USA later in the year, before ruling it out given the amount of daily driving we would have to do because annual leave would mean we could only go for two weeks.

Located in Buckland, Oxfordshire, Mollie’s as their website describes it, is a nod to 1950s America.  It is a motel, diner, drive-thru and a general store which opened earlier this year. 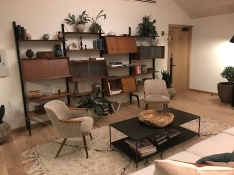 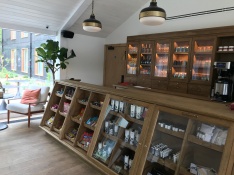 The place still had that lovely new smell to it and the staff were so welcoming, particularly Natalie on reception who ordered us complimentary Prosecco for our room to celebrate our anniversary.

The rooms were absolutely stunning, with large beds covered with crisp white sheets against a wooden clad headboard and a shower that was to die for – easily the best shower I have ever had.  Complimentary Cowshed products were also provided.  It felt like a true taste of luxury at a reasonable price.

The diner didn’t disappoint that evening either.  Not only was there a great 50’s American vibe but the food was delicious and American size portions too!  I had an Oreo milkshake which was a little bit of heaven, cheesy nachos to start, followed by a dirty burger and finished off with a humongous chocolate brownie. 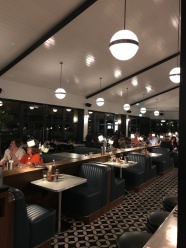 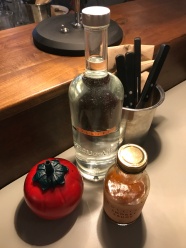 I wore a dress from Oasis which has proved to be a great transitional piece with its long sleeves and the fact it looks good with boots, shoes or sandals.  I wore pink pointed buckle shoes, also from Oasis and finished it off with my Dior look-a-like saddle bag from River Island.

The following morning, not wanting to miss out on Parkrun, and needing to burn off last night’s indulgence, we went to one near the motel at Whitney.  They were a really friendly bunch there, but it was a bit of a tougher course, spilt over narrow woodland, some road side and some on the grass.

After that workout, we had a well earned breakfast back at the diner which for me consisted of pancakes with mixed berries and a banana milkshake.

The t-shirt I wore that morning was from Shein – an online boutique I have recently discovered through Facebook.

Five years has flown by and while I would be lying if I said the whole five years was blissful, our marriage has grown and we have a far deeper understanding of each other now.  I don’t know how he puts up with me sometimes!  I never want to imagine life without him.  Here’s to the next five years and then the eternity ring!