The onset of December found my emotions in turmoil as I had somewhat of a midlife crisis. The phrase ‘midlife crisis’ was the brainchild of Elliott Jaques and states it is ‘referring to a critical phase in human development during the forties to early sixties, based on the character of change points, or periods of transition’.

My so called crisis might be occurring in my early thirties but it certainly was during a period of transition. Perhaps it’s a late quarter life crisis. Suddenly I am questioning all my past choices, pondering my future options and wondering if I am missing out on things. I think half the problem is I want it all and unless you are a millionaire, it’s just not possible to have it all. The snag is that by taking one road in life, the others are left untrodden; you will never know what would have happened if you had taken one of the other roads – every action has a reaction. Life is short, often too short and death eventually comes to us all; David Bowie being a case in point. What matters though is that we enjoy the time we have and experience as many things as possible. We can hope that we leave a lasting impression on the world which there is no doubt Bowie did. I would like my writing to be my legacy and hence I have toyed with the idea of writing full time.

My husband and I have just bought our first home together see previous blog and despite me paying towards the last one; this one feels like it is both of ours as we chose it together and my name is officially on the mortgage, so I feel like I now have responsibilities. The baby question is asked constantly as is the case as soon as you get married but as I wrote previously I flit between two camps on this decision.  Marriage is something I have always wanted but I sometimes wonder if I focused too much on this when I was younger, rather than embracing dating, the single life and my ambitions more.

The lead up to Christmas was fairly busy. At the beginning of December I got one of my Christmas presents early which was a trip to the Coronation Street set. As sad as it may be, I have been watching Corrie for about the last 20 years and it’s one of the few programmes I never miss. Coronation Street first aired on 9th December 1960 and is the world’s longest running soap opera still in production. The set moved location from central Manchester, Quay Street to Media City in Trafford in December 2013 and following the move, the Coronation Street Tour was set up at the old site. The tour was originally due to close October 2014 but was extended until 31st December 2015 so this was my last chance to go. Despite the abysmal weather it was lovely to walk the famous cobbles and see some of the interior sets and costumes. The wardrobe department buys items in shops it believes the character would typical shop.  In a month the make up department gets through 6 eyeshadows and eyeliners, 15 bases, 4 blushers and 10 lipsticks!  We got to have a photo behind the bar at the Rovers and being the rebellious one of the tour group, I had to ring the bell for last orders!

Sometimes my life feels a bit like a soap opera, in that I feel what I do will be watched and judged by others. I guess the modern social media culture has only enhanced our knowledge of other peoples lives and to some extent is the only way I get to unleash my writing on the world.

We combined this trip North with seeing my oldest friend from school who had her baby at the end of October. My outfit for this occasion was a denim pinafore dress with a white pussy bow blouse underneath, both from Oasis and some snakeskin black ankle boots from New Look. The pinafore was a big trend for autumn 2015 and the trend looks set to continue into early 16 with a 60’s revival going on. The key to the look is layering and on Boxing Day, I wore it again with another season must have, the polo neck.

Early December I was suffering some kind of chest infection so finally got to meet my best friend’s baby boy on 16th Dec when he was almost a month old. All these babies coming on to the scene this year within my friendship group have probably been one of the catalysts for this early mid-life crisis. I realised that the dynamics of our group had drastically changed. No longer are we the care free twenty somethings, who’s biggest worry was what bar to go to on a Saturday night; we all have responsibilities now and are perhaps what you might term as ‘fully grown up’.

The week before Christmas I went to see my favourite band, Stereophonics at the O2. I have lost count how many times I have seen them and usually they don’t disappoint, however as much as I still enjoyed this gig – it wasn’t as good as all their previous ones. I looked around the arena and everyone looked to be in their 30’s or 40’s and there was even a pensioner there. This was the other catalyst for the mid-life crisis. I suddenly realised these people were my age and how long I had been supporting the Stereophonics. Kelly, the lead singer even brought on his two daughters which finally shattered my hopes of ever going out with him (joke!).

Christmas was a family affair and spending time with my nieces and nephews again makes me question if and when I want to have children myself. My present to myself was a pair of New Look black suede, fringed heels which I wore Christmas day and Boxing Day, as well as to a gathering at one of the new neighbour’s. These sorts of treats would of course become a distant memory if I were to have children or become a full time struggling writer. 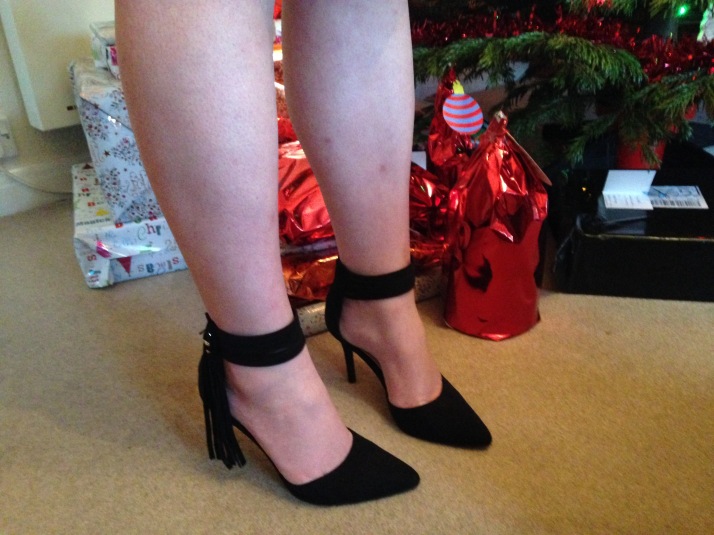 One of my nieces we treated to a fashion design tool as when I was clearing out, I found designs I had done with my fashion wheel. Unfortunately they don’t sell the fashion wheel anymore and I have to say that this is a time where the new toy is not an improvement. Instead of rubbing over the plates to get an outline and then colouring it in, you now have to trace the outline which requires much more patience.

A sign of the times was the same niece telling me that when she grows up she wants to win X Factor and her brother wants to be a You Tuber. I must be old as she then had to go on and explain to me what a You Tuber was. What happened to ambitions like being a nurse or a vet? I question whether I made the most of the opportunities I had when I was younger. I never saw myself as working as a PA as I do and whilst I did at one point fancy being a vet; my most enduring ambition was to be an air hostess. Despite once getting through the interview for British Midland, it never quite fitted in financially or relationship wise.

There’s no point ruminating over the past, it cannot be changed but the future can and that brings me on to New Year’s Eve. New Year is a chance to start afresh on a new road and reach out for what is truly important to you.

This year for the first time in ages I was invited to 3 parties! Like buses they all come at once. We went to a friend in Bromley’s house party which was enjoyable despite only knowing the hosts. I wore a gold sparkle dress from Oasis with leggings and some gorgeous suede red sandals I got in Marks and Spencer especially for the occasion.

After a quiz which my team won, they got out the game of 2015 – ‘Pie Face’. For anyone who has missed this phenomenon, you essentially put your face down on a rest and have to twist according to the number you get on the spinner. Eventually a hand is released which throws cream in your face!

There was no way I was going to have a go after the time I had spent on my makeup! It’s not often I really make an effort now but for this party I went all out. Here are the products I used to achieve my look.

After we toasted in 2016 at midnight we set off Sky Lanterns or Chinese lanterns as they are often referred to. The idea is to make a wish before you let the kind of mini hot air balloon fly away. They are not illegal in Britain but have been banned in many other countries despite them having been used for centuries. This is because there is a danger when they come down that they might cause fires or harm animals. Ours never took off which I don’t know what that says about our wish for the New Year.

So the time has come once again for resolutions. Inevitably we all make them and then promptly break them by February. I saw an interesting post on Facebook with a lady sipping a cocktail on a weight machine that said ‘I said I’d give up alcohol and go to the gym; I made it to the gym!’ One thing I am determined to do is lose weight. I’m not going to do a Bridget Jones and let on to you how much I weigh, along with an analysis of each day’s calories, but suffice to say I am heavier than ever and wearing the biggest size clothes I ever have. I need to lose around 3.5 stones and I am really serious about it this time. No more fad diets, I am just slowly going to reduce my intake of food (not alcohol – that would be an empty promise!) and try and get back into walking regularly. I love my fashion and it just doesn’t look right on me anymore. My thirties should be a time of being comfortable in my body before old age sets in and I really am not comfortable at this weight. Yes you can be confident at any weight but I am not and the time has come to really take action.

I suppose I am seeking excitement and change – perhaps like Madonna I need to reinvent myself every decade. Further hinting at the diagnosis of a mid-life crisis I am considering on one end of the scale a change of hairstyle to the other end of the scale with a tattoo and in between somewhere comes the idea of another piercing. We will just have to see what the year brings; you never know, I may even learn to be content; I wouldn’t hold your breath though!