And Just Like That, the long awaited Sex and the City reboot is over, and I find myself disappointed, desperately hoping for a second series and wondering what I will now have to watch on a Thursday evening.

I have been a major Sex and the City fan for years now, as anyone who has followed my blog will know. I actually only really discovered the TV series a year or so before the first film came out, so long after it originally aired, but have since watched all the episodes many times over. I waited at the movie premiere to catch a glimpse of the stars, went on the movie tour in New York City, sought out the series locations when I visited Paris and even had Carrie’s blue Manolo’s as my wedding shoes.

I used to compare my relationship at the time I first started watching with Carrie and Big’s relationship, thinking that was an example of true love but actually I now know that true love shouldn’t be that hard. I am now happily with my Aidan and I had hoped we’d see the return of Aidan in this sequel and Carrie would see he was the one that got away, but sadly not.

Anyway, I was eagerly awaiting a chance to spend more time escaping to New York City and enjoying the glamour and the fashion with my favourite characters. The first episode however left me rather disappointed. For a start, the dynamic wasn’t the same without Samantha. Then there was the way they were trying so hard to be woke, making up for the inequalities of Sex and the City, that it was cringe worthy, and don’t even get me started on Carrie destroying her iconic blue Manolo’s in the shower whilst cradling Big as he died! How could they kill off one of the main characters in the first episode? Mind you given the revelations about Chris Noth, perhaps that may prove to be a wise decision for the future of the series. Should I continue investing in this, I wasn’t sure.

I am so pleased I did persevere though. For me the real strength of the series is the enduring friendships. They are there for each other no matter what and support each other even when they disagree. I hope I still have my same group of friends to go out to lunch with in my 50’s. The fashion is still a joy to see, showing that fashion isn’t just for the young, although I’m not sure what the thinking was behind the bright orange Valentino ballgown with pink elbow length gloves Carrie wore to scatter Big’s ashes in the final episode but I did love the diamond encrusted Eiffel Tower bag which contained his ashes! It was lovely to see the Versace dress of a thousand layers again when Carrie is going through archiving her closet, a nice nod to Sex and the City and that final episode in Paris. There were various nods to Sex and the City but I think they missed one opportunity to once again link back to Sex and the City in the final episode when Che asked on the podcast “What’s your worst break up?” and Carrie replied “My husband died” I was screaming at the TV, the post-it note!

So should we revisit other shows from the nineties and early noughties or should we leave them in the past where they belong and just remember them fondly?

I think the desire to revisit comes partly from our investment in the characters but more so as it reminds us of the happier, carefree times of our youth and let’s face it, most people view the past through rose tinted glasses. It’s also a chance to relive the things we enjoyed growing up, with our children or nieces and nephews.

I recently watched Mean Girls with my twelve year old niece and I think that film is just as relevant today as when it was made in 2004. Girl’s still identify with it as there are still the same cliquey groups and rules you feel you have to follow to fit in. “On Wednesday’s we wear pink.” There was a Mean Girls 2 in 2011 and the girls had a reunion in 2020 to encourage people to vote in the US elections and to celebrate the longevity of the show.

Pre pandemic in 2019, which feels like a million years ago now, my friend and I went to a themed evening of Mean Girls. A leisure centre in London Marylebone, was transformed into North Shore High School for a screening of the movie, with themed photo opportunities, food and drink inspired by the film, and our own Spring Fling after. In the words of Gretchen in the film, it was “so fetch”. You were encouraged to come dressed in pink or as your favourite character, so I wore a cerise pink dress from French Connection.

Last year we were treated to the long awaited Friends Reunion. I can remember watching Friends on Friday nights as a teenager and ever since the re-runs can always be found on some channel or another, ideal for a lazy weekend day, just like a comfy pair of slippers. It was another show I was a great fan of and probably where I first fell in love with New York City. So I was excited by the thought of revisiting Chandler, Ross, Joey, Rachel, Monica and Phoebe. It was nice in a way that it wasn’t a continuation of the story but more the cast getting together on set and looking back at some of the fun they had during filming and their favourite bits, plus interviews with the writers and other stars. It’s like one of the producers/writers said, this was a series about a time in your life when friends are your family and I sure remember that fondly. There are so many classic lines in Friends and it doesn’t matter how many times you watch it, it’s still funny. It is so sad when something that has been such a big part of your life comes to an end, after all it ran for 10 years and was the most popular sitcom for the whole six series, but time moves on and so too must the characters.

Christmas 2019, I had a great evening with a friend at Friends Festive in London. They mock up all the sets and there are loads of photo opportunities along with themed food and cocktails.

Today I finally started to build my Friends Central Perk Lego set that I bought in lockdown but never got around to. There’s something very relaxing in regressing to childhood and building Lego – trust me – don’t knock it until you’ve tried it!

Talking of reliving childhood, let’s not forget the remakes of the Disney cartoons with real actors/CGI either. I have enjoyed all of these just as much as the originals. Disney can be quite dark but there are always some great messages in their movies and I love watching them.

So what do you think? Are remakes and sequels a good idea or not? Maybe they sometimes take things too far – how many sequels of The Fast and the Furious have we had now? But ultimately I am loving the nostalgia, and for die hard (excuse the pun) fans of the originals there can often never be too many.

I loved Sex and the City and enjoyed both films, despite the second one being panned by many and also to my surprise enjoyed And Just Like that, once I took it as a series in its own right and stopped comparing to Sex and the City. So if the writers are listening, please can we have another series?

The nineties were just yesterday weren’t they?  I can hardly believe it was 20 years ago!  Now I feel old!  Like my parents romanticise about the sixties, I tend to do the same with the nineties, having done most of my growing up in that decade.  Admittedly some of the trends are better off left there – heeled jelly shoes, Bon Bleu tracksuits, tamagotchi anyone?  But most of us will sit down and chill in front of an old episode of Friends.

Some of the things born in the nineties remain important to me today, one of which is Sex and the City.  In June this year, it was 20 years since we were first introduced to Carrie Bradshaw and Mr Big in the pilot episode.  While there is some debate about its relevance today, no one can deny that it was the first programme to show the importance of female friendships and women as sexually liberated.  I just love it for the fashion, Patricia Field was a genius!  If it hadn’t have been for Sex and the City, would I have ever been introduced to the beauty of Manolo Blahnik’s?  My husband probably would have preferred that, or certainly his wallet would have done!

Pop bands come and go and the early nineties saw me following Boyzone, followed by Spice Girls and Backstreet Boys and soloists such as Christina Aguilera and Britney Spears – who can forget Baby One More Time?  I actually found a video of my friends and I, when we attended CDUK (a Saturday morning chart show with Ant and Dec) in 1999 and saw Christina perform Genie in a Bottle – god did we all look young?

Anyway, my other great love of the nineties are the Welsh band, Stereophonics, formed in Cwmaman in 1992.  Their first album Word Gets Around was released in 1997 and since then they have gone from strength to strength.  One of my closest friends introduced them to me around the release of their second album, Performance and Cocktails in 1999 and the two of us regularly danced at parties to ‘The Bartender and the Thief’, despite disapproval from most of our other friends.  Ironically I have probably ended up a bigger fan than her, having seen them live over 10 times now and met them twice.  On my bucket list was to see them on their home turf and in June, I finally fulfilled this wish.

My husband and I travelled to Cardiff to see them at Cardiff City Stadium.  Their set opened with C’est la vie and closed, with Dakota which has somewhat become a regular closing song.  They were absolutely fantastic and never disappoint.  I love the fact that they play a range of songs from across all 10 of their studio albums.  I was stood dancing for most of the gig.  Sadly I’m not sure my husband had quite such a good time, given he doesn’t really share my passion for their music. 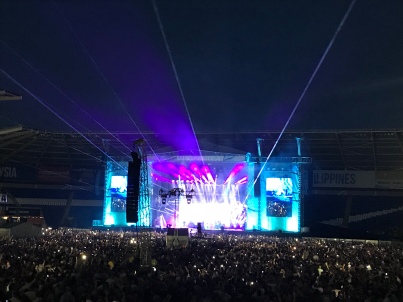 While in Cardiff, we thought we should make a weekend of it and do a bit of sightseeing.  We visited Cardiff Castle and it just so happened that the visit coincided with the Queen’s official birthday celebrations so we got to see the Royal Gun Salute. 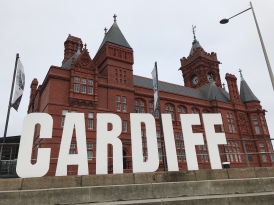 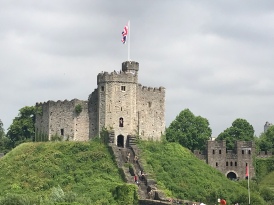 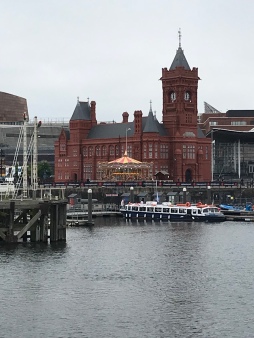 Returning to Paddington station, I was reminded of one of my childhood loves, Paddington Bear.  My Dad used to read me the stories and add his own bits in which was always fantastic. 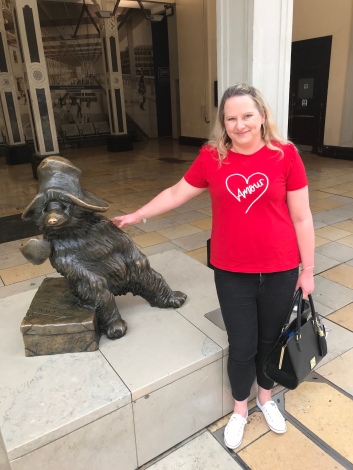 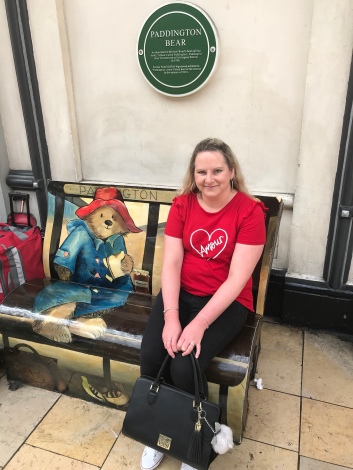 It’s great to reminise and Stereophonics have certainly survived the test of time.  It’s a shame that my face hasn’t faired so well over the years!  The nineties were great but I wouldn’t want to go back to a time of no broadband!  One day I would like to visit Stereophonics home village and I hope they are still going strong in another twenty years.