May Day Bank Holiday arrived and it was time for my girly holiday with one of my closest friends. The last time I went away with friends was in 2009 so this break was well overdue. Every girl needs quality time with her BFF.

After enjoying the full Spanish splendour of Paella and Sangria in a cute restaurant in the Olympic area, the casualty of the first evening was not me but my red suede sandals from M&S. Having only ever worn them to the party and not fully comprehending the length of the walk between the transport hubs and the restaurant; by the time I boarded the metro my toe was bleeding profusely – much to the shock of an innocent passenger. The shoes were not salvageable. I knew I shouldn’t have listened to my husband when he told me only to pack one pair of going out shoes! Of course this did give me an excuse to go shoe shopping – not that I really need one!

Love this mod style dress from M&S would you believe, as were the fated shoes!

The espadrille is of course Spain’s claim to fame in shoe terms. The shoe which originated in the Pyrenees dates back centuries with some suggesting they go as far back as the 14th century. The defining characteristic is the jute rope sole and the name originates from esparto, a tough, wiry Mediterranean grass used in making rope. Yves Saint Laurent popularised the wedge espadrille after meeting Castaner a Spanish manufacturer of espadrilles at a trade fair in Paris in 1970.

Whilst in Barcelona, I wasn’t about to miss the opportunity of visiting the first Castaner store which opened in 1994 and was aptly named Christina. Although the Castaner brand originated back in 1927, it only really began to flourish as fashion footwear in the 60’s when colour was added to the shoe. The meeting with Yves Saint Laurent no doubt also helped bring the brand to the forefront of fashion. The Castaner family still heads the company and its Mediterranean roots remain at its core. I purchased a stunning pair of navy wedge espadrilles. 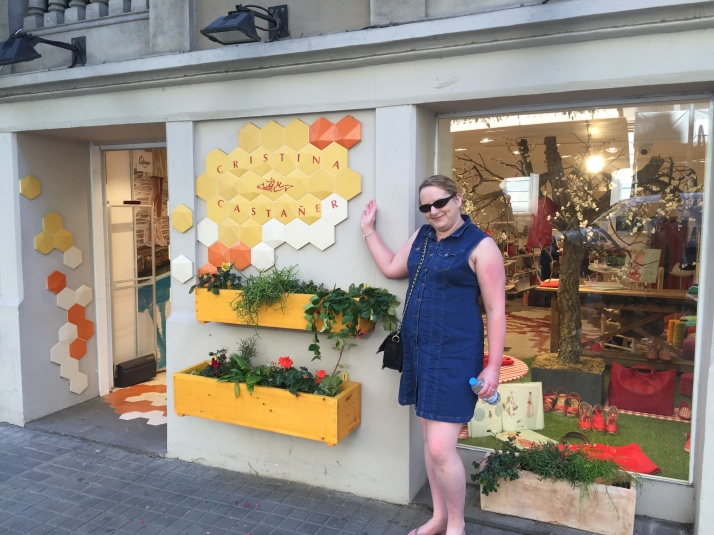 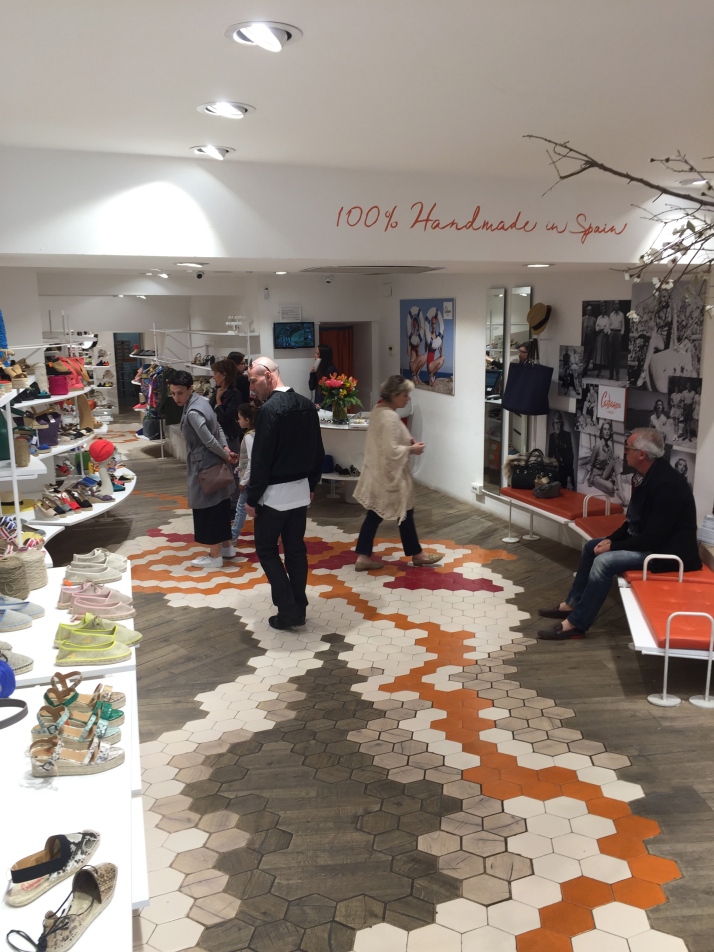 Naturally I went to Barcelona for reasons other than footwear but couldn’t visit without experiencing a true Spanish brand whose craftsmanship has stood the test of time.

We only had two full days in the city and like many other European cities; it is a city of contrasts with a vast amount to see. We joined the hop on, hop off open top tourist bus for the first day in order to get a general feel for all the city has to offer.

The Barrio Gotico gothic quarter is steeped in history and was built around an old Roman town. It is here that the wonders of medieval architecture can be enjoyed, not least with La Catedral. Sadly we couldn’t find the cloisters where geese roam free as it appeared to be closed off for maintenance. 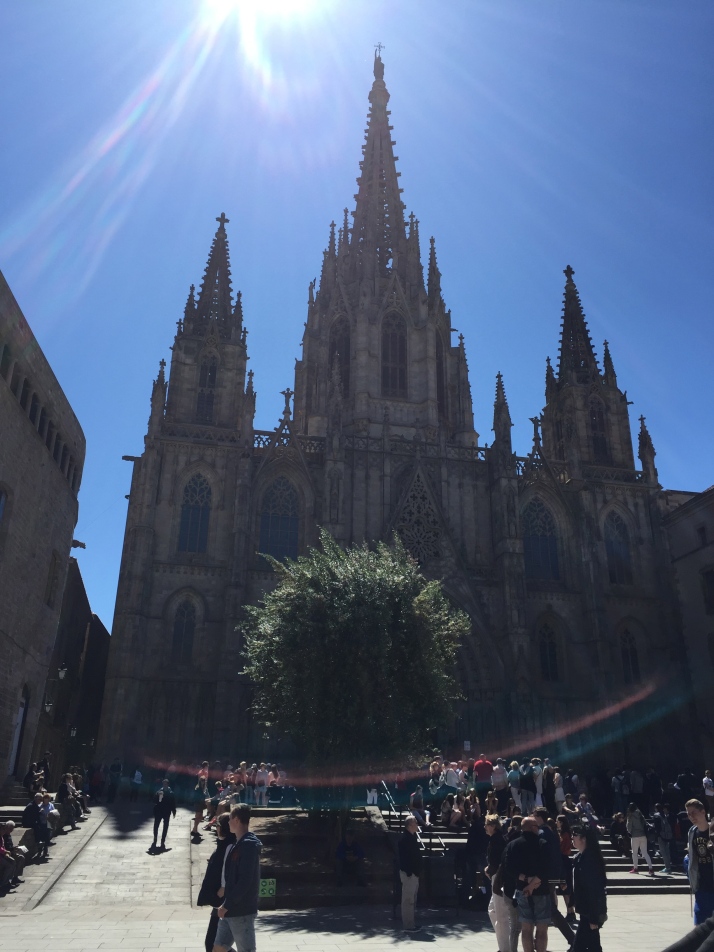 That evening having already sampled the paella – we opted for another Spanish culinary favourite; tapas.

The second day consisted of a jam packed itinerary. We wandered along Las Ramblas – the most famous street in Barcelona. The street stretches from Plaza Catalunya to Port Vell Harbour and the Christopher Columbus statue. The trees that line the pedestrianised part of the street provide a canopy from the Mediterranean sun whilst you explore the stalls selling everything from souvenirs to flowers to art work and take in the living statues.

A visit to La Sargarda Famillia was a must. The church designed by Gaudi is still being built today but the elegance and grandeur of the place can not be lost on even those most lacking in architectural appreciation. The foundation stone was laid in 1882 with Gaudi becoming involved a year later and current estimates suggest it may be complete in 2026 to celebrate 100 years since the death of Gaudi. The project is funded by tickets sold for the attraction and private donations. The sunlight streams through the many beautiful stained glass windows and bounces around the ornate web of angled columns thus creating a similar effect as when light seeps through a canopy of trees.  Lots of Gaudi’s work drew inspiration from nature. 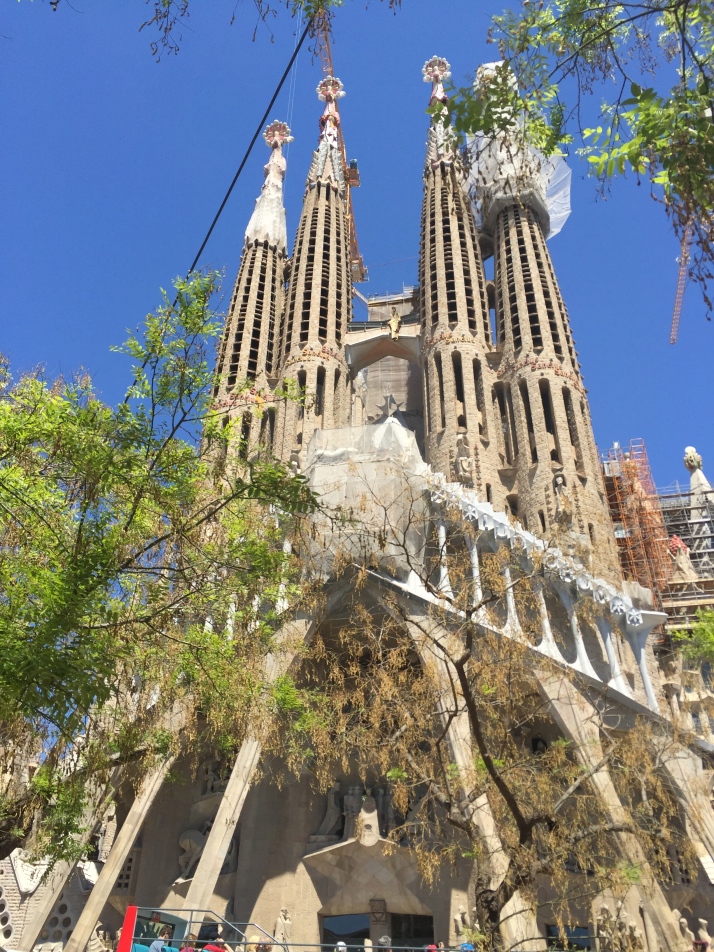 The next stop was Park Guell – another piece of lasting Gaudi heritage and a UNESCO World Heritage Site since 2004. Originally this was bought by a count to become an exclusive village of houses with landscaped gardens and he hired Gaudi but commercially it flopped and in 1922 the city bought the area to make it a public park which now gets an estimated 4 million visitors a year. It is a truly enchanting place. There are beautiful mosaic tiled areas and gate houses that resemble gingerbread houses. A much photographed mosaic lizard is a defining attraction of the park.

Finally we rested our tired legs and got the cable car up Mountjuic, thought to once have been a pre Roman settlement, for some beautiful views of the entire city.

Our final night was spent in Placa Reial, a pretty square just off of Las Ramblas with many restaurants and night spots set around a central fountain which is lit by unusual lamp posts which are Gaudi’s first known works in the city. We were entertained by the original Spanish art of Flamenco. Flamenco was first mentioned in literature in 1774. A flamenco show is extremely passionate and quite exciting to watch; some what of an assault on the senses. There is a guitar player and the dancers wear shoes like tap shoes. The women are dressed in beautiful dresses.

Our final morning was passed with breakfast on the golden sands of Barcelona’s coast. It is easy to think of Barcelona as a city break and forget that it is also on the coast; giving you the best of both worlds.  I highly recommend Barcelona for a city break with a difference. 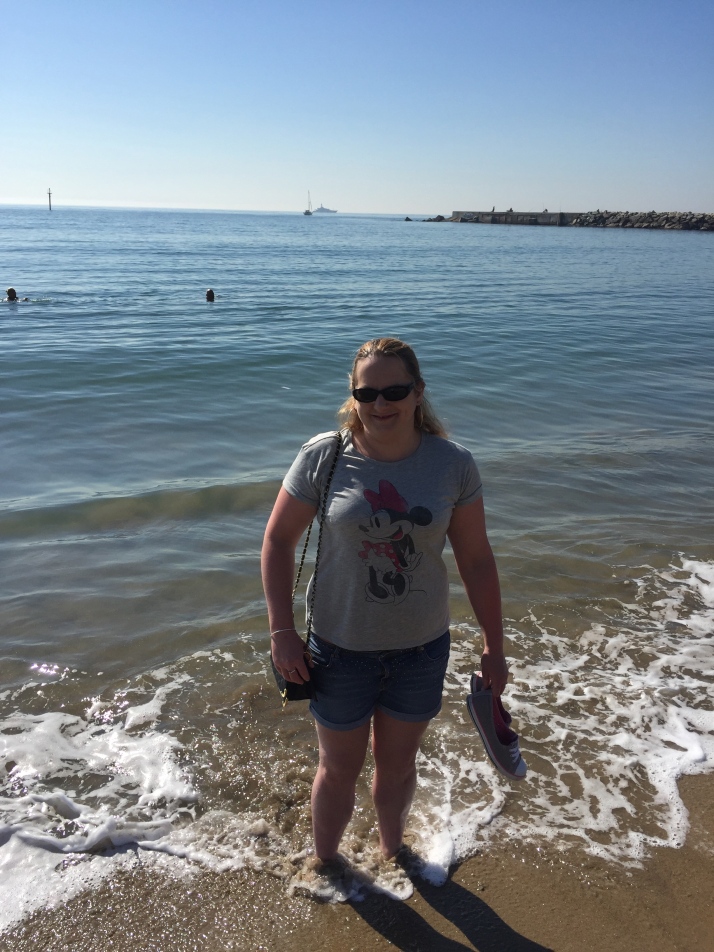