The sun was shining on a fabulous June day and there was a sweet smell of lavender in the air as the guests waited in The Gardens, Yalding for the wedding to begin.  The Gardens opened in 2016 as an exclusive wedding venue.  The 12.5 acre site is divided into 16 distinct areas, representing garden design through the ages.  There are also extensive orchards, in keeping with Kent’s long history as the garden of England.  Five bridesmaids in cornflower blue and a beautiful flower girl sprinkling rose petals along the grass aisle, signified the arrival of the bride.  She looked radiant in a classic style, satin dress with pretty lace bodice, on the arm of her proud father, who escorted her to the round pagoda where her beaming fiance awaited her.

The service was lovely with one particularly entertaining poem by Taylor Mali “How falling in love is like owning a dog”.  Once pronounced man and wife, the happy couple were showered in confetti from pretty die cut cones and then they led the way to the barn, where Pimms and bucks fizz were on offer.  While the adults caught up with each other and photos were taken, the children were amused by various traditional lawn games, including croquet. 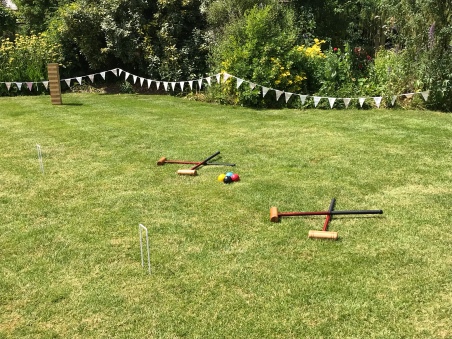 Soon it was time to be seated in the two interlinked tipis which are connected to the barn, for the wedding breakfast.  The sides of the tipis were rolled up, bringing the outside in and the flower/garden theme continued with the tables each named after a flower with said flower as a centre piece.  Favours were seeds of the flower your table was named after which I thought was a wonderfully unique idea.

The cake was also in keeping with the theme and made by the bride and groom themselves.  It was four tiers, topped with fondant roses and was sat on a section of tree trunk.

Rather than just the usual guest book, they had also provided a camera and printer so that guests could put a picture of themselves in with their message.

We had to make an early exit, after the speeches sadly, as unbelievably we had been invited to two weddings on the same day!  This does have a fashion bonus however as had they both been on separate days, I would have had to buy two outfits and therefore I could justify spending a little more on a dress and was able to treat myself to this amazing Ted Baker number that I had my eye on, totally guilt free!  I accessorised with silver sandals from Dune and a silver clutch. 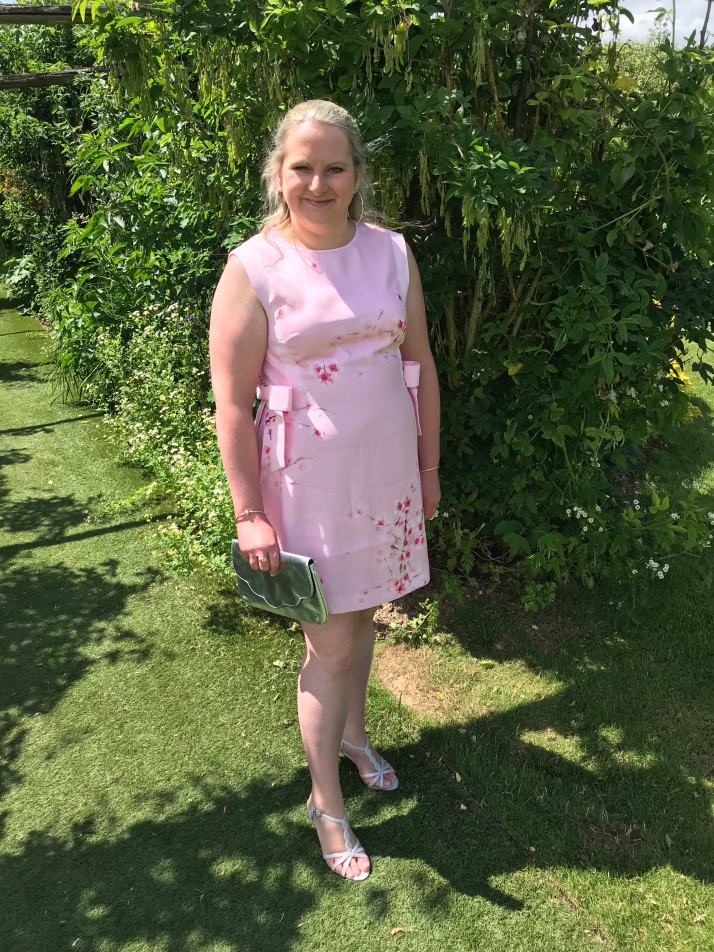 The second wedding was that of one of my best friends so I was gutted to have missed the main part of the day but pleased to be able to come and celebrate with them in the evening.

The theme of her wedding was festivals.  Each of the tables had been named after classic albums, with the record itself serving as the table identifier.  The individual name cards were designed as festival tickets.  Favours were cleverly fitting with the theme and the couple’s married name – a travel coffee/tea cup.

The bride looked even more stunning than I could have imagined in a vintage style lace dress with low back and cute buttons, leading to the beautiful train.  She had accessorised with a long gold and pearl necklace down the back – very Chanel.  The bridesmaids wore long grey, embellished dresses that were 1920s inspired.  The flowers in hers and the bridesmaid’s hair were fake but looked amazingly realistic. 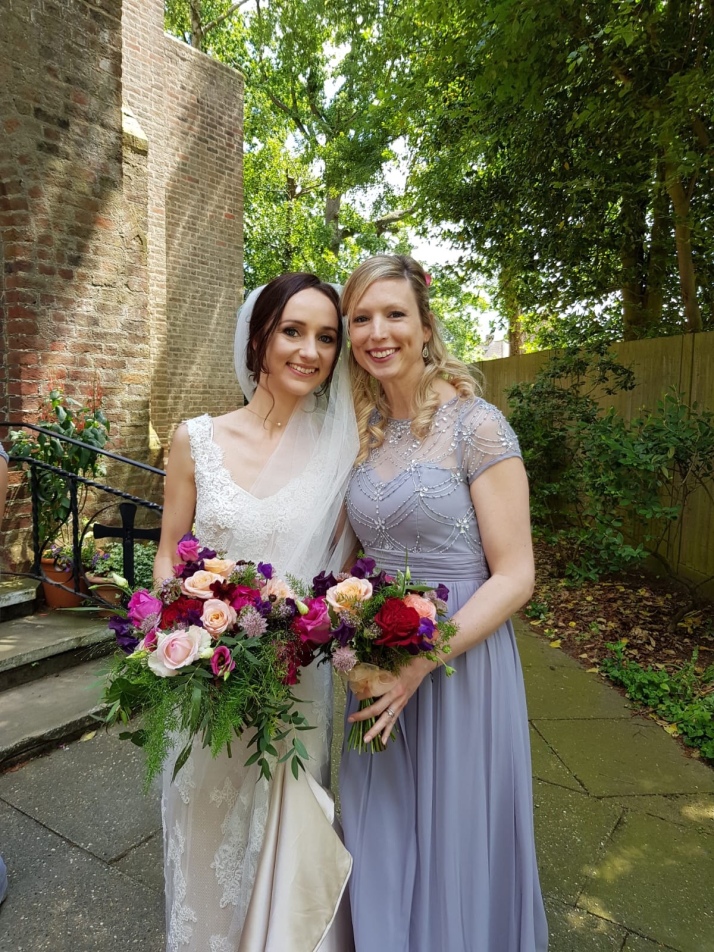 We arrived in time for the cutting of the cake.  The cake was all marzipan with a lego bride and groom.

The first dance then followed; a classic Dire Straits number, Romeo and Juliet.  It was beautiful to see them dancing and having fun together as man and wife.

They had a fab dress up box and polaroid camera, so guests could all do pictures and stick them in the guest book, similar to the idea at the earlier wedding.

Two beautiful couples and two beautiful weddings, I wish them both, all the happiness in the world.  I will leave you with a quote by Mignon McLaughlin that I think sums up marriage perfectly: “A successful marriage requires falling in love many times, always with the same person”.