The city of Paris has always been synonymous with romantic short breaks but next time you want a couples get away, why not consider Verona? 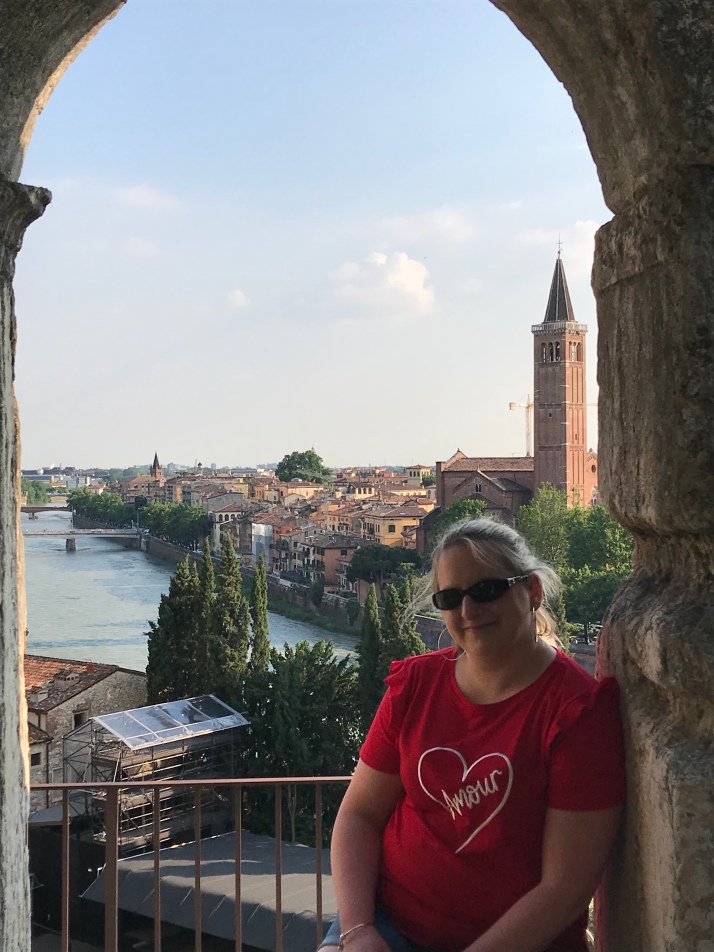 To the North of Italy, Verona sits on the Adige River somewhere between Milan and Venice.  Those who paid attention in English literature, will know that Verona is the setting for Shakespeare’s Romeo and Juliet.  It is no doubt on the back of this play that Verona became a tourist magnet, further aided by the successful 2010 film Letters to Juliet, staring Amanda Seyfried.  Both certainly played a part in my selection of a city to celebrate our fourth wedding anniversary.

The flight was a swift two hours from Gatwick and a bus takes you from the airport to the city’s central station for a bargain €6 per person.  We stayed four nights at Hotel Giulietta e Romeo, which of course I picked out based on the name, but as luck would have it, it did turn out to be a wise choice. Rooms at the hotel were clean and staff friendly and the breakfast was a good continental offering.  Located a mere stones throw from the Arena, it couldn’t have been better located.  Watch out for gladiators wanting their picture with you outside the arena and don’t bother paying to go in as the best views are from the outside being that the inside is now a modern concert venue. 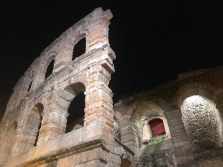 The main attraction of the city is Juliet’s house and balcony.  As you walk into the courtyard entrance, the walls are covered with names and messages, to the point that you can’t distinguish one from the next.  The focus of the courtyard is a brass statue of Juliet.  Legend has it that rubbing her right breast will bring you luck in love.  The queue to go up on the balcony was far less than I thought but that could have been in part as it was a weekday and perhaps also the admission charge to the house puts some visitors off.  We added to the numerous padlocks bearing initials in the courtyard.  Visitors can write to Juliet either by the traditional method of pen and paper or by email.  Just like in the film, Juliet’s secretaries do actually reply.  If you are still hungry for more monuments to the great play, head to the tomb of Juliet.  I warn you though, there really is little to see aside from a quote from the play and an empty stone tomb. 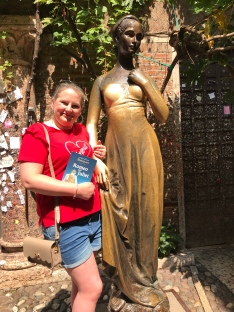 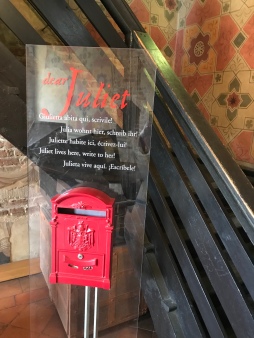 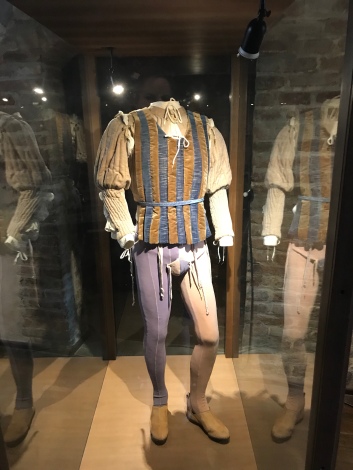 Verona has much more to offer than this fictional history, but before exploring that, we soaked up the Italian lifestyle and sunshine, stopping for an Aperol Spritz and some pizza in one of the many cafes that border Piazza Erbe.  This is a great square to relax and watch the Italian hustle and bustle.  A market takes up much of the centre square and a wonderful array of colours and smells tease your senses, from beautifully decorated opera masks to fresh fruit and pizzas.  For a bird’s eye view, head up the torre dei lamberti.  To get to the tower you will pass under an arch from which a whale rib has been suspended since the early 1700s.  No one knows how it got there and the myth is that it will fall on the first truthful person who walks beneath it.  It might not have fallen on me, but as I walked through the arch, my wedge shoes caused me to stumble and fall spectacularly!  Style over function once again! 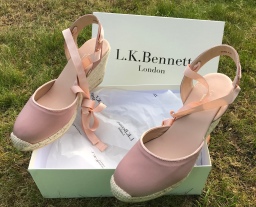 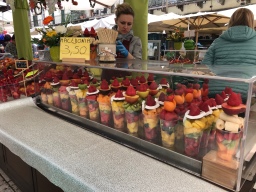 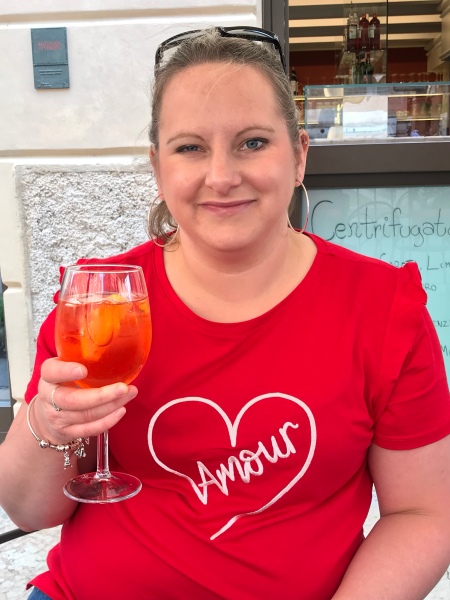 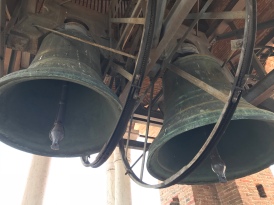 Some beautiful bridges take you across the River Adige, the most beautiful being part of the Castelvecchio, a wonderful example of gothic architecture.  A walk over Ponte Pietra and a trip up on the cable car to the Castel San Pietro is worth it, just for the view which was just as well as the castle itself, was closed for renovation when we went.  While we were up there, the weather took a turn for the worst and we took shelter in Re Teodorico, a bar half way down the hillside.  Thank goodness it was there, as when the rain came down, it really came down.  It was like someone had turned a tap on full blast.  There was lightning as well as thunder that shook the window panes.  It even started to rain in the bar!  I was only really worried about my LK Bennett satin espadrilles, so thankfully it did stop after about an hour and we made our way back down to the town, with me tip toeing around puddles.  Also on this side of the river is the Roman theatre and archaeological museum.  The theatre is quite a marvel, set in the hillside and more great views of the city below are on offer.  The archaeological museum on the other hand was not for us – you’ve seen one pot, you’ve seen them all! 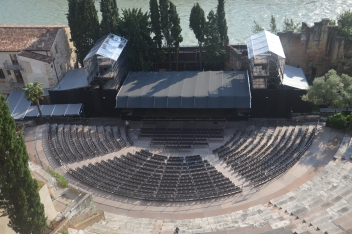 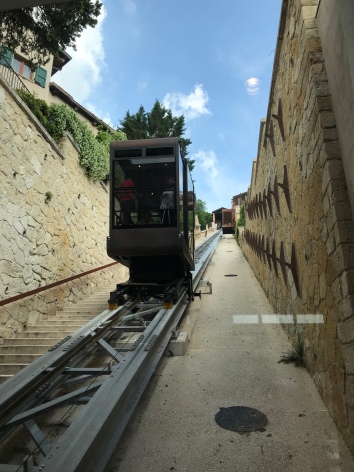 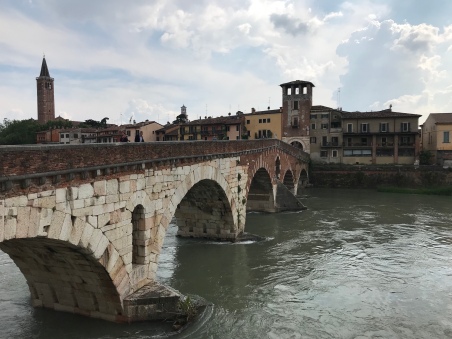 Verona is ideally situated for a trip out to the Italian lakes.  We visited Lake Garda and went on a terrifying boat ride across to Sirmione.  Sirmione used to be a peninsula but is now an island.  You are welcomed to the island by a beautiful medieval castle that overlooks the lake.  Here we sampled the best gelato I have ever eaten.  It was so creamy and sweet and the choice of flavours was monumental.  I went for coffee, chocolate and tirimusi. 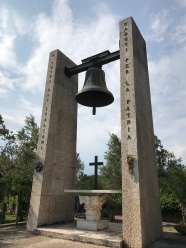 In order to really understand Italy’s love affair with food, we enrolled on a four-hour cooking class while in the city.  Here we learnt the art of tirimusi and how to make tagliatelle by a very talented chef who has written a fair few cook books – sadly they have yet to be translated.  Following our efforts, we sat and ate the food we had made, washed down with complementary wine.

No visit to any city is complete without visiting a couple of churches and Verona has plenty,  I would highly recommend Duomo Cattedrale, a vision of white marble and Church Santa Anastasia, a thirteenth century church, which while nothing special outside, has a stunning interior.

Before leaving the city, I of course made time to shop, and was happy to discover Mauro Leone – an Italian homemade footwear chain, which I first came across in Milan last year.  Much to my husband’s frustration, I came away with two beautiful pairs of shoes to add to my expanding collection. 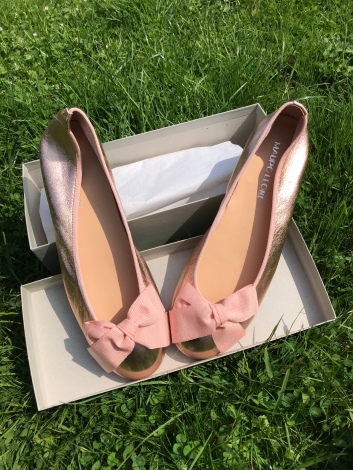 Italy is a country made for me – sunny, home of beautiful footwear, the origin of the Fiat 500 and the best food in the world, not to mention the home of the aperitif – what’s not to love?  Having done Rome, Milan and now Verona, I am hoping to persuade my husband to come on further explorations of the country despite his insistence at having seen enough.  Some of Italian’s passion did rub off on him in terms of my anniversary gifts.  Flowers and fruit are the traditional gifts for four years of marriage.  He bought me a beautiful flower charm in Pandora, along with a heart engraved with ‘I love Italia’ and a new bracelet.  During our walk around the city he picked me a wild red rose and later at dinner in Bistrot Mamma Mia in the Piazza Bra, he bought me a rose from a seller touting their business around all the local establishments.

The best meal we had by far was on our final night at L’Orologio on Corso Porta Nuova.  The service and the food was second to none, I particularly enjoyed my favourite starter, caprese salad. 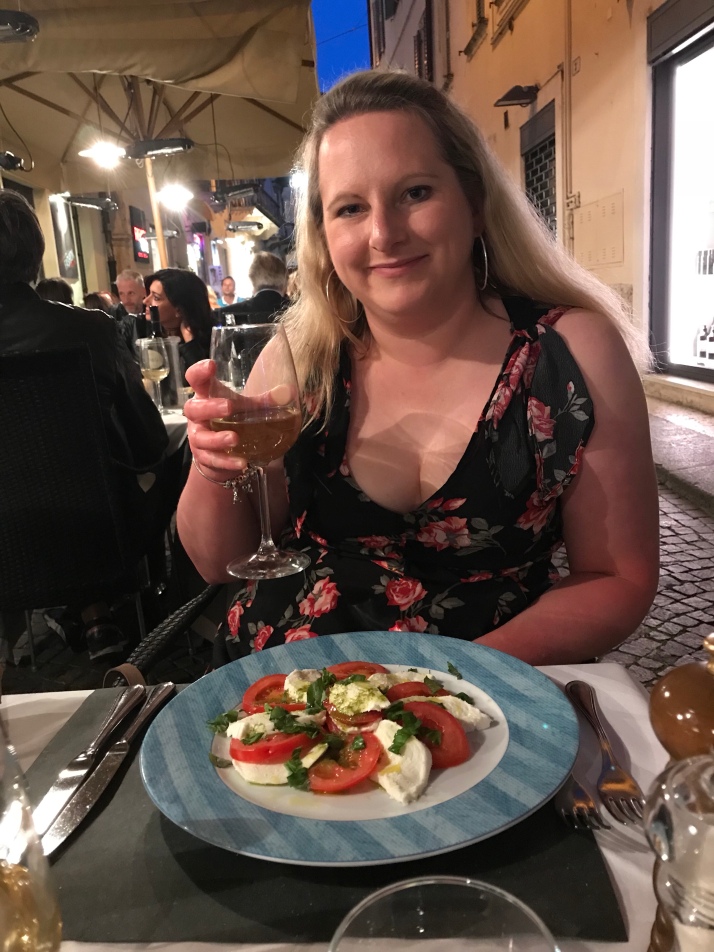 One of the lesser visited cities of Italy, Verona is not one to be missed – add it to your bucket list now!  If it’s romance you are looking for, this city has an abundance of it, given it was the setting for the greatest love story of all time, and no one can deny the passion Italians have for style and of course for food, as our guide said “an Italian knows good food”.