It was a sunny September day when we arrived at Easton Grange for the marriage of my school friend Cathleen Kobylinski to Alan Cowie.  I’m not sure whether the choice of month was intentional but Polish tradition (Cat’s heritage) dictates that months containing the letter ‘r’ will bring good luck to the marriage.

The venue was a working farm up to a few years ago when the farm moved to a different site and in 2012 the buildings were renovated to create this idyllic private venue. The refurbishment has tried to pay homage to the original use of the buildings and because part of the barn which is now the bar was used as a dairy – there are many cow pictures, which unintentionally added to the word play the couple were going with. Each invitation was decorated with a cow and a cat linking tails and this theme was followed through on the order of service and place cards.

For the day I wore a pale pink and cream A-line dress from Oasis accessorized with gold sandals which were purchased some fifteen years ago in River Island and were probably the first pair of shoes which I really splashed out on.  A goldy cream satin clutch finished off the outfit. 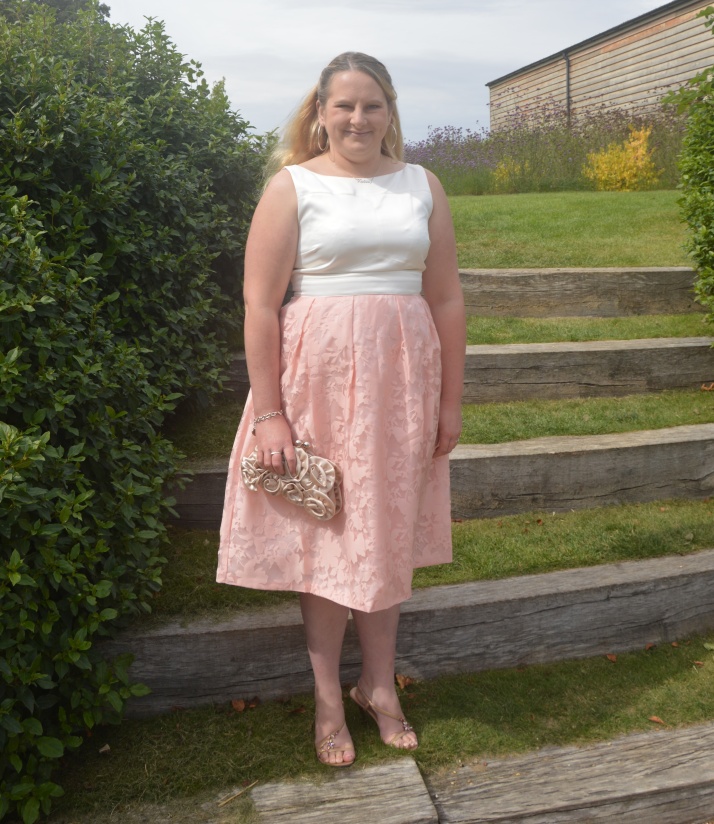 The groom fidgeted nervously as we all sat and awaited arrival of the bride who was fashionably late as tradition dictates. The aisle between the chairs had been scattered with petals in pink and orange which were the colour themes with one bridesmaid in each of the colours. She glided in on the arm of her father, looking beyond stunning in a white lace number with delicate diamanté straps and a corset back which was laced with peach ribbon to match the grooms peach tie. The peach was a good choice as that can be seen as a combination of pink and orange so tied the two colours together.  We also caught a glimpse of her gorgeous blue shoes.

The service was non- religious but was beautiful. I particularly liked the two readings that were picked ‘The Promise’ by Eileen Rafter and ‘I Like You’ by Sandol Stoddard.

We showered them in confetti and had all the obligatory pictures just before the sun was replaced with drizzle. Reception drinks were Kir Royale which I adore and the canapés were delicious – especially the mini fish and chips. 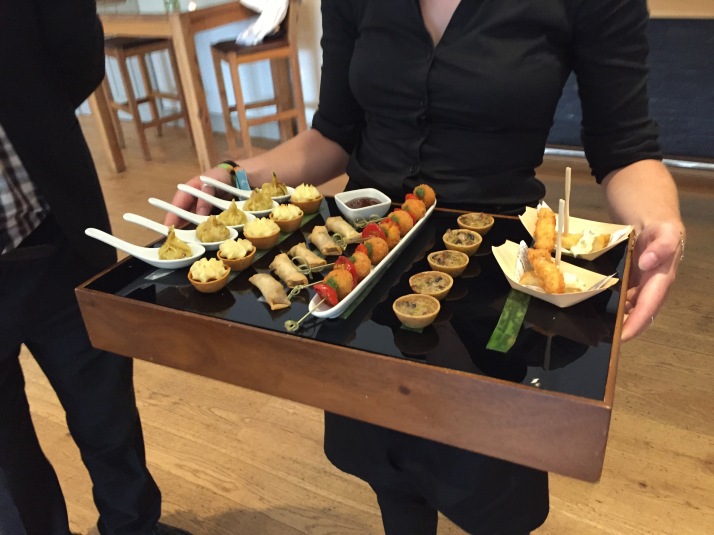 The table plan followed a Rugby theme as well as entwining the couple’s backgrounds – English and Australian. Our seats were swiftly located and we had a beautiful favour of traditional polish gingerbread.  The centre pieces on the tables included eucalyptus to represent her Australian birth country, roses to represent England and thistle to represent Alan’s Scottish roots.  From the ceiling pink, orange and white paper lanterns had been suspended. 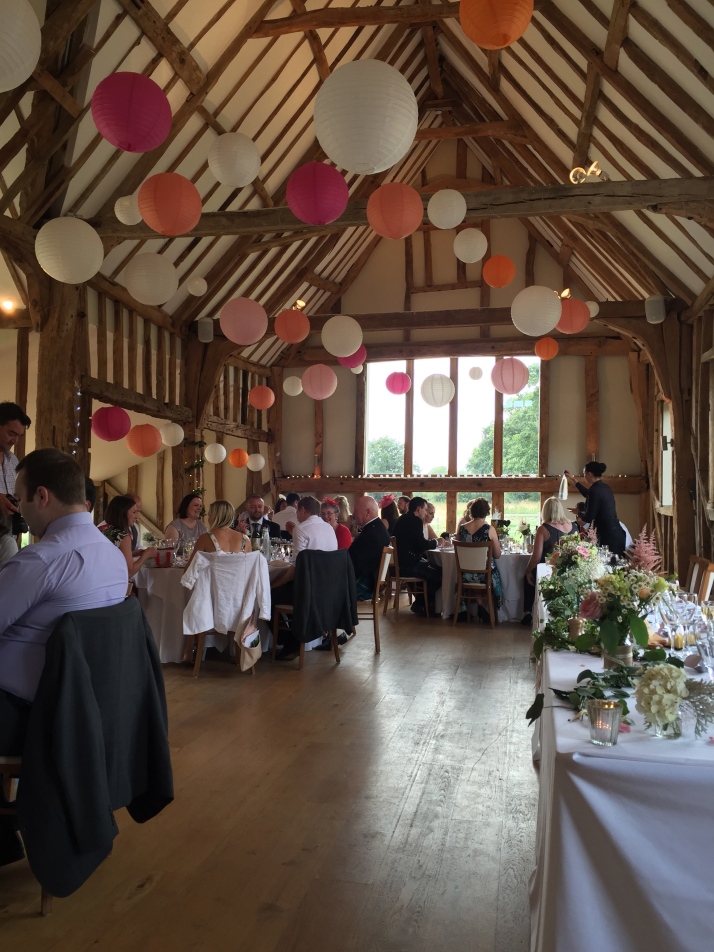 Speeches were given with the bride’s father making the toast in Polish and a very insightful and humorous speech from the best man. Dinner was then served. I must comment on the puddings which were amazing. There were 3 mini puddings – cheesecake, chocolate brownie and fruit with shortbread.

Feeling suitably fall all the guests retired to the bar area where the bride and groom had been very generous in giving a free bar. It was a wonderful chance for me to catch up with my oldest school friend who attended too and now lives in Manchester – I could have talked all night.

Evening food was served but to be honest I had no appetite left. Instead of the usual visitors book to sign they had opted for a large Mr and Mrs in black which we wrote well wishes on in a metallic pen.

The groom’s sister was responsible for the wonderful wedding cake – mainly cupcakes with one round cake topped with a peach flower. The cake was cut and then it was time for the first dance. I always await this point as I think it is so interesting to find out what song couples feel best represents them. On this occasion, ‘Your my best friend’ by Queen was chosen.

The party was then officially started. I liked the fact that they had a live band which is somewhat unusual nowadays. The band were called Shine On and were very good, performing a variety of indie and pop music.  Guests danced into the night and there was added fun with complementary glow sticks.

I’m so pleased that two lovely people have found each other.  The wedding was a beautiful day and I wish them a long and happy marriage. 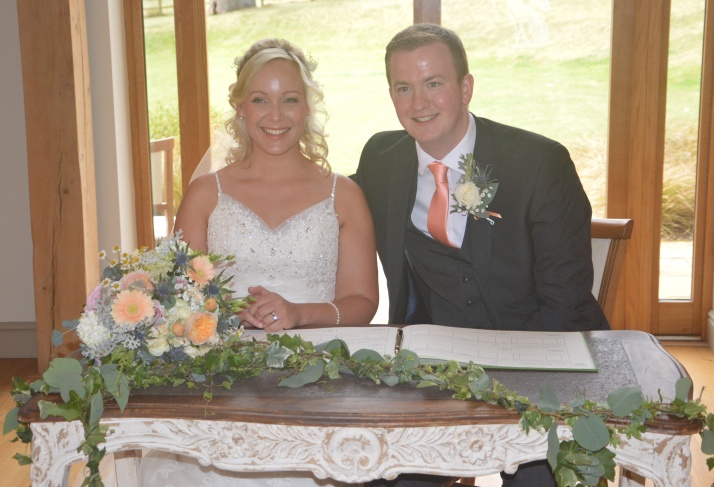