Back when the New Year dawned my husband and I decided that 2015 would be the year we moved. I was personally very happy in the house we had; a 1897 2 bed terrace on the aptly named road of Station Road, but he worried that if we didn’t move now then we might lose our opportunity. We began looking to get an idea of what was out there in our budget and were repeatedly disappointed when our offers were rejected as our house wasn’t on the market; so we went through the process sprucing up the house before getting valuations and photos taken.

Now everyone had told me how stressful moving can be and how it’s second only to divorce but initially our experience totally contradicted that. The day before our property was even released online we had a viewing and an offer for the asking price from a landlord. Then not more than a week or so later, we found what we thought was our perfect house; a 1930’s 3 bedroom semi on the very desirable road in Rainham, with a big garden but albeit no garage. We had to offer £10,000 over the asking price to secure it but that seems to be the way of things at the moment. So this was March and we were feeling pretty smug having sold our house and found our dream home inside of a month. I can report this was only the beginning and little did we know but much horror was to follow.

Come summer, the people in the house we were purchasing were still no nearer to finding a property for themselves and it began to dawn on us that these people weren’t really serious about moving so we decided that we should start to look again. We viewed numerous houses but none met our requirements or felt right and a few that did, we were outbid on. One of the worst properties we saw was a so called chalet bungalow that was in fact a bungalow with a loft conversion. As we took in the strange elevation of the garden the owner commented that she hoped she had picked up all the dogs mess from the lawn! The living room came complete with her slob of an ex-husband watching reruns of formula one! Definitely a firm no. I was beginning to doubt if there was the perfect house for us out there, perhaps we were looking for something that didn’t exist, and we were both of the opinion that we would just go along with things until we either lost our buyer or the sellers pulled out of theirs.

I can’t explain why but one day out of the blue, I found myself back on the Right Move site and there it was; a house even more perfect than the original one we had found that actually ticked all our boxes. It was a 1908 built, Victorian/Edwardian style house, detached, with 3 bedrooms, a huge garden and a garage. We got a viewing as soon as we could. As soon as we went in, it just felt right, I could see us living there and knew I wanted it. So we went in with an offer £10,000 over the asking price but still only the same offer as we had put on the semi and to our amazement it was accepted. The couple there were older and one was moving to Wales and the other a smaller property in the area.

Would you believe that as soon as we pulled out of the semi – it was back on the market for some £20,000 more and I have since heard that they have moved so maybe it was a ploy all along to get more money – who knows, but they did us a favour in the end as it turned out.

The problems didn’t stop there however. Our buyer was moving incredibly slow and it turned out struggling to get his buy to let mortgage. The estate agents advised us to go back on the market and assured us we would get another buyer in no time. Unfortunately they didn’t bother to inform the agents we were purchasing from and when they saw our house back online, the vendors panicked and put theirs back on too. We got another buyer that same day and she offered the full new asking price (£10,000 more than originally) but the agent would hear nothing of it and said viewings were already booked on our dream home. I was distraught. I don’t know how I got through work that day. I was in tears at one point, so I wrote a letter begging the vendors to reconsider and we put it through their door. It was an evening of nail biting but thankfully the following morning the agents rang to say the vendors had been in with our letter and they didn’t want to sell to anyone else.

Happy days you would think, but there was one final nasty surprise for us. The new buyer of ours pulled out about a week later. This time we were in direct contact with the vendors however and informed them straight away. They said they didn’t want to overreact like last time and would see how things went and they then rang and said they themselves would like to view our house. They offered straight away, albeit £2000 less than what the woman had offered but we were more than happy to accept as now it was a private sale and we would have no estate agents fees to pay. Would you believe both the landlord and the woman tried to win it back though – not that we were stupid enough to go there.

A moving date was set for early November and the packing began in earnest with much help from both our parents. It’s hard to believe just how much stuff we had between us and part of the process was going through and chucking stuff out. It’s just so hard when you find something you have kept for 20 years and somehow it seems wrong to throw it away when you have had it so long but the time had come to be ruthless. I still felt it could all fall through at any time and still wasn’t convinced even when we exchanged.

Moving day came around quickly and we still had much to do when we got the call saying we had completed at around 10am. Now it really was happening – I finally dared to believe it. We had decided not to use removal firms, partly due to cost but mainly as I didn’t want strangers knocking my possessions about. Dad hired a van and we were fortunate enough to have lots of family and friends muck in to help. Inevitably though it took as longer than the guy moving out of our new home; after all my large collection of shoes took time to pack up! He not only had removals but his wife had gone to Wales the day before so there was far less stuff to move.   He then turned up at Station Road and had invited a Talk Talk engineer to fit his broadband. This added to the stress of rushing to get out. Then I came downstairs to find a strange woman in our dining room, who later turned out to be the new owners cleaner. That was it; I just lost it – it felt like our home was being invaded, even though it technically wasn’t ours anymore. My husband sent them away to leave us in peace and eventually the lorry was loaded. I didn’t even get a chance to say my good buys to the house as the new owner was knocking on the door. I realise I acted irrationally and hope that the new owner doesn’t hold it against me but I think all my emotions just suddenly flowed over.

As we drove off I felt a great deal of sadness. All my recent memories had been made in that house. It was the first house I had lived in other than the one I grew up in. We arrived at the new house and had the obligatory picture with the sold sign. 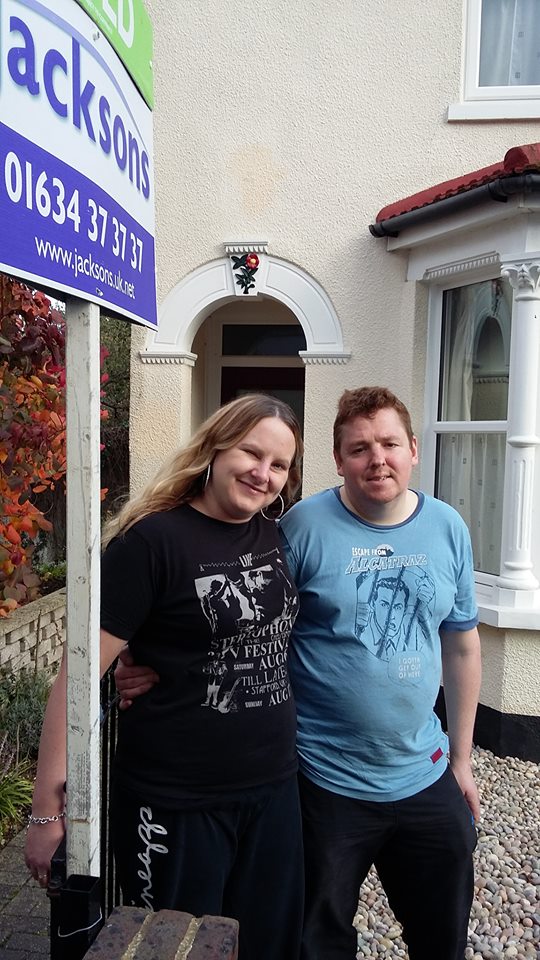 We set about the important task of finding the kettle and then broke for some lunch before unloading the van. We were still unloading as darkness fell. The last items to come in were the sofas and they were the most challenging as they only just fitted through the front door.

We really had done it. We all went out for a meal to celebrate. The first night was strange and felt like staying in a hotel. Although the house was in reasonable condition it wasn’t as good as we had thought it was when we viewed it. The décor was also not to our taste. I know many of you will disagree with me as now apparently grey is in fashion but we found the abundance of grey walls rather depressing; as my husband aptly put it, it was like living in a black and white movie. Suddenly I think we both realised the magnitude of what we had done. We had gone from a house where everything was how we wanted it to a new project and it felt just a little overwhelming listing out all the changes we wanted to make.

Without a doubt it was the right decision to move and I will get used to it. The possibilities with this house are vast and I look forward to getting stuck into the projects. Check back to look at my renovations.

In conclusion I now realise why people say moving is stressful – I don’t know about it only being second to divorce but I know there were times when we were so stressed, we took it out on each other and we could have very easily have ended up experiencing both. Thankfully we are now out the other side and whilst I advise everyone to go for their dream home, I certainly will never be moving again, they can take me out of there in my box!