Some people celebrate their first wedding anniversary with a posh meal, others with a holiday – we chose to complete the London 2015 Moonwalk! Our team of three; my husband, his sister and I completed the 26.2 mile walk around London overnight on 16th/17th May to raise money for breast cancer through the charity Walk the Walk.

The first London moonwalk took place in 1998 but its founder Nina Barough began the idea with a New York power walk in decorated bras back in 1996. All participants raise money for Walk the Walk which then grants money to different charities to help the fight against breast cancer. Our team raised a whopping £1800 which feels like a fabulous achievement, with me personally raising just over £730. My company are good enough to match the amount I raised and give it to their charity of choice which is CLIC Sargent this year; so I will also be helping children and young people with cancer. Anyone who has ever raised money for any charity will understand just how difficult it can be to get money out of people. You have to become a thorn in people’s side. Other than simply asking for sponsorship, I made cupcakes which my husband sold at work to raise money.

Each year the Moon walk has a theme around which bras should be decorated. This year’s theme was ‘Night at the Movies’. There were some fantastic takes on the theme including people dressed as popcorn sellers complete with trays of popcorn attached to their bras and those with film reels on theirs. As a team we decided to go with Grease and my sister in law and I wore pink ladies jackets, as well as dying our bras pink and decorating with Grease badges. My husband wore a T Birds jacket and gelled his hair like John Travolta. It appeared the pink ladies was one of the most common ideas, however I don’t think I saw any other T Birds and it was funny at one point when my husband and I were walking arm in arm willing each other on and a volunteer cycled past and said “Oh look, there’s Danny and Sandy!” 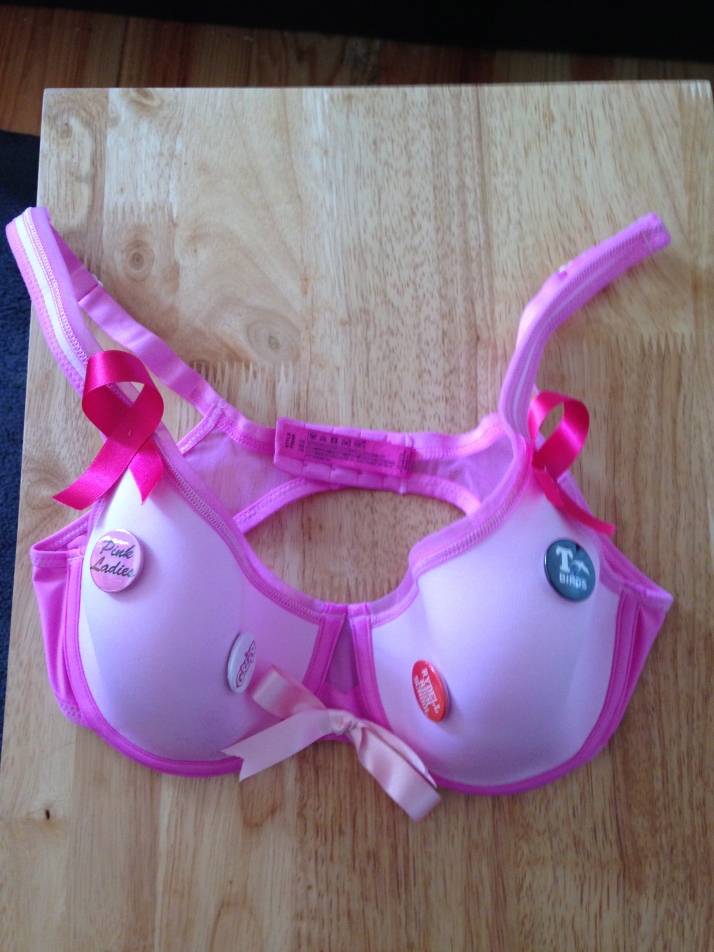 I don’t think any of us were prepared for just how tough 26.2 miles pounding the pavements of London would be, especially overnight. We had all put in hours of training although admittedly my sister in law was far more dedicated than my husband and I – our longest training walk was just over 17 miles. Walking during the day however is very different to doing it when your body is battling the natural urge to sleep. The first couple of miles passed relatively quickly despite the crowds (over 15000 people took part). There was lots of encouragement on the way round and it was interesting doing a tour of London’s tourist spots when much of it is deserted. Walking past my office at 1am on a Sunday morning is certainly something I won’t ever be doing again! About mile 18 it really got tough though and we all felt like we had hit a wall. There was some serious doubt amongst us as to whether we could finish. The thought of the money we had raised though, coupled with the terrible suffering those with breast cancer endure spurred us on through and we eventually completed it in about 9 ½ hours excluding lengthy toilet queuing time!

As the medal was put round our necks – it all felt worth it. I had previously done the half moonwalk in 2013, see previous blog and was determined to prove to myself that I could do the whole one. I don’t think any of us will be rushing to sign up again but I would recommend anyone to do it at least once – it certainly is an experience and it really does make a difference.

As many of you would naturally assume, most of Sunday (our anniversary) was spent sleeping and recovering and instead of a celebratory dinner out, my husband and I enjoyed Prosecco and a Chinese take away. His gift to me for our anniversary was a photobook of our honeymoon and mine to him was some Formula One books and a message in a bottle.

My friend suggested I reward my efforts on the walk with a pedicure and a pair of Louboutin’s! As a shoe addict I really should pay more attention to my feet so I took her advice and went to Amazing Space in Rochester the following weekend. An hour’s signature pedicure was £32 and included a hard skin removal, soak, exfoliating scrub, massage, cuticle and nail tidy and a polish all whilst sitting in a body massage chair with soothing music in the background. It was pure indulgence. Unfortunately my pocket can’t stretch to Louboutin’s but I did feel a new pair of shoes may be in order so bought a couple in New Look which I will feature on future blogs.

Anyone who has done the correct training can do the Moonwalk so why not sign up for 2016 and challenge yourself – people with breast cancer will be thanking you.