The end of March/beginning of April saw Cinderella fever as a new Disney movie, based on the classic fairytale and starring Lily James was released. The first written version of the story was published in Naples in 1634. 1904 saw it debut in London as a pantomime and the first Disney animation was released in 1950. Over the years, Cinderella has become the most loved of the Disney princesses so it is no surprise that Disney decided to issue a remake. This version despite being Disney was filmed in the UK.

A completely free – (yes you read that correctly) exhibition of the costumes/props from the new Disney movie was held in Leicester Square for a few weeks. Tickets were hard to come by but I managed to book some for the Saturday over Easter. Unfortunately I was unable to go due to my eye problem reoccurring and was gutted. My own prince attempted to make up for it though by making me an afternoon tea at home and bringing home a Costa latte for me. It seemed like I was destined not to go to the ball but as a last ditch attempt I queued one night after work to try and see it. I queued for two hours but it was well worth it – seems I was allowed to the ball after all. 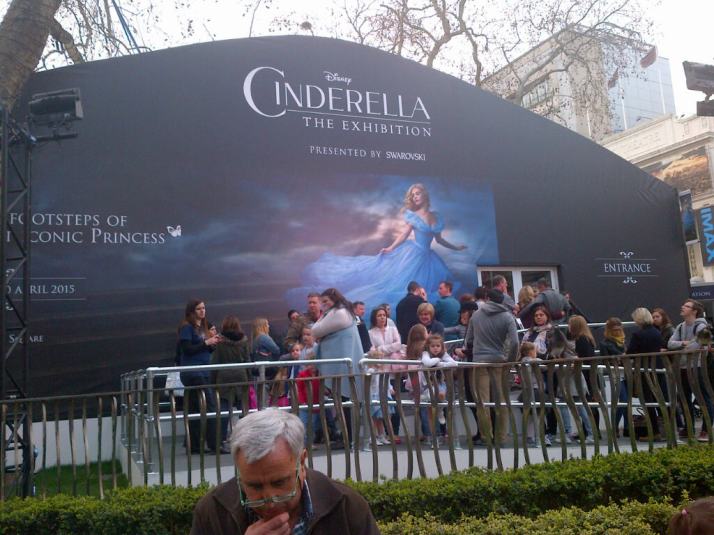 Swarovski an Austrian firm founded in 1895, collaborated with Sandy Powell – the costume designer for the film to add sparkle to the production. In all 1.7 million finely cut crystals are used in the film. The Step Mother’s dress is encrusted with black crystals and Cinderella’s ball gown looks magical with the crystal adornment. The fairy Godmothers dress and wand also feature crystals. Cinderella’s ball gown is made of 24 layers of tulle with a circumference of 11.6m. 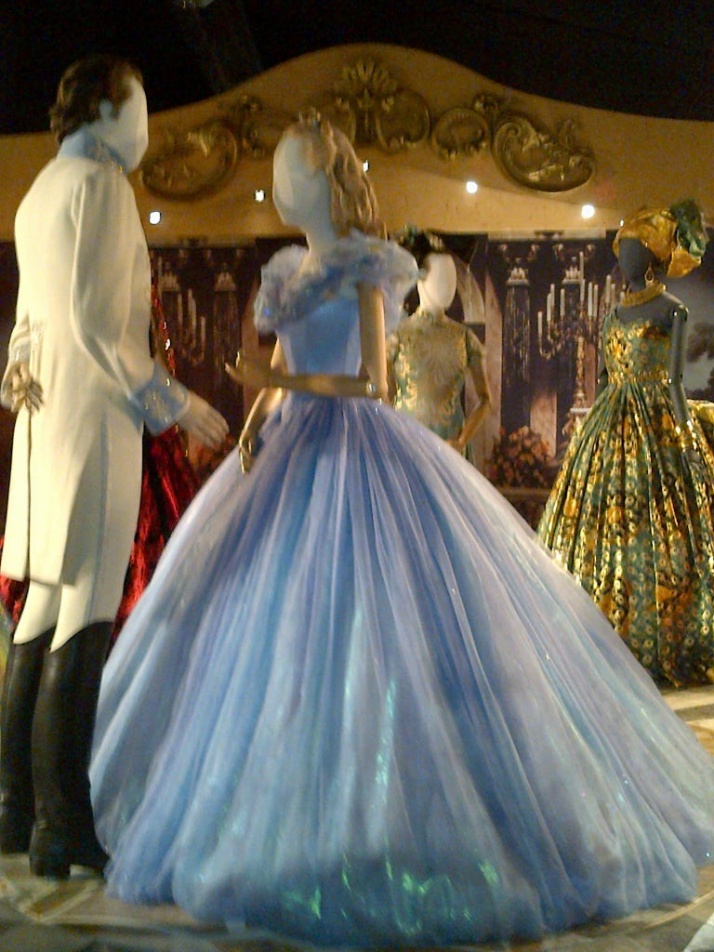 The prince and cinderella at the ball

The star of the exhibition and indeed the film was of course the glass slipper also made by Swarovski. The shoe has a 6 inch heel and has 221 facets in a light reflecting crystal blue Aurora Borealis coating and weighs just less than 1kg. It took 6 versions and 150 hours to create the final shoe. 4 pairs were made with each individual shoe costing £20,000. At the exhibition they took a photo and superimposed the glass slipper on your foot so that everyone could feel like a princess. 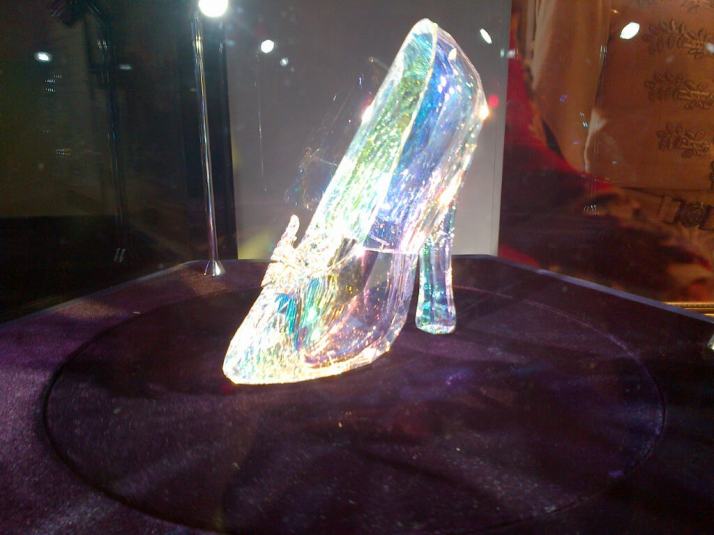 A princess for the day 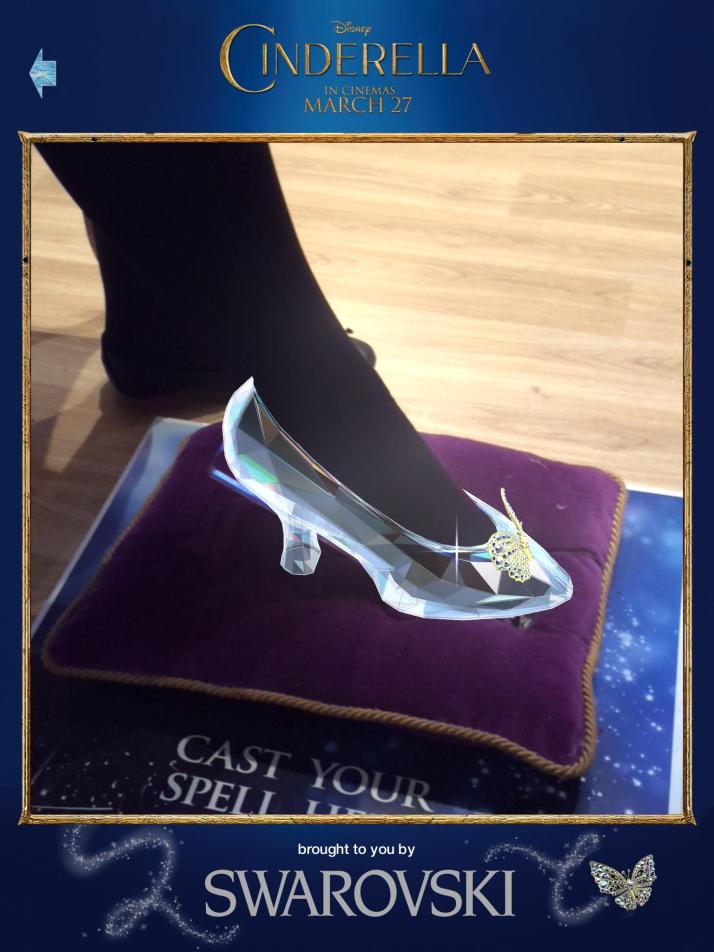 Mac released a special limited edition Cinderella make up range of which I adored the stroke of midnight eye shadow palette and the Royal Ball lipstick – sadly though supplies of them were limited and I was unable to purchase either. I did however get the Morgan Taylor Cinderella collection nail varnishes set which includes an iconic blue named ‘if the slipper fits’.

Being the shoe fiend that I am, I also couldn’t resist this cup from the Disney store. 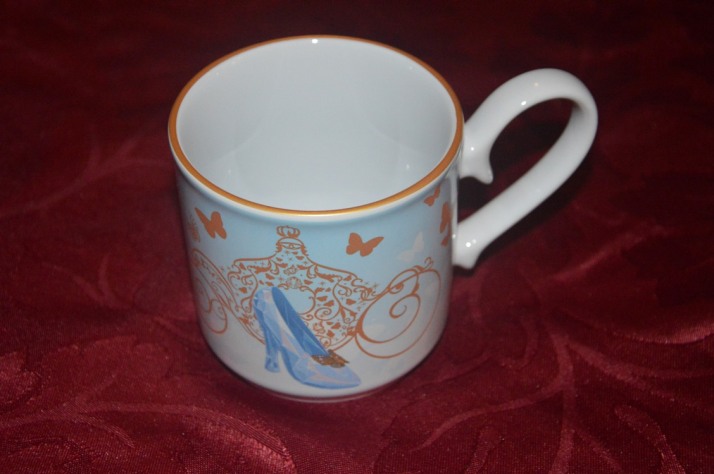 I finally saw the film last weekend and I wasn’t disappointed. The remake has been very loyal to the original but with deeper characters. The butterfly is used throughout to symbolise Cinderella’s transformation as well as her freedom. In the beginning of the film her father brings her a butterfly toy and her dress for the ball is also adorned with them as is the glass slipper.  I almost love butterflies as much as shoes so the glass slipper would be a dream come true. For the trip to the cinema I wore the outfit that I had planned to wear to the exhibition had I not ended up going straight from work. I thought given the saying that ‘Cinderella is proof that a shoe can change your life’ my t-shirt from New Look was very fitting. I paired this with a light pink waffle textured balloon midi skater skirt from New Look and then styled it up with these gorgeous polka dot 50’s style heels which my Mum treated me to some time back in Marks and Spencer and go so well with many different outfits.

Little girls everywhere have grown up hoping that their prince will come and they will live happily ever after as in the story; however as Carrie says in the Sex and the City film ‘in real life things don’t always work out like that.’ Happy ever after is different for every person and for some women that doesn’t include marriage. Are all women always looking for something else to complete their fairy tale ending? We are told now that women can have it all but do they always want it all? I know I am unusual nowadays but I for one will be quite satisfied becoming a stay at home Mum; surely women’s liberation is about giving us a choice of which path we want to take? Hopefully we all live happily ever after.

3 thoughts on “You Shall go to the Ball”