A few Saturdays ago, as the hairdresser straightened my locks I was much happier with the end result than I usually am as she went for more of a brown instead of a copper to contrast with the bleach highlights. Normally I wouldn’t indulge myself by having it blow dried and straightened but thought I would treat myself being that it was my brothers fiancés hen do that evening. Have you noticed how you tell your hairdresser more than you probably tell some of your friends? Going to the hairdresser’s is 2-3 hour gossip along with reading trashy magazines and being pampered – pure indulgence!

I carefully chose an outfit for the hen. 1950’s ‘A line’ midi skirts are making a comeback and this Harper skirt from Coast is stunning. I wore it with a plain black vest top to ensure the detail of the skirt was accentuated, some black suede heels and an old favourite – my black clutch with a butterfly embellishment from Faith. 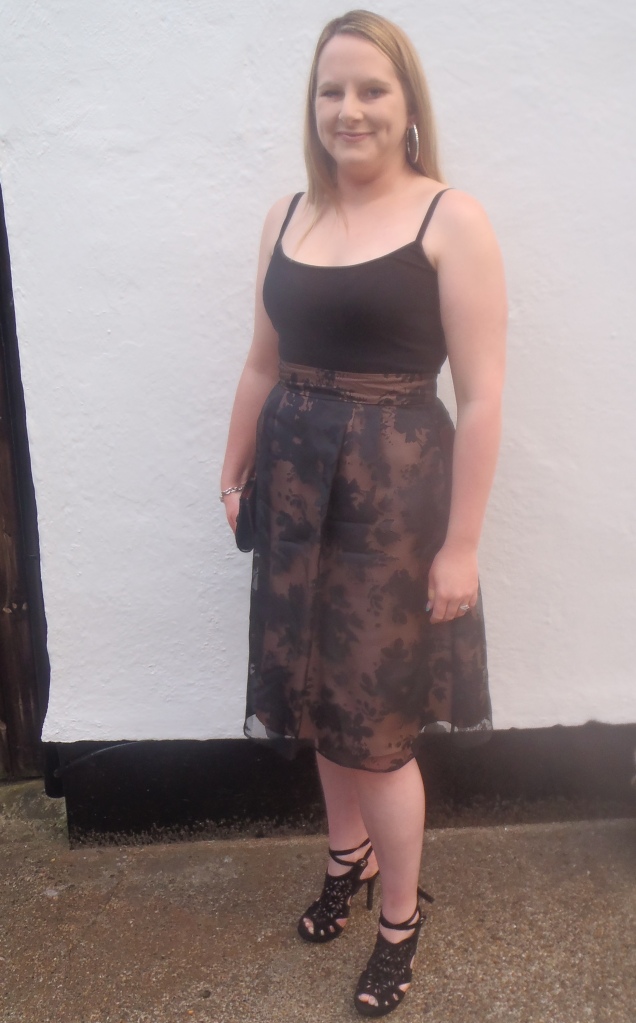 We began at the hen’s home where copious amounts of wine were consumed before we headed to the local Indian restaurant to her called Shampan. Here we furnished Jade with a ‘Bride to Be’ sash.

Cocktails and wine flowed. My Mum tried her first curry and wasn’t overly keen I don’t think but we all had a fabulous night which was rounded off with the fateful shots. We walked or should I say stumbled back to hers, me clutching the half finished bottle of complimentary wine and managing to narrowly miss tottering over in my heels which was more luck than judgement. Once at hers we had more wine before my husband ushered a reluctant me out of the door.

Sunday morning came round all too quickly and I think I woke still drunk! Nonetheless I set about trying to make myself look respectful for the wedding of my husband’s friend in Suffolk.

I wore this green butterfly dress from Oliver Bonas and accessorized with gold heels from Oasis and a gold bag also from Oasis. I opted for green (graffiti) Urban Decay eyeshadow to finish my look. I bought my husband a tie to co-ordinate. 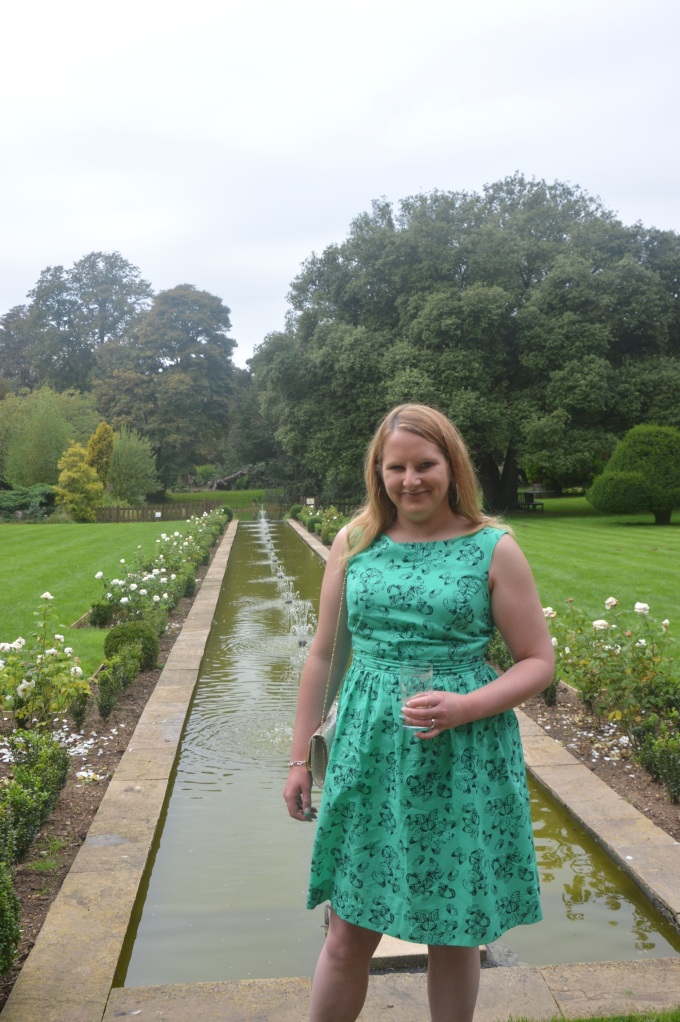 The wedding was held at Woodhall Manor – a grade II listed building near Woodbridge in Suffolk. The oldest parts of the manor date back to medieval times and it is simply stunning and set in vast beautiful gardens. 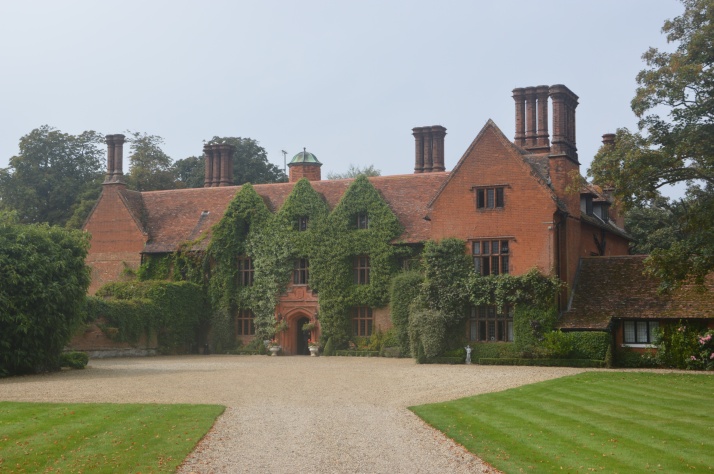 The ceremony was in these enchanting gardens – I had never been to an alfresco wedding before and they were fortunate enough to have a beautiful day for it. The chairs were set out with white covers and purple organza ribbon and white rose petals were sprinkled on the grass aisle between the rows of seats. The groom waited checking his watch by the archway at the front that had bird coups above. The bridesmaids, dressed in purple, a flower girl and two pageboys made their way up the aisle before finally the bride appeared on the arm of her father. She looked stunning in a beaded halter neck dress, carrying a purple bouquet and was clearly very emotional. After they had taken their vows; a white dove flew out from above where they were standing which was very romantic. White doves tend to symbolise love due to them being associated in Greek mythology with Aphrodite, the goddess of love. Doves also mate for life so are seen as symbols of monogamy and loyalty.

Whilst the photos were being taken, we chatted in the gardens with a glass of Pimms and a selection of canapés which included chicken satay, potato wedges, duck, prawns and cream cheese and smoked salmon tarts. Before long we were ushered inside for the wedding breakfast. In keeping with the medieval roots of the house the tables were named after medieval royalty. We found ourselves sat on the table called Lady Jane Grey. Lady Jane Grey was the eldest daughter of Henry Grey – the 1st Duke of Suffolk and great granddaughter of Henry VII. Edward VI nominated her to be queen on his death bed in July 1553, passing over his half sisters, Mary and Elizabeth. Mary claimed the throne some 9 days later and Jane was executed after some delay in February 1554 for high treason. The table plan, table names and place cards all had a purple swirly pattern on them, akin to what had also been on the invitations, to fit in with the colour scheme as well as giving a medieval grandeur feel to them. I sat for the first time at a wedding table with a place card with my married name on it which I was quite excited by.

The favours were small jars of hot chocolate, topped with white chocolate and marshmallows, which was different and they were decorated with a purple ribbon. As well as these they also had an old fashioned sweet table with little paper bags adorned with their names. The table was popular with both adults and children – you can’t beat a flying saucer or a fizzy cola bottle!

The meal was lovely and was followed by some very emotional speeches before we retired to the bar to start the evening do. They had a band which I thought was fantastic and quite unique these days. The band were called The Someones. The band formed in 2005 and have played over 700 gigs. They perform covers from 60’s up to the present day. They certainly made my day when they played Dakota by Stereophonics. The couple’s first dance was to Savage Garden’s ‘I knew I loved you’.

Much drinking and dancing ensued before we returned to our rooms in the manor. We woke in the early hours to find the light on so I guess we must have passed out when our heads hit the pillow. It was nice to wake naturally on a Monday rather than to the sound of the alarm. Breakfast was taken at the manor with all the guests and the bride and groom.

We wished them a happy honeymoon and then drove into Woodbridge to take coffee with a friend of mine and her partner who live nearby before driving home. Congratulations Adam and Esther – may you have a long and happy marriage.

Look out for another wedding blog soon on my brothers wedding!