Hi Readers, so sorry I have been absent from the blogging world for the last 7 months or so – wedding plans seem to be consuming most of my spare time.

When we got engaged in July – we both decided we would get married in about a years time – plenty of time to plan you would think?  Apparently not; as we made our way round venues and a wedding show people kept saying we had little time to plan and some venues get booked up two years in advance!  We started to realise that July and August are very popular and so decided to bring our wedding forward and set the date as 17th May 2014 – after all whenever you get married in the UK, sunshine cannot be guaranteed.  After bantering some theme ideas around, we selected a fairytale theme and the colour baby pink to compliment that. My other half bought me a fairy snow globe with May written on it as a cute souvenir. 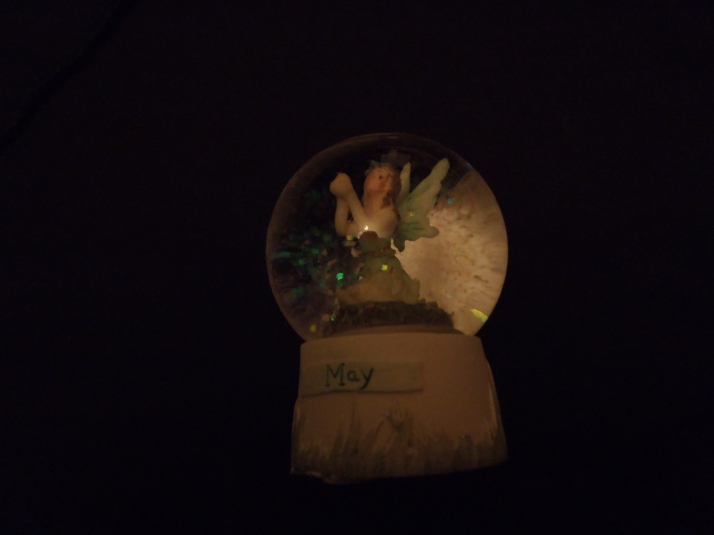 Funnily enough the first thing I booked was the horse and carriage with The Ostler, as when I made tentative enquiries with some companies, the dates were going fast.  I opted for the pumpkin carriage with white horses to fit in with the fairytale theme – I thought this would be fabulous until a couple of people likened it to the one Jordan had at her wedding – that rather took the shine off it somewhat!  Next we spoke to the church as it was very important to my other half to get married in the church he grew up in; it’s a shame however that most catholic churches are not very attractive from the outside it seems but at least our one is nice inside and of course it’s what it represents that is more important.  We then viewed three reception venues – The Barnyard, Hempstead House and Chatham Dockyard.  Hempstead House was our favourite until we saw the Dockyard and were blown away, therefore deciding it presented the best value for money and the best photo opportunities.  A-Form caterers were selected from the approved ones and with our parents we enjoyed a lovely taster meal of the wedding breakfast.  The chef at A-Form is a real character.  We both then felt we could relax a bit, knowing the big things were sorted.

A word of advice for anyone planning a Catholic wedding – you need to visit the local registry office to apply to get married – we assumed the church sorted all this but clearly not because Catholsism is not the official religion of the country.  Thankfully the Deacon mentioned it to us or the marriage wouldn’t have been legal!  We went and were quizzed to check we were a proper couple and thankfully we passed, lol.

At the end of August I went to Rome and Pompeii on a girly trip with my Mum.  We had a fantastic time – the weather was beautiful.  We visited all the major sites – the Colosseum, the Forum, the Spanish Steps and the Trevi Fountain.  We were both told off at the Trevi Fountain for putting our feet in – we were trying to recreate a picture my Mum had had back in the 70’s when she visited with friends!  I threw in a coin with my right hand over my left shoulder, as is tradition and made my wish, (sorry I can’t reveal it as I want it to come true).  It is estimated that approximately €3000 a day are thrown in it. 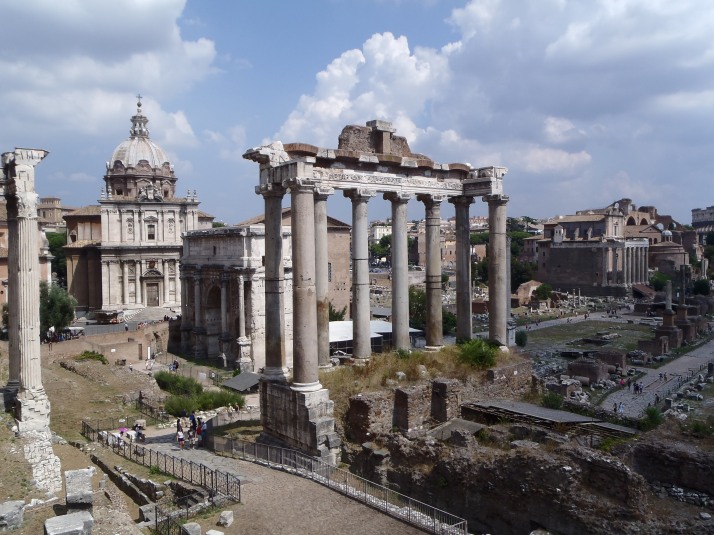 We also visited the Vatican city where we admired the ceiling of the Sistine Chapel, painted by Michelangelo between 1508 and 1512.  We were also fortunate enough to see the Pope’s address to the people. 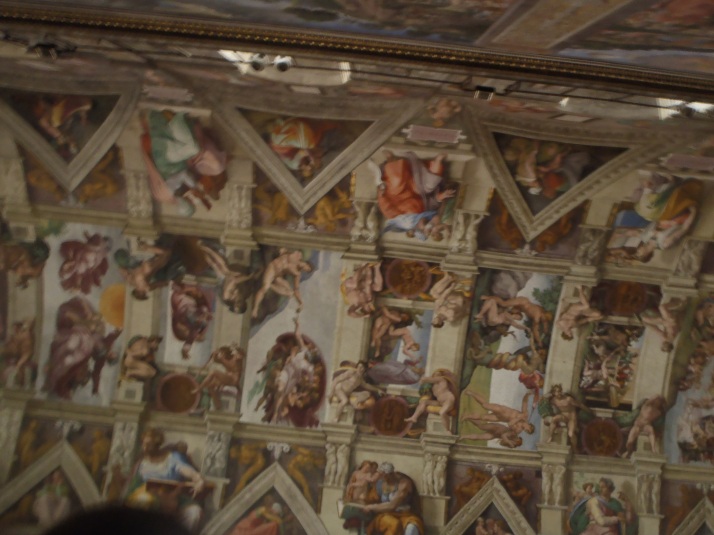 Ceiling of the Sistine Chapel

We travelled to Pompeii – it was amazing to see a preserved Roman town, which gives a wonderful historic insight.  The town was buried in ash during the 79AD eruption of Mount Vesuvius and because of the lack of air; many of the artefacts had been perfectly preserved when it was first rediscovered in 1599.  That same day we also walked up Mount Vesuvius – now a world heritage site.  It was quite a trek and there was a distinct sulphur smell as you neared the crater.  It is the only volcano on the European mainland to have erupted within the last 100 years – it last erupted in 1944.

The ruins of Pompeii

Mum and I in Pompeii with Mount Vesuvius in the background

We enjoyed some delicious Italian pizzas but the best meal we had by far was at ‘That’s Amouré’, a restaurant that was recommended to us, near to the Trevi Fountain.  The atmosphere was amazing with pictures of many film stars adorning the walls and the food was outstanding.  The restaurant was named after the 1953 hit by Dean Martin.

Once back in good old Blighty I rounded up a couple of friends and my Mum and we went in search of my perfect wedding dress.  It was so much fun trying on different styles and I was amazed to find that the princess style I thought I would go for really didn’t suit at all – I felt as though I couldn’t put my arms down by my side. ‘The one’ was discovered in Berketex and genuinely made me feel like a true princess especially when the tiara was added, as after all, as my little niece says, ‘a real princess needs a tiara.’  I will say no more as I don’t want to give anything away when my partner reads this blog.

As a tribute to my very dear Grandma, we decided to buy the wedding flowers out of some money she had left for me – that way I can still feel she is part of our special day.  I realised when the florist visited that I know very little about flowers but we eventually selected pink roses which are my favourite and some other complimentary flowers.

An added expensive that you don’t think about are chair covers for the reception; we sourced these from ‘Ambiance’ – white with a pink organza sash around; they are really so expensive for what they are but they do finish off the venue nicely.  We are lucky enough to have my wonderful aunty who is making our cake as a wedding present and it will have a fairytale castle on it, just as I always dreamt.  The photographer we are using is ‘Owens’ in Petts Wood as I have known the owner Jim for years.

It was time for me to purchase the most essential item in my eyes – my wedding shoes!  I have known for some time that I wanted the blue Manolo Blahnik’s which Carrie wears in the first Sex and the City film.  I located them on Barney’s New York website.  When they arrived I was like a kid in a sweetshop, my hands shoke with anticipation as I opened the lid and unwrapped them from their dust bag.  It was a real Cinderella moment as I slipped them on and they fitted perfectly.  They were somewhat of an extravagance but shoes are my thing after all and a bride must have her something blue!  My something old will be my Grandmothers garter that my Mum also wore on her wedding day and my something borrowed will be my Mum’s pearl necklace.

Christmas came and went and on 28th December we attended my cousins wedding.  I had long agonised over what was suitable attire for a winter wedding and eventually settled on a deep purple Coast dress, with a fur coat, silver sandals and a silver box clutch.

It was a crisp, sunny day and it was lovely to see the quaint church still decorated with Christmas decorations.  The bride looked stunning and one thing that was so romantic and unique was that before the ceremony, a song with the bride talking about her love for my cousin over the top of the lyrics was played.  Snowflake confetti was given out to add to the Christmas feel – only real snow could have made it anymore perfect.  By far one of the most innovative ideas I thought were the table decorations.  Each table had a set of white branches, wrapped in fairy lights with baubles on and on the baubles were the guest’s names.  The Christmas theme also stretched to tables named after the reindeers and cutlery in stockings.  We danced late into the night and my other half and I were the very last to leave the party, retiring to our hotel room. 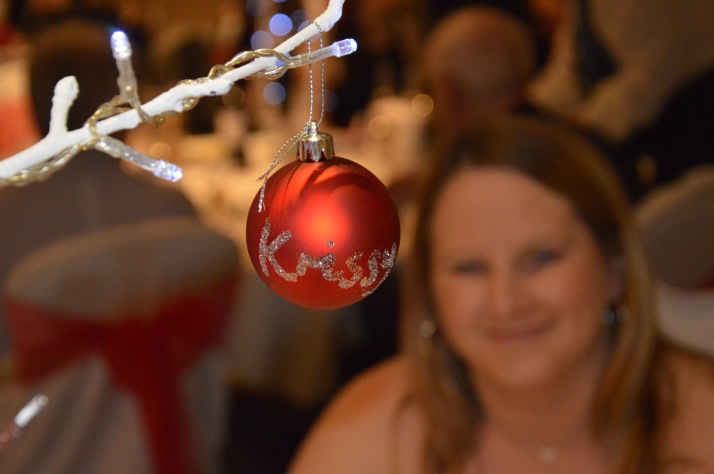 January saw the start of the diet.  The aim is to lose 1 ½ stones by the first dress fitting on 28th March.  This time there are no fad diets – just calorie counting, keeping to 1500 kcal per day wherever possible during the week – swapping chocolate for fruit.  If I can’t lose weight for something as important as my wedding then I never will.  My fiancé is also doing it so I have some support and his sister and her husband too.  The winner gets £20.  To date all of us are doing well but I think my weight loss is starting to slow so maybe time to incorporate some more exercise.  Other important beauty preparations have also begun to try and ensure I look my best on the day.  I am conditioning my hair with argan oil and using a Chanel eye cream and Clinique face moisturiser.  I am also planning to start whole body moisturising and wearing cotton gloves and socks to bed on my hands and feet.

A few weekends were taken up with doing the wedding invitations.  I think we were both breathing a sigh of relief when they were sorted – despite the numerous printer problems when we did the information sheets.  It was such a stressful task – it was nearly divorce territory before we even made it to marriage! Lol!  We chose a collection of invites named ‘once upon a time’ on the website Confetti which have a silhouette of a lady and a man.  Just a few more replies to be received and then we can start on the table plan.

We went to get the groom measured for his suit a few weeks ago and after he went with the tail coat I wanted, I did let him off the top hat!  The suits are being hired from a place called ‘Well Suited’ in Dartford and I highly recommend them as their prices are far more reasonable than Moss Bros.  Last weekend we had the first of our 3 marriage classes with the Deacon which were quite interesting.  This first one was around our family influences on our behaviours and what love means.  Love is a word used so often in society but when you try to define its meaning it is actually quite difficult.  The Oxford dictionary defines love as ‘a strong feeling of affection.’  CS Lewis said ‘love is not an affectionate feeling but a steady wish for the loved person’s ultimate good as far as it can be obtained’.  My definition was caring for someone more than you care for yourself and I also made the point that love grows.

In the spirit of love and fairytales one can hardly resist Olympia Le-Tan’s Love Story book clutch – a limited run of just 32.  If like me your budget doesn’t quite stretch to the £1050 price tag – why not opt for this black one from Aldo, a snip at £35.

My next blog will probably be after the hen night in April now so enjoy the early spring sunshine and perhaps dare to bare and get your feet into this season’s must have mules!  I fell in love with these ones from Topshop.

One thought on “Once Upon a Time…”