At the end of February, I finally achieved an item from my 30th Bucket List and flew out to India.  It was a wonderful escape from the miserable and long drawn out winter we are having in the UK.  The plane touched down in the heat of Delhi airport and we were ushered by our guides to a coach which dropped us at the Taj Hotel New Delhi;  after a chaotic drive through the streets of Delhi where knowing how to use your horn appears to be the only prerequisite for a driving license!  No time to relax in the beautiful, 5 star luxury of a hotel; we were whisked off to look at the Qutub Minar – the tallest minaret in India at almost 73m, which began construction in 1193 and had bits added by various Sultans.  In the complex also lies the tomb of Iltukmish who was the first sultan to be succeeded by his daughter – perhaps the start of girl power!

We were taught the first lesson of survival in India; when crossing the road, whatever you do, don’t look!  Curry was not dinner on the first night much to my surprise – rather a Vietnamese meal at one of the hotels restaurants.   The next morning we rose early and took the Shatabdi express train from New Delhi station to Kalka.  The station was a hub of activity with people carrying large amounts of luggage on their heads, stray dogs, beggars and people offering to clean your shoes for money.  I couldn’t believe the way people just wander across the tracks.

Upon arrival at Kalka, we transferred to the heritage toy train which is a narrow gauge railway that winds its way around the Himalayas on its assent to Shimla.

Shimla is a small mountain town which was used by the British to shelter from the heat of the summers in India; it certainly felt cooler than the heat of Delhi and we even spotted a distant mountain with snow on the top.  Shimla takes its name from the goddess Shamla Devi and was Shamla, then becoming Simla, until the compromise of Shimla was settled on.  This was to be our base for the next 3 nights.  We visited the Viceregal Lodge, which is the only building in Shimla to occupy its own hill.  Inside were photos and artefacts from the time of British rule in India including the partition table – where Lord Mountbatten signed the partition agreement at the end of British rule in India in 1947.

Shimla is famous for monkeys and you see many of these as you wander through the streets.

We were then taken to the Sankat Monchat Hindu temple which was very beautiful and a spiritual place.  Outside is a stall selling offerings relating to the 5 elements which Hindu’s offer to the gods.

Whilst in Shimla we also visited the Gaiety Theatre where the British would put on plays, scandal point where people have long met to gossip and a legacy of the British Raj; Christ Church – the second oldest church in Northern India.  I lit a candle here to remember my Grandma.  We even had a claim to fame as we were asked to walk down the street as extras in a Bollywood movie!  I was unfortunately struck down with Delhi belly on our final day in Shimla so did not get to partake in optional activities however I did take a dip in the luxury pool of the hotel and my other half and I  engaged in a few games of chess – fitting as chess was invented in India.  Slowly we were then woven back down the Himalayas to Kalka on the toy train once again; through pine trees, cactus and red rhododendrons (apparently the only non poisonous form of the flower which they use in jams).

It is heartbreaking to see the poverty on that journey with people living in no more than a shack juxtapositioned against the wealth of the hotels we stayed in.  People were by the line side relieving themselves because of the total lack of sanitation and washing was hung over fences to dry.  Despite this all the Indian people were accepting of their lot and the friendliest and most welcoming people I had ever met.

At Kalka we rejoined the Shatabdi Express and returned late at night back to Delhi.  Our next trip was into Old Delhi.  This is a complete contrast from New Delhi with dusty tracks rather than newly built highways.  We visited the Jama Masjid mosque which is the largest, most well known mosque in India, before boarding a rickshaw for a hair raising ride around the narrow shopping streets which engulfs all of your senses with the beautiful coloured sari shops, carts stacked with fruit and vegetables, the smell of food stalls and the glittering bangles catching the sun.  The wiring is unbelievable but somehow the chaos works just as it does on the roads. 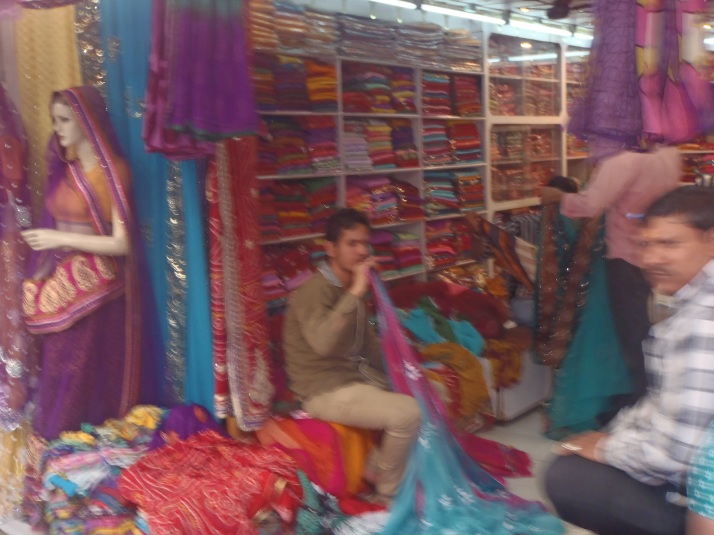 We later went to the Emperor Humayan’s tomb which is an early example of Persian influenced architecture and a precursor to the Taj Mahal.   The day finished with a trip to Gandhi Smriti which is a museum dedicated to Gandhi and also where he spent the last 144 days of his life.  Distressingly, his path to the place he held prayer and where he was shot is marked by footprints.

The following morning another early start saw us board the Shatabdi express train from New Delhi to Agra.  We were welcomed at the hotel in the traditional way with a red spot put on our heads (symbolising God’s blessing) and a flower garland draped around us. 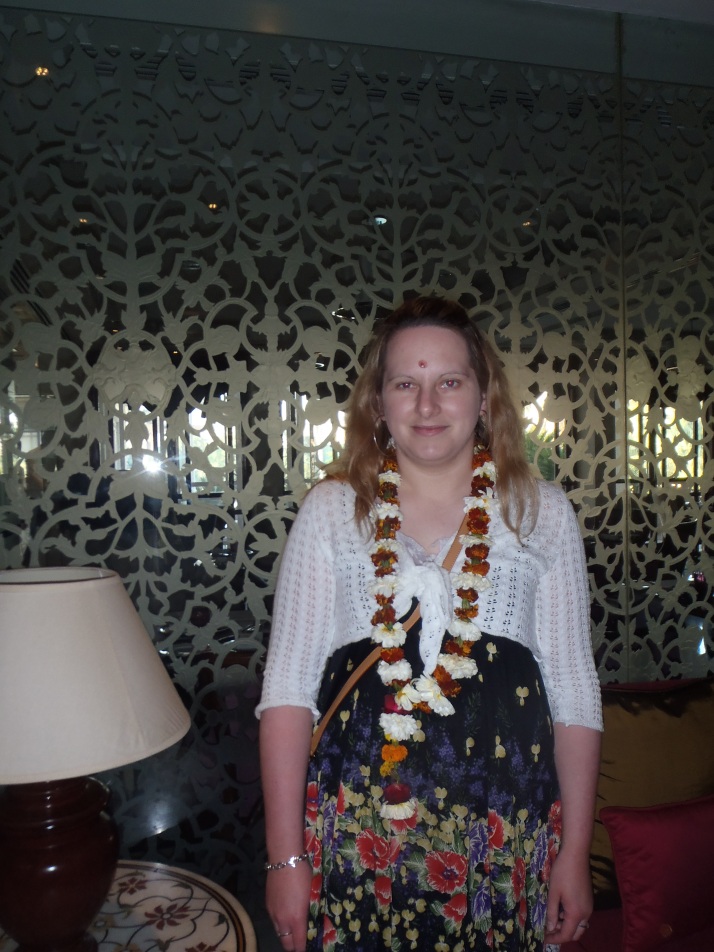 We indulged in breakfast at the hotel where I tried a traditional Indian breakfast delicacy before being taken to visit Agra Fort.  The afternoon saw us visit the world famous Taj Mahal which some claim to be one of the Seven Wonders of the World.  It is breathtaking and pictures just don’t do it justice.

That evening back at the hotel, I couldn’t resist consulting a palmist.  It was an enlightening experience in that I was told I will live until 87, get married at 30, have a boy at 32 and a girl at 35.  It will be interesting to see how much of this comes true.

We only stayed the one night in Agra and we were then on the road travelling to Jaiphur – the pink city via Fatehpur Sikra – founded in 1569 by the Mughal emperor Akbar.  We had 3 nights staying in Jaiphur at the luxury Taj Jai Mahal Palace Hotel.  We visited the Palace of the winds built in 1780 which is just a facade from which women of the Harem could watch the town life from.  Opposite this I found my own spiritual place – a shoe shop!  I bought a gorgeous pair of flip flops. 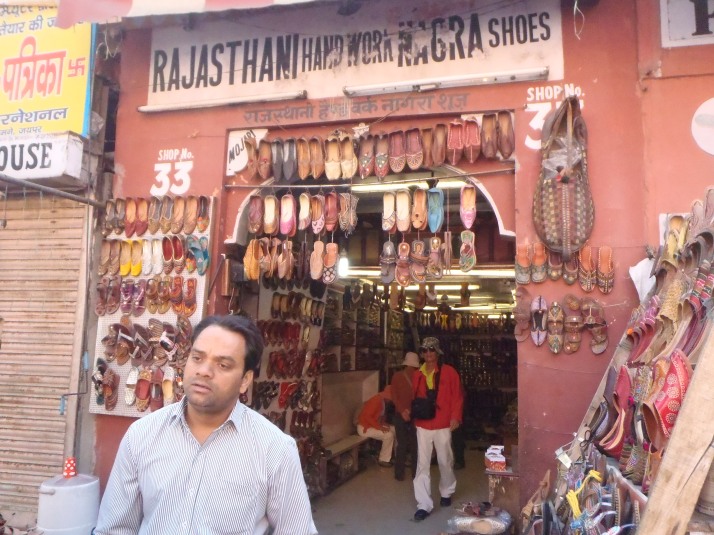 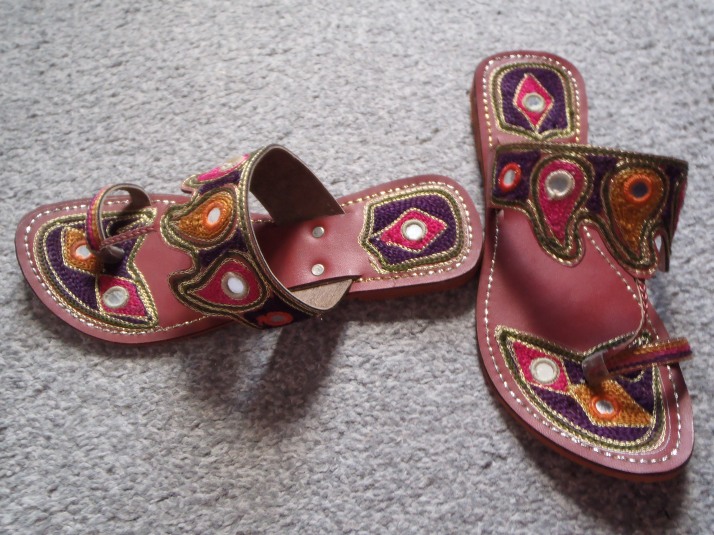 We were transported up to the Amber Fort by decorated elephants which were the highlight of my trip given my fascination with the animal.  I also was lucky enough that when we stopped for a photo opportunity of the palace on the lake, an elephant was passing and I got to hug its trunk.

The colours of the Saris in Jaiphur are a sight for sore eyes; legend has it that these wonderful saris are a consequence of potatoes not growing in Jaiphur and therefore women devoting their time to the textiles industry.  The shopping opportunities were great in Jaiphur and I couldn’t resist some of the gorgeous bangles, not to mention a wonderful white tunic.

One evening we were treated to entertainment whilst we ate in the form of Indian folk dancing of which we were also invited to take part in at points. 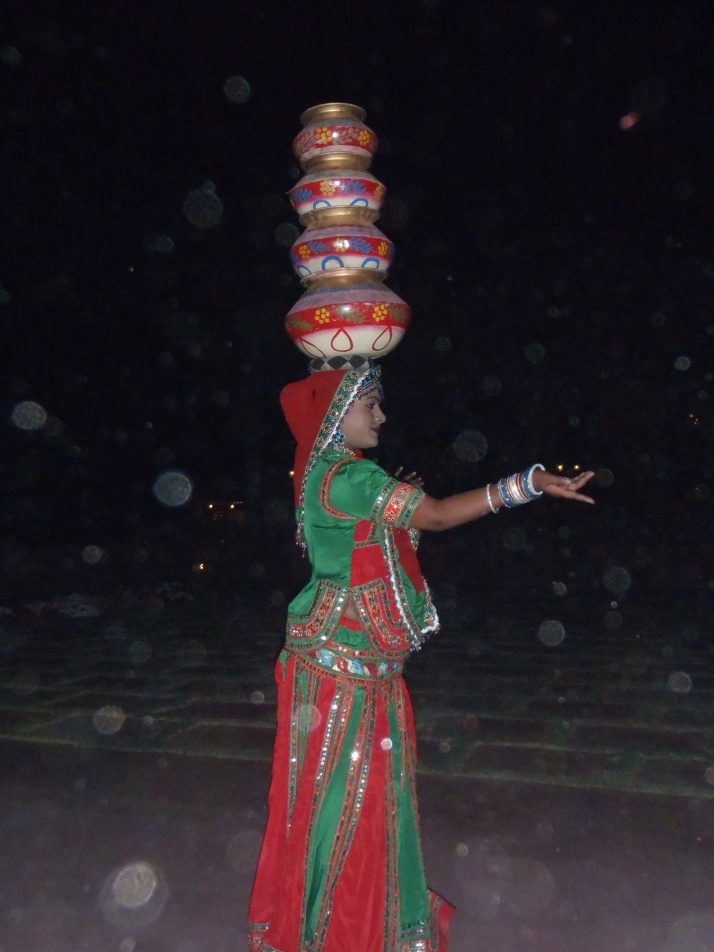 My other half and I were desperate for a ride on a tuk tuk and we got this opportunity whilst in Jaiphur and the very knowledgeable, helpful driver took us to see the monument of the last King of Jaiphur. 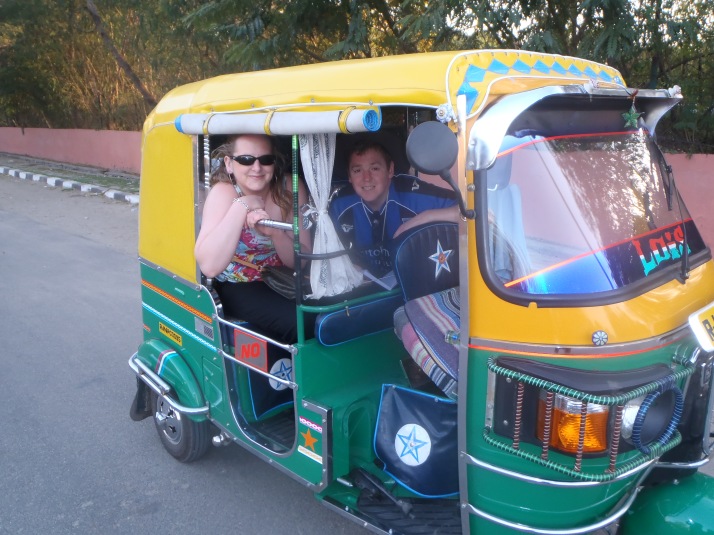 All too soon the last day of the holiday dawned and we were taken back to Delhi airport by coach to join our flight back to the UK.  On arrival back we craved fish and chips and think we will have a break from curries for the foreseeable future!  A true holiday of a life time to a cultural melting pot of religions and at least 24 official languages.

One thought on “A Great Rail Journey”